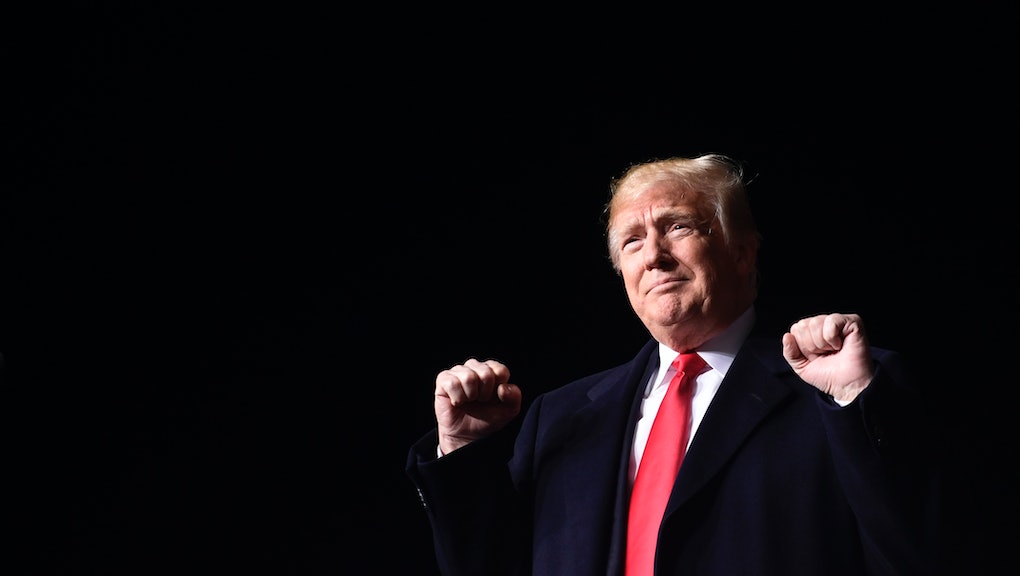 What does “nationalist” mean?

By now, news of the speech President Donald Trump gave Monday at a rally in Houston has likely reached anyone with even a passing interest in politics. What began with a now-familiar refrain — “We’re putting America first. It hasn’t happened in a lot of decades. ... We’re taking care of ourselves for a change, folks” — was followed by a remarkable series of reflections on the difference between globalism and nationalism.

After mocking Democrats as globalists, those Trump defined as caring less for the United States than the entire planet, he surprisingly — and unequivocally — embraced a different label.

There are many in Trump’s audience, and across the country, who likely agreed with his statement and sincerely felt he was right — that nationalism is an appropriate response to the issues of our times. However, I would suggest the word “nationalist” does rhetorical work, whether we recognize it or not, and that work is incredibly consequential.

As many observers have noted, Trump’s full-throated defense of the word “nationalist” and his urging of his supporters to do the same is a matter of deep significance. This portion of the speech has been rightly described by critics as an example of dog-whistle politics, the use of a term that might not overtly raise alarms but does generate the desired emotional and behavioral response in all those in range.

Americans who have long been fed a diet of coded racism are prepared to hear Trump’s comments for what they are: a defense of “us,” of white Americans against “others” whose perceived “free ride” on the back of taxpayers is now ending. Yet it has allowed them to avoid admitting to themselves that this is the specific message received.

At the same time, the racist subtext of this message is clear — and is heard quite clearly by those who are attuned to its frequency. This is why neo-Nazi outlet the Daily Stormer wrote afterwards in celebration, gleefully claiming Trump is “/ourguy/.”

The speech was, in many ways, hardly surprising, but part of a larger pattern formed by Trump’s rhetoric. He often invokes, quotes (often directly) or retweets white supremacist language and imagery, dismissing criticism by labeling it knee-jerk political correctness, as though he were simply flouting the ridiculous “rules” of polite society and just “telling it like it is.”

Repeatedly enacting this pattern of discourse makes sense, since it is quite effective — witness the crowd’s response to Trump’s assertion he is a nationalist. Such a reaction right before an important midterm election can generate a wave of enthusiasm for candidates similarly embracing Trump’s “nationalist” label, or at least those who oppose so-called “globalist” Democrats.

The problem, however, is these kinds of statements do rhetorical work that will continue and produce consequences long after the midterm election results are announced.

They galvanize extremist groups by signaling the president’s willingness to ally himself with them and their causes; they bring white supremacy and fascism into mainstream political and public conversation, giving them legitimacy; and they tell members of minority communities they will not be defended, or even protected, by the federal government — no small matter given the documented rise in anti-immigrant, anti-black, anti-Muslim and anti-LGBT violence since the 2016 election.

In one sense, this particular speech and Trump’s embrace of nationalism is no different from any of his similar acts, such as his adoption of the “America First” slogan used by 1930s American Nazi sympathizers.

However, there are some important and unique dimensions to Trump’s self-identification as a nationalist. First, it directly echoes language used by white supremacist groups and encourages its use by average Americans. “Nationalist,” of course, is the doctrine fascist dictators like Benito Mussolini and Adolf Hitler adopted to rally their citizens around racialist ideologies and eugenicist practices — which explains why Rep. Gregory Meeks (D-N.Y.) compared Trump’s remarks to ones made by Hitler.

“White nationalist,” similarly, is the term used by watchdog organizations like the Southern Poverty Law Center to classify and track hate groups organized around white supremacist ideology. As a result, Trump’s speech conveys to like-minded people the notion that he is, as the Daily Stormer recognized, “our guy.”

More insidiously, though, it also performs a tricky kind of rhetorical magic. By leaving out “white” from the term “nationalist,” it gives Trump the room to deny any overt racism. There is an ambiguity in the word itself — more than descriptive, it’s prescriptive. It draws lines around who should be included in the American nation and who should not; it repeats the fiction that America was the creation of brave (northern and western, not southern and eastern) Europeans whose traditions and insight then allowed others (black Americans, Asian immigrants, indigenous nations, Mexicans, and Central and South American immigrants, for example) to assimilate into an existing culture as long as they accepted these traditions as their own.

This inaccurate though oft-repeated narrative works to define the American nation as necessarily, essentially white, with all others defined as interlopers.

In this way, to all those who would support Trump’s use of the word, I would ask: Who embodies the American nation you would have us all embrace?