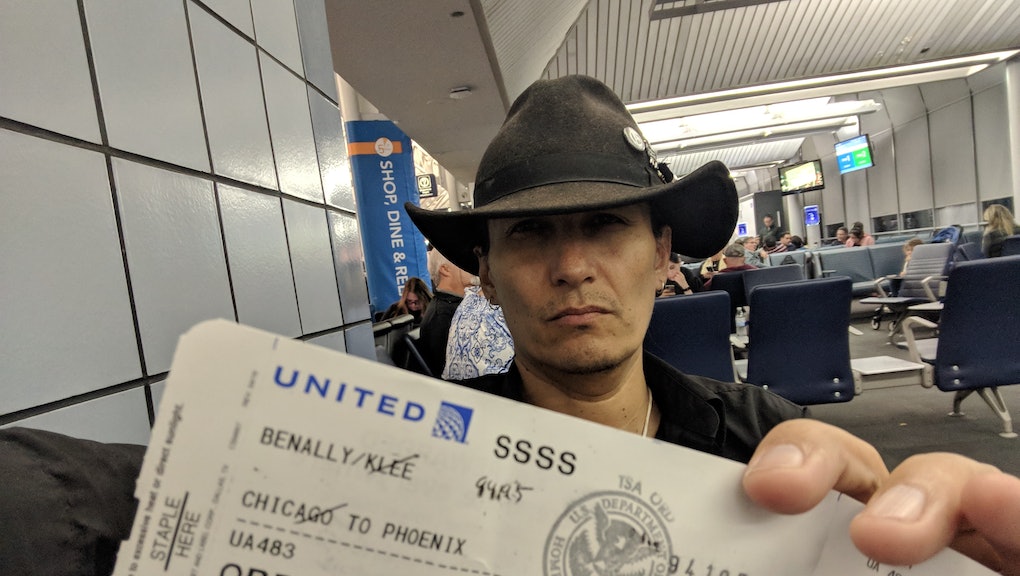 It was in July that Klee Benally first saw the Secondary Screening Security Selection designation on his boarding pass, when he was flying to New York from Arizona. He was hit with delays at the airport from the increased searches of his person and belongings and ultimately missed his flight.

After that experience, Benally, a Navajo (or Diné, in their language) activist based in Flagstaff, Arizona, decided to adjust his travel plans to account for future SSSS searches. Now, he takes as little as possible in terms of carry-on luggage and, in an interview with Mic, said he is mentally prepared for the questions and searches to which he will, without choice, be subjected.

The first time he experienced the extra scrutiny, airport security asked if he had recently been to Turkey or Iraq. Benally had not. He said he was also told by Transportation Security Administration personnel that he was “on a list.” He was separated from other passengers, his carry-on was thoroughly checked in front of him.

In September, when flying from Phoenix to Chicago and on to Milwaukee, Benally added an extra day on both ends of his trip to account for possible delays or missed flights. It was a good idea: The TSA kept his luggage in Phoenix for an apparent extended search. In total, Benally said he has received the SSSS designation on four separate flights across three airlines since July.

A longtime activist for indigenous rights, an anti-fascist and a former member of punk band Blackfire, which was active from 1989 until 2012, Benally said he’s spent the better part of 30 years traveling domestically and abroad without trouble.

The SSSS designation and its corresponding “selectee list” was created — like the no-fly list — in the aftermath of 9/11. The number of individuals on the list and the criteria to place someone on it is a well-kept secret. The designation suggests Benally’s placement on a watchlist, or perhaps as part of a domestic terror investigation in which he is a suspect. This may indicate such a probe, a former FBI agent said, or it may be part of an increase in surveillance of protesters under the administration of President Donald Trump that harkens back to the George W. Bush administration — or perhaps both. Nevertheless, there appears to be a double standard with who receives the SSSS designation.

But Benally says he doesn’t feel especially singled out. He noted this sort of treatment is something Muslim “brothers and sisters face every day.”

“[I’m] not surprised when I go into the airports and face further scrutiny,” Benally said. For him, the SSSS designation is part of the United States’ history of targeting political dissidents. “We have to wake up to the reality of this political environment and the United States’ political legacy,” he added.

Reports in the years following the 9/11 terrorist attacks showed that critics of the Bush administration were often taken aside for SSSS screenings, raising concerns about the list being used to infringe on political speech. When asked if he could pinpoint a reason for possibly being watchlisted, Benally said the “change in administration” after Trump’s election was the only major difference he could think of.

Michael German, a former FBI agent and Brennan Center for Justice’s Liberty and National Security Program — who spent a portion of his FBI career undercover with far-right and anti-government extremists — said it’s difficult to determine how much the Trump administration has impacted surveillance of activists, due to the opacity of federal law enforcement and anti-terror infrastructure.

“Most of the documents we see … are years old” and come from Freedom of Information Act requests and lawsuits, German said in an interview.

But the SSSS designation “probably indicates the FBI has an open preliminary or full domestic terrorism investigation” in which Benally is a suspect, German said. Although “there are other ways for law enforcement officers to put people on the terrorist watchlist,” he added, “the recent and aggressive FBI investigations of indigenous protest groups” makes a terror investigation “likely.”

Leaked documents show the protests at the Standing Rock Indian Reservation, the last place Benally traveled to before noticing the SSSS designation on his boarding pass, was a turning point in tactics used against Standing Rock protesters. Efforts to stop the Dakota Access Pipeline, led by tribes of the Sioux nation, reached a zenith at the end of 2016, as indigenous water protectors captured the world’s attention in their resistance to the pipeline, which threatens water on their lands, which they hold sacred.

The leaked documents, which The Intercept published in May 2017, show that Energy Transfer Partners, the company building the pipeline, hired TigerSwan, a mercenary and security firm, to “defeat pipeline insurgencies.” The FBI’s joint terrorism taskforce also investigated Standing Rock, attempting to contact organizers, in what German called a form of “harassment.” More than 800 individuals were arrested during the anti-pipeline protests, and 670 had charges brought against them.

“The FBI is relentless in its focus on environmental activists as terrorists,” German said.

Eco-terrorism has been considered the greatest domestic terror threat by the FBI since at least the early 21st century, even while the bureau has been “acknowledging there [has not been] a single homicide” because of environmental activism, German continued.

Furthermore, movements, such as Antifa and Black Lives Matter, both of which call out police violence and the far-right, have been targeted by law enforcement and even the U.S. Army. Many viewed the trials of anti-fascists who were arrested for protesting Trump’s inauguration — which saw over 200 indicted with felonies but ended in July when the remaining charges were dropped after roughly 18 months of various court proceedings — as an example of federal law enforcement’s attitude towards Antifa.

Simultaneously, far-right rallies have turned deadly, and anti-government groups like the Bundy family occupied government property and held a standoff with federal authorities, but “there isn’t that same sort of attention [from the FBI],” German said. Members of the Bundy family have received extra scrutiny from the TSA. But they’ve also received presidential pardons from Trump.

Eye in the sky

The extra scrutiny anti-fascists, environmental activists and Muslims face is often made worse by the TSA’s own programs.

These techniques “are neither scientifically valid nor workable in practice,” according to Hugh Handeyside, a senior staff attorney for the ACLU’s National Security Project, who focuses on watchlisting and racial and religious discrimination.

“In fact, the studies and academic literature in the TSA’s possession directly refuted the validity of numerous behavioral indicators — for instance, yawning, averting one’s gaze or whistling — that TSA was nonetheless relying on to identify purportedly deceptive travelers.”

If one suspects they are on a watchlist, getting their name removed “is a due process nightmare,” Handeyside said.

“The government doesn’t even tell people whether they’re on a watchlist, let alone provide reasons or a meaningful opportunity to correct errors and get off the list. The result is that people can languish on watchlists indefinitely,” Handeyside concluded.

The Transportation Security Authority did not respond to Mic’s request for comment.

Benally says that he isn’t sure if he will seek redress. At this point, he’s adapted his travel plans to adjust for SSSS searches. These days he takes as little as possible for carry-on luggage and is mentally prepared for the questions and searches to which he will, without choice, be subjected to.

Even if he randomly targeted by travel patterns or an algorithm, “it demonstrates the lengths the state is going through to target folks … it shouldn’t be normalized.

“What happens when these targeted screenings happen in the street?” He asked. “How far will the state go to establish its security?”