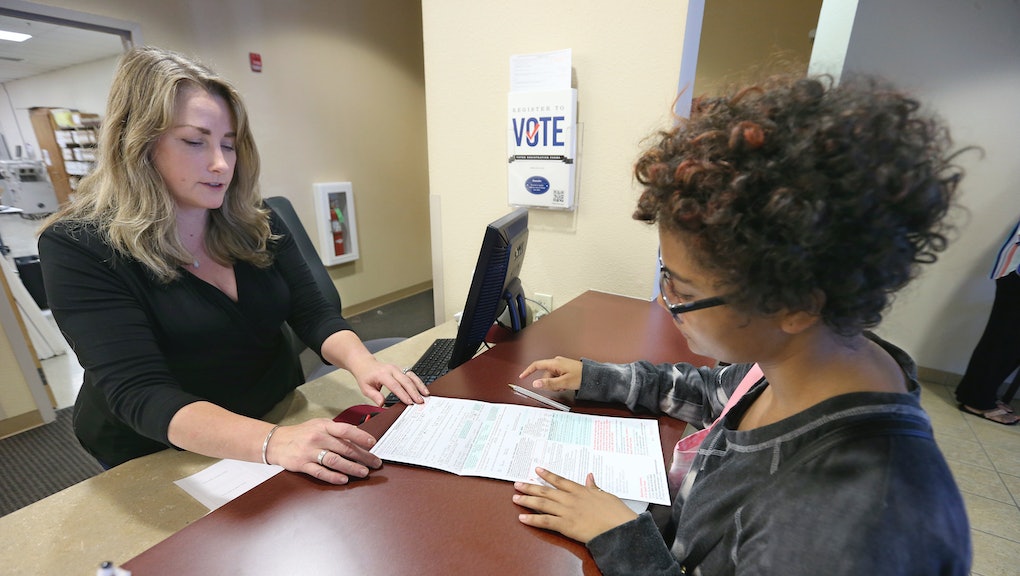 For then-high school senior Taylor Mackenzie, Feb. 14 was much more than just another Valentine’s Day. It was the day of the school shooting at Marjorie Stoneman Douglas High School in Parkland, Florida, and the day that marked the start of her role as a student activist. A month later, Mackenzie and three other students organized a March for Our Lives event with a turnout of more than 5,000 in Honolulu.

“I really wasn’t that politically engaged until last year,” Mackenzie, who is a freshman at Seattle University, said in an interview, referring to the 2017-2018 school year. “After the Parkland shooting, there was a rush of younger people who were speaking out. For once in my life, people looked at me and thought I had something to say.”

The political engagement of students like Mackenzie ahead of the Nov. 6 midterm elections is the subject of a newly released nationwide survey of first-time voters. The Education Week Research Center surveyed more than 1,300 18- and 19-year-olds who have not yet voted in a general election in an effort to understand their experiences in the current political climate.

“We were really interested to see if some of the student activism after Parkland had resulted in students being more politically engaged or more interested in voting,” Holly Yettick, EWRC director, said in an interview. “We also were interested in learning more about young, first-time voters’ views in the wake of this era of unprecedented political division in our country.”

Nearly two-thirds of the young people who took part in the Education Week survey planned to vote in the November 2018 general election — an optimistic estimate given that the number of 18- to 19-year-olds who cast ballots in the 2014 midterm elections was the lowest turnout in the previous 40 years. But other research gives reason to be cautiously hopeful. Another survey from Tufts University found that 34% of young people age 18-24 were “extremely likely” to vote and that voter registration among young people is up.

“I’m excited that there seems to be this movement to get more people to vote,” Mackenzie said. “I think that voting is so important even though gerrymandering and the way our election system is currently set up makes it feel a little pointless sometimes.”

According to Education Week, the top three reasons young people cited for voting was they believed it was good for the country, they saw voting as their civic duty, and they wanted to vote for or against the Trump administration. Miah Miller, a freshman at Columbia University, acknowledges young people’s poor track record with voting, but still sees it as of “utmost importance.”

“We’re the ones who are going to be dealing with the effects of everything that’s happening in Congress and in the White House for years to come,” he said in an interview.

Derek VonDrehle, a registered Democrat and high school senior in Denver, feels that it’s necessary to pick a political party if he wants his vote to matter. “I don’t think there’s any way around partisanship,” he says. “It’s just picking the side that represents more of my values.”

The third of respondents who did not plan to vote cited a lack of interest in voting, unfamiliarity with the issues and candidates, and a dislike of the candidates who are running. Twelve percent reported that they didn’t know how to register to vote.

Even among young people who do plan to vote, many are not enthusiastic about the candidates they are supporting. Some, such as VonDrehle, describe their choices as “the lesser of two evils.”

The majority of respondents were in the middle of the political spectrum, describing themselves as “moderate.” Thirty-five percent identified as “liberal” or “very liberal,” while another 30% were “conservative” or “very conservative.”

Milo Flint, a freshman at the University of Idaho in Moscow, Idaho, describes himself as a moderate. He takes an exploratory approach to politics, trying to understand the perspectives of both parties. He’s planning on voting for Democratic candidate Paulette Jordan for governor.

“It seems to me that she’s really making an effort to be a nonpartisan candidate, trying to make amends between some of the political division in Idaho,” Flint said.

Alex Velez, a 19-year-old first time voter from New York, considers himself to be “in the middle, leaning conservative.” Like many voters, he’s still undecided on who he’ll support in the midterm election. “It’s really difficult for me to decide something like this,” he said. “It always seems like both sides are more radical than I am. I’ll probably go Republican down the ticket.”

According to Education Week, the Parkland shootings were the top influence on young people’s political engagement, followed by reaching voting age and “Donald Trump and his administration.” Forty percent of survey respondents reported that their political engagement has increased in the last two years, while another 43% said it has remained the same.

Miller began to get more politically involved following the 2016 elections. “Before that, [politics] weren’t on my mind that much, because we had Obama,” he said. “And I was so lucky to grow up with him as my president, because he fought for everything I naturally believed in. And then to have someone opposed all those ideas and beliefs, it made my mind spin and I got super politically engaged and active.”

Miller’s political engagement increased even more in the aftermath of the Parkland shootings. He says it hit him really hard because the lives of the Parkland students, who are the same age as he is, were changed forever just months before graduation. His high school didn’t allow them to participate in the national walkout, so he and several classmates organized an assembly where they talked about the impact of gun violence.

“Holding the assembly was crazy for me because I had an incredible fear of public speaking,” Miller said. “So to not even stutter … while I had to speak in front of my student body, shows that my political engagement was … at a new peak.”

The most pressing economic issues on young people’s minds were the high cost of living, the general economy, the gap between the rich and poor, and taxes. The most important social and political problems were school shootings; guns and gun control; race relations and racism; immigration; crime and violence; poverty, hunger, and homelessness; and the media.

Bonnie Manning, an 18-year old first-time voter living in Louisville, Kentucky, sees “the ability to survive” as the top issue facing young people right now. “I have friends that are working three jobs and talking about having to choose between paying for the medication, that could kill them if they didn’t take, and their rent,” she said.

She adds that in many ways she’s voting for the people in her life on issues such as health care and LGBTQ rights. “I look at them and they are struggling,” she said. “I’m voting against the things that are actively happening since the Trump administration took office and voting for the people I care about and their ability to survive.”

Another issue, which was not mentioned in the Education Week Survey, at the forefront of young people’s minds on both sides of the political aisle is the divisiveness of the current political climate. Willow Crites, a freshman at the University of Idaho who considers herself to be moderate, is concerned about the split between Democrats and Republicans. “I can sympathize with people on both sides of the political spectrum, but it worries me a lot when people don’t feel like they can sit down with people from the other party and find common ground,” she said.

For his part, Velez is pessimistic about the country’s future, especially if Trump is re-elected in 2020. “You have people like the Proud Boys on the right side who go around to these protests and instigate fights with leftists,” he said. “And then you have people like Antifa who go to protests and instigate fights with people on the right side. If these groups can grow and gain more and more power, I can’t see how there won’t be an inevitable clash.”

Living in the college town of Moscow, Idaho – a blue stronghold in one of the most Republican states in the country – has given Flint a nuanced perspective.

“I think living on a blue island in a red ocean and interacting with people from both of those areas makes me sort of a negotiator,” he said. “Many of us live somewhat sanitized lifestyles in the inner city or in the heartland that prevent us from hearing the other person’s story and understanding their arguments…When we quit listening to each other, when we can’t talk openly and cordially around the table at Thanksgiving because we blame the ‘others’ for things outside their control, that’s when division becomes dangerous.”