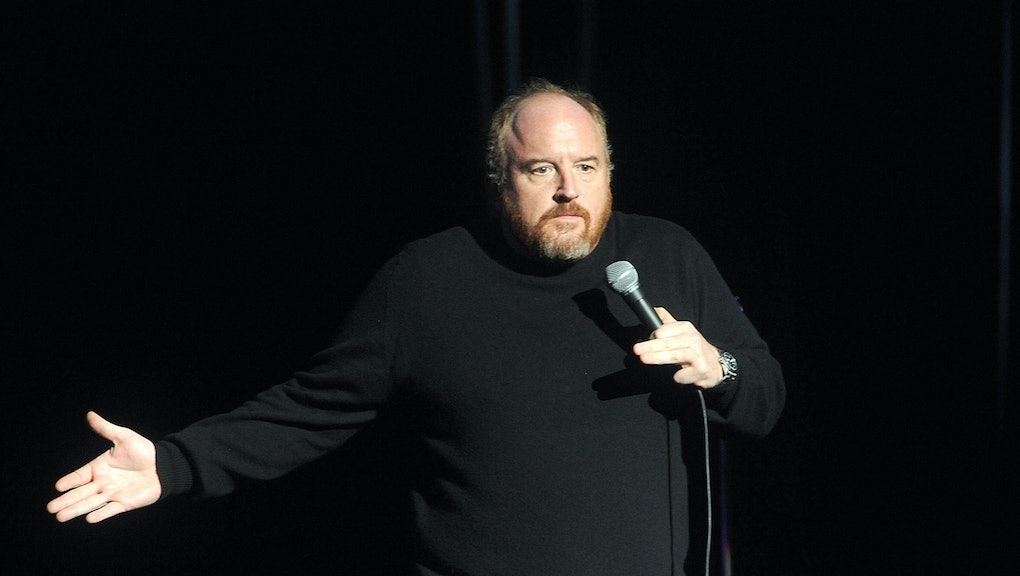 Comedian and admitted sexual harasser Louis C.K. did another stand-up set at the Comedy Cellar in New York City on Monday night — only this time his appearance wasn’t a surprise, because he was on the schedule. Per the New York Times, C.K. has performed multiple unannounced sets at the Comedy Cellar since he first returned to the club in August, but Monday night’s set was the first time in 2018 that the Cellar advertised that C.K. would be performing.

He reportedly performed at both the 9:30 and 11:30 shows on Monday night, and, according to the Times, the news that C.K. would be onstage caused some passersby to try to get standby tickets. But anyone entering the club to see C.K. also saw the protesters outside — Jennifer Boudinot, 37, and Lana McCrea, 27, who stood outside the venue to take a stand against C.K.’s apparent career rehabilitation.

Boudinot, who was holding a sign that said, “When you support Louis C.K., you tell women your laughter is more important than their sexual assaults and loss of their careers,” told the Times in an interview, “Every female comedian [C.K.] has harmed deserves a place on the Comedy Cellar stage 100 times before he should be allowed back on the stage.”

C.K. was accused of sexual harassment and misconduct by five women in a report published in the Times in November. The women, many of them comedians themselves, described similar encounters with C.K. — saying that he masturbated in front of them, or over the phone, without their consent.

In a statement to the Times shortly after that report was published, C.K. said that the women’s stories “are true” and the he was “remorseful of [his] actions.” But, less than a year after admitting to the allegations against him, C.K.’s comeback appears to be chugging along — with support from the owner of the Comedy Cellar, Noam Dworman, who recently said to the Times’ podcast The Daily that C.K. is “not banned by any means.”

C.K. even briefly acknowledged the allegations against him on Monday night, according to the Times. “So what kind of year have you guys had?” C.K. said to the crowd, before adding, “They tell you that when you get in trouble you find out who your real friends are. It’s black people, it turns out. They’ll stick by you.” Later he told the audience, “I think even hell you can survive. Hell is not that bad. I’ve been there.”