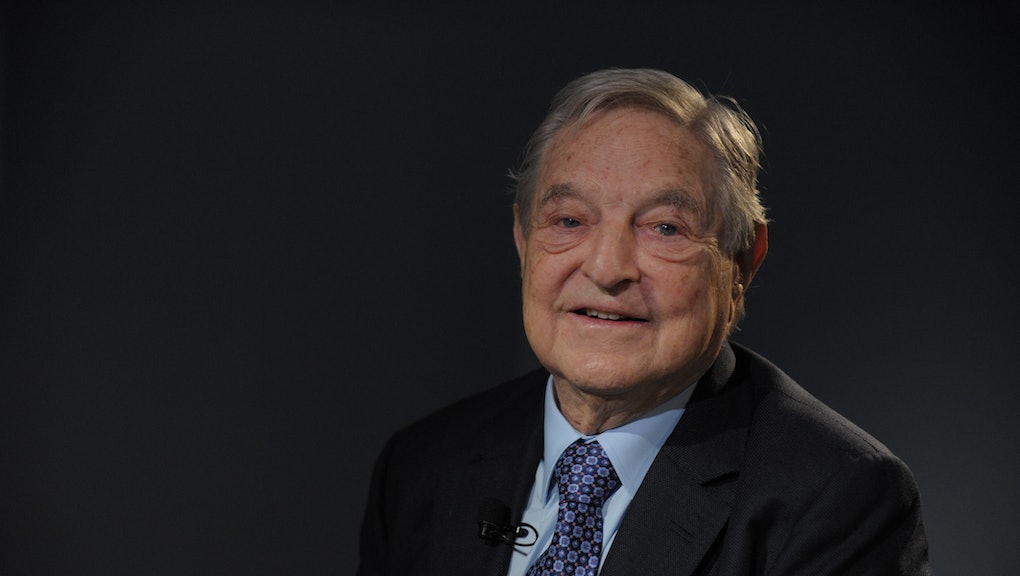 President Donald Trump and the Republicans have continued to push dangerous, baseless and frequently anti-Semitic conspiracies about George Soros — even after a pipe bomb was sent to the liberal philanthropist’s home and an attack on a synagogue.

Over the last month, the president and his allies have cast Soros as the puppet master behind the “very rude elevator screamers” protesting Brett Kavanaugh’s Supreme Court confirmation, the migrant caravan slowly heading north toward the United States border and other recent targets of Republican outrage.

The attacks have continued in recent days, despite a Trump fanatic allegedly sending improvised explosive devices to Soros and other critics of the president just last week. What’s more, those attacks have continued to traffic either explicitly or implicitly in anti-Semitism — even in the wake of Saturday’s mass shooting at a Pittsburgh synagogue.

But who is Soros, and how did he become the right’s biggest villain?

Soros, whose family hid their Jewish identity to survive the Nazi invasion of Hungary in the 1940s, began bankrolling Democratic and humanitarian causes around the world after making billions as an investor.

Soros had been a target of anti-Semitic conspiracies from right-wing leaders around the globe dating back at least to the 1990s, but didn’t fully take off as a target of the U.S. right until the 2000s, when he emerged as a harsh critic of then-President George W. Bush and began an effort to create a network of funding for Democrats.

Fox News has arguably led the charge against Soros, with its attacks on the supposedly “dangerous” hedge fund manager frequently taking a notably anti-Semitic tone. In 2010, then-Fox News host Glenn Beck infamously spent nearly an entire week’s worth of shows torching Soros as the “puppet master” behind a plot to destroy America. Though Beck made a number of controversial and misleading attacks on Soros during the string of shows, it was his characterization of the teenage Soros as a “Jewish boy helping sending the Jews to the death camps” in particular that drew a tidal wave of backlash.

“Glenn Beck’s description of George Soros’ actions during the Holocaust is completely inappropriate, offensive and over the top,” Abraham H. Foxman, then-national director of the Anti-Defamation League, said in a statement at the time. “For a political commentator or entertainer to have the audacity to say — inaccurately — that there’s a Jewish boy sending Jews to death camps, as part of a broader assault on Mr. Soros, that’s horrific.”

Many of Fox News’ claims about Soros seem to have remained remarkably consistent over the last decade-plus.

Former Fox News host Bill O’Reilly has been accusing Soros of attempting to “[change] the basic fabric of this country” since at least 2007, when he aired a segment in which a guest referred to Soros as “Dr. Evil” and claimed that he “really hates this country.” Just Monday, O’Reilly described Soros as a dangerous “zealot” in an interview with the right-wing Newsmax.

Through his Open Society Foundations, Soros does contribute large sums of money to progressive causes. But conservatives have often painted his philanthropic and political donations as nefarious, and accused him of directly sowing discord within the United States.

Which brings us to today.

The far right is continuing to spread baseless conspiracies about Soros, blaming him for everything from Colin Kaepernick’s NFL protests to the Women’s March to alleged child molester Roy Moore’s failed Senate bid.

Black Lives Matter? It’s all a Soros plot to advance “anti-capitalism,” according to controversial ex-sheriff David Clarke in 2017. The deadly alt-right rally in Charlottesville, Virginia? It was created by Soros and the left to make conservatives look bad, according to InfoWars conspiracy theorist Alex Jones in a wild claim echoed in 2017 by Rep. Paul Gosar (R-Ariz.). The Parkland, Florida, shooting survivors’ push for gun control in 2018? That had Soros’ fingerprints on it, too, some on the right falsely claimed.

The Soros conspiracy theories may abound on the fringes of the American right, but they can be embraced by more mainstream Republicans, too.

Before Trump claimed without evidence that Soros was paying demonstrators to protest against Kavanaugh, his nominee to the Supreme Court, Sen. Chuck Grassley (R-Iowa) seemed to endorse the conspiracy theory in an interview on the Fox Business Network.

“I have heard so many people believe that,” the Senate Judiciary Committee chairman said. “I tend to believe it.”

House Majority Leader Kevin McCarthy on Oct. 24 accused Soros, Tom Steyer and Michael Bloomberg of attempting to “buy” the upcoming midterm elections. Soros, Steyer and Bloomberg are all Jewish, and the tweet was regarded by many as anti-Semitic.

The Saturday shooting, which left 11 dead and others wounded, appears to have been at least partly inspired by a Soros conspiracy theory that Fox Business Network continued to push even after the Saturday attack.

The right wing has been pushing a baseless conspiracy theory that Soros is funding the caravan of migrants from Central America heading toward the U.S. Trump has been stoking fears about the caravan in an apparent effort to rile up his supporters ahead of the midterms.

Robert Bowers, the 46-year-old alleged Pittsburgh shooter, apparently believed in conspiracy theories that the caravan was a Jewish plot.

Some members of the right, including Rep. Matt Gaetz (R-Fla.), have directly named Soros in their conspiracy theories about the caravan.

Trump has faced criticism for his rhetoric toward Soros and other of his political opponents in the wake of the recent bomb scare and synagogue attack, with many calling on the president to tone down his language.

But the president, who laughed as his supporters chanted “lock him up” in reference to Soros at an event Friday, has been clear he doesn’t plan to change.

“I could really tone it up,” he told reporters of his rhetoric Friday.