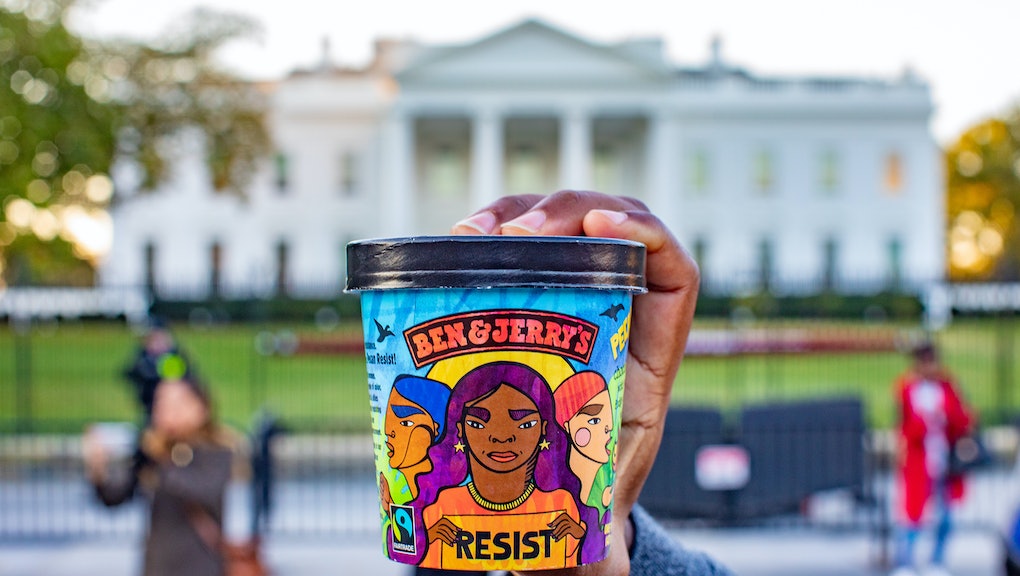 On Tuesday, Vermont ice cream brand Ben and Jerry’s announced the arrival of its most controversial flavor yet, “Pecan Resist.” The nutty pint is aimed squarely in the face of the Trump administration.

“The genesis for Pecan Resist was born in the past two years, and taking a look at what we see as a more regressive approach that the Trump administration is taking to a lot of programs and a lot of the values that we hold dear,” Matthew McCarthy, CEO of Ben and Jerry’s, told Mic in a phone call.

Accordingly, the flavor is intended to celebrate activists opposing the current administration’s agenda, including those organizations working on issues surrounding climate change, immigration and the equitable rights of women and black people, among others.

In a press release, Ben and Jerry’s said the company plans to donate $25,000 to each organization and continue to put a spotlight on the groups through its social media channels.

For those wondering what an anti-Trump ice cream tastes like, the flavor is an updated interpretation of New York Super Fudge Chunk, filled with pecans, McCarthy said.

In the current political climate, restaurants and brands walk a fine line in avoiding the pitfalls associated with making partisan statements, but McCarthy said that wasn’t of concern for the company.

“I don’t think any business should kid itself into being a business of being all things to all people,” McCarthy said. “We’re an ice cream company. We don’t try to take ourselves too seriously. We do take our values and the things we support very seriously, and there will be some people that don’t agree with our point of view. Listen, that’s part of a healthy democracy and we don’t have any problem with that whatsoever.”

“I don’t think any business should kid itself into being a business of being all things to all people.”

McCarthy said the brand anticipates disapproval from critics. “We always get negative reactions,” he said. “The reality is when we step into an issue, it’s usually one there’s a difference of opinion on. And we step out because we believe people and businesses need to have a voice — our fans expect that of our business. “

McCarthy said Pecan Resist is currently available online and is planned for a staged roll-out through select brick-and-mortar stores over the coming weeks.