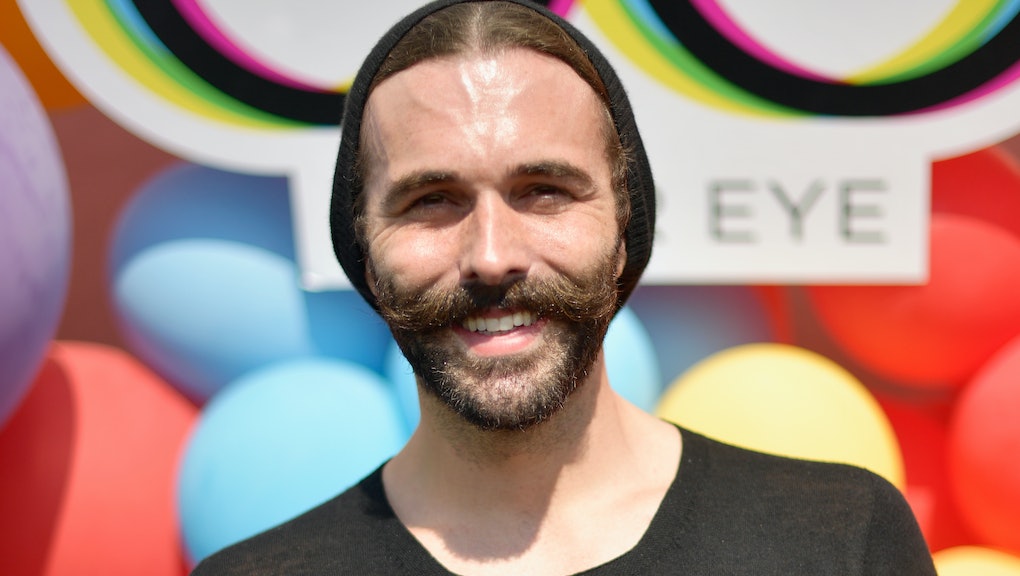 Van Ness is currently gearing up for the show’s third season — the premiere date for which is unknown at this point — but in the off-season, he gets his wellness on via meditation, yoga and non-caffeinated tea. (He loves chamomile, lavender and cinnamon.)

Below, read Mic’s 10-minute chat with Van Ness from a big yellow couch in the middle of the Oculus transportation hub beneath New York City’s One World Trade Center.

Mic: Wellness is obviously a very important topic for you — as a case in point, this campaign — but it’s no secret we’re living in a very unwell world. How do you reconcile this?

Jonathan Van Ness: Well, I think wellness is a very multifaceted subject and there’s a lot of ways to approach it. It’s more multifaceted than that L’Oréal commercial with Beyoncé that one time. Remember? She’s so multifaceted. One thing that I do is a lot of yoga. I also do a daily morning routine before I read the news and before I look at anything on my phone. I roll out of bed and sit up on the floor really straight, and I close my eyes and listen to the sound of my breath for three minutes.

And I think the thing with that is the science of it all says it’s really more important to do a shorter time daily when it comes to a wellness routine than being like, “Oh, my God, I’ve never done wellness before, let me sign up for a three-hour meditation class and then a two-hour yoga class and then go to work by 7 a.m.”

I think sometimes, when we approach the idea of wellness, we think we need to do the most [when] really it can be little tidbits. Lipton is what’s been helping me come down, too. No joke. It’s what I’ve been switching to after my coffee after 1 o’clock, so I’m not up until 11 o’clock reading Reuters like, “Nooooo!”

I think we can all agree smartphones do nothing to bolster our wellness. But it’s easier to recognize this than to actually adopt habits that involve putting our phones away. Any tips?

JVN: Don’t ask. I’m not the expert for that. I need to Queer Eye my relationship with my phone, I’m the first to admit it. I’m definitely fallible, honey, and I only look like the 18th century’s version of Jesus.

I think I’m having that relationship, too, with my phone. It’s an issue. Maybe I need to increase my meditation time in the morning to seven minutes so I can increase my self-awareness around my relationship to my phone.

JVN: What are you talking about?

I feel like all of a sudden we are seen as some kind of burgeoning phenomenon. What’s it like to reap so much praise — and sometimes scrutiny — just for being your authentic self?

It’s only been nine months?

JVN: It’s only nine months since the first season came out! Having had a relatively difficult childhood and being pretty uncomfortable where I grew up and very bullied for being so many things... I mean, suffering is relative — a lot of people had it a lot worse than I did — but I definitely feel like my first 17 years were incredibly challenging and very heartbreaking for a lot of different reasons. In that time I learned how to create joy for myself, how to experience things and sit in uncomfortable situations, and so because of that I had to get good at dissociating and pretending that I was Kerri Strug competing in the Olympics on my trampoline, or maybe I was serving you Nancy Kerrigan landing a single axel on my kitchen floor.

I had to create moments where I could get out of whatever my circumstance was. So now, whenever I read comments too much or start to think that it’s crazy to have had a lot of the experiences that I’ve had in the last nine months... This was never my goal. I always just wanted to be a hairdresser, and I’ve always just been a passionate person who likes to learn and read and do hair and a lot of stuff. I’m trying to just keep doing that as opposed to investing too much in the scrutiny, even though I’m definitely guilty of reading comments, which is why I need to get off my phone.