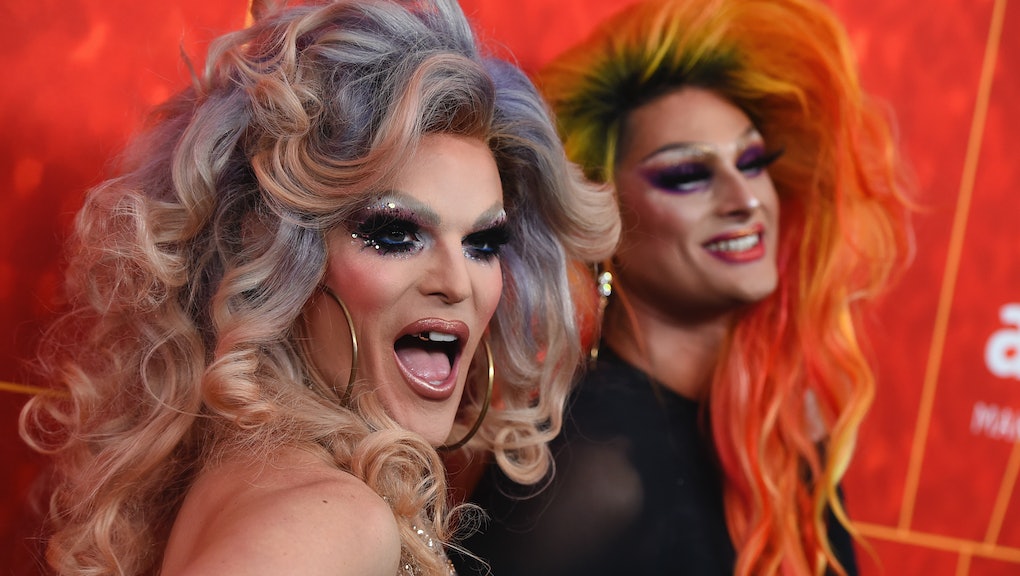 Willam is busy. He’s currently touring Europe after appearing briefly, albeit notably, in A Star Is Born. He’s also got his podcast, Race Chaser, which he co-hosts alongside Alaska Thunderfuck. And then there’s his new album, Now That’s What I Call Drag Music, Vol. 1.

The album does not deviate from the Willam fans know and love, parodying famous bops including Britney Spears’ “...Baby One More Time” and Rihanna’s “Where Have You Been,” as well as classics like Dolly Parton’s “Jolene” and Toni Braxton’s “Un-break My Heart.”

The lyrics are expectedly explicit from the jump. The album opener, “Hoops,” begins with the lyric, “I can fuck you down well.” Track three, featuring fellow Drag Race season four contestant Latrice Royale opens with, “I’ve never been a biter giving head.” And then there’s track five, “Unshart My Fart,” which includes the lyrics you just can’t un-hear: “Undo this stench from my trench that I tried to keep clenched all up in my hole/My flatulency is mixed with wet feces.”

It’s been more than a year since Mic last caught up with Willam, so we took the opportunity to talk about his new album, A Star Is Born and to relive his blink-and-you-miss-it Sex and the City cameo. This interview has been edited and condensed for clarity.

Mic: I love this album. You sound better than ever, particularly on “Hoops.” Voice lessons?

Willam: This nice sea witch I know had a sale I took advantage of and I started smoking more, drinking less than when I recorded the last album — but I don’t think it works like that.

Which of the songs is your favorite and why?

W: “Hoops” because it involves my sex life and jewelry, two of my favorite things.

Can you talk about recording “Oral”? This is a side of Latrice I have long been waiting for in my ears. Any chance of more collabos from you two?

W: Latrice and I already have something else in the works. She is my favorite Drag Race sister to work with, ever since our win on the music challenge of RuPaul’s Drag Race. Also, we’re both smoke-‘em-if-you-got-‘em-indica type of girls.

“Unshart My Fart” has the distinction of being the best titled song. Can you discuss the conception of this instant classic?

W: Shit happens… literally. I just asked the man in my bed if he’s ever sh*t himself and he nodded so I think it’s OK to admit that I have also sh*t myself. It happened in drag. I was trying to fart but when I tuck with actual tape, the fart needs a little extra oomph to get past the tape and I pushed too hard for my skirt’s own good.

Willam! My favorite song on the album is, obviously, “Derrick” for the reference that it evokes. Can you take me back to that now infamous Billboard interview, what you were thinking and did you realize the back and forth between you and Derrick Barry — him saying people died at Stonewall, and you countering that nobody died — would become so iconic?

W: I’ve got this weird kinda head for numbers and dates and slay at teen Jeopardy! so I know the timeline for many of the gay lib milestones. I was glad the topic was brought up but once I saw it being led down a cul-de-sac of misinformation, I decided to help reroute it to the right street. No ill intention was meant by Derrick or I and he is a good sport (as am I) about learning and educating the children about what the LGBTQIA community has accomplished and sacrificed.

I am obsessed with your podcast Race Chaser. Have you heard from any of the season one or two queens with any criticism of your reexamination of the show?

W: Yeah, Tyra [Sanchez] recently went off about letting other queens say stuff about her that she said was untrue, yet all of them agreed happened. It doesn’t matter much to me.

Do you have a dream guest you’d like to have on the show?

W: My dream guest for Race Chaser would be either [early-season recurring Drag Race judge] Billy B. because I miss hanging out with him or any of my friends who’ve been judges like Adam Lambert, or Neil Patrick Harris and David Burtka to get a former judge’s perspective.

What was your reaction to the Into article saying you weren’t getting enough credit for A Star Is Born?

W: I don’t think I could get salty about anything having to do with A Star Is Born, honestly. I didn’t hire a publicist for the movie because I had no idea that my part would end up being as big as it was and honestly I can’t afford PR. I’m glad the work speaks for itself though. It was a magical couple days on set. I was also kinda busy touring and trying to get an album and videos shot to seek out coverage.

If you had to remix one A Star Is Born song for a gay circuit party, which would it be and why?

W: I think all the songs are perfection as is, but I do love “Hair Body Face” and am trying to learn the choreo that Richy Squirrel posted on his Instagram last week.

I have to ask: You recently posted on IG referencing your iconic Sex and the City cameo. Which made me wonder: Are you team SJP or team Kim Cattrall?

W: “Cameo” is a strong word. I was a 17-year-old extra in a piece of fishnet and a thong. I pledge no allegiances to either party, but I respect Kim’s decision as a performer to know when to walk away. People always ask me about All Stars and my new answer is “A Star Is Born is all the stars I need.”