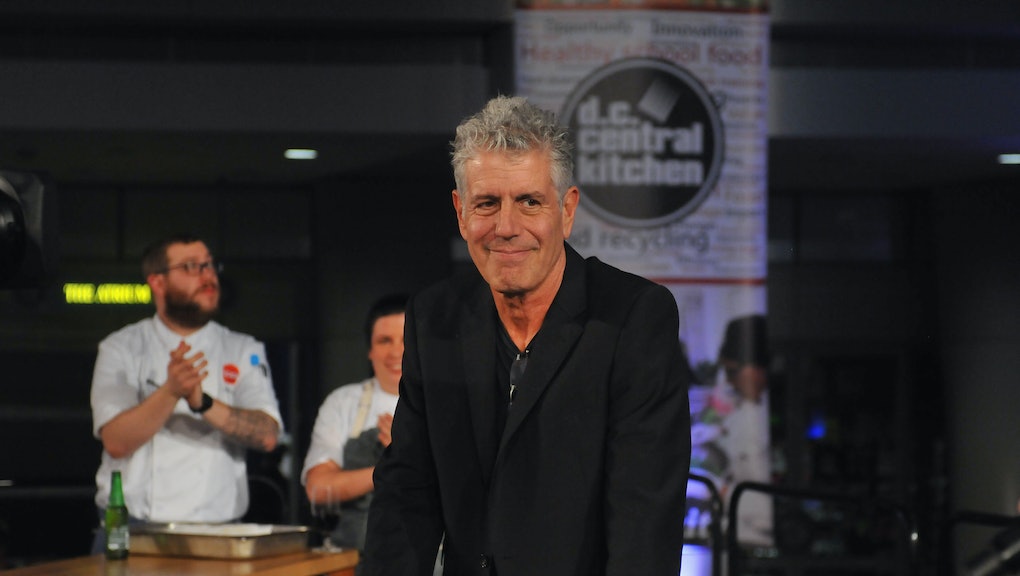 I can’t speak definitively for him, but I’d wager heavily that Anthony Bourdain would not stand for this shit.

As a caravan of migrants, mostly from Central America, seeks asylum in the United States, the Trump administration has denigrated thousands of people who are desperate for safety from persecution they’d otherwise have to endure in their home countries.

“All of us come fleeing from violence and the lack of employment that the current government has for us,” Denis Omar Contreras, a Honduran immigrant and volunteer organizer, said in an interview in Tecun Uman, Guatemala. “We are people who got tired of the current government that we can’t stand anymore. And the best option for mothers, families and us men is to arrive at the border with the United States and ask for political refuge.”

President Donald Trump, instead of once considering how to give refuge to these people in need, has suggested that the caravan is made up of terrorists and criminals. He also inferred that the caravan is a political stunt being orchestrated by Democrats to earn votes in the upcoming midterm elections.

“If you don’t want America to be overrun by masses of illegal immigrants and massive caravans, you better vote Republican,” Trump said at a campaign rally speech from the White House on Nov. 1.

Bourdain, on the other hand, was a staunch advocate for immigrants throughout his career. Of course, he focused a lot on food — it is peoples’ common denominator — but it was just a starting point. Bourdain saw that humanity is shared in all of us. In much of his work, including his CNN TV series Parts Unknown, Bourdain gave a voice to people all over the world, and showed his audience that those we see as strangers are the ones we should be learning from. “If you’re 22, physically fit, hungry to learn and be better, I urge you to travel — as far and as widely as possible,” he wrote in his book Medium Raw. “Sleep on floors if you have to. Find out how other people live and eat and cook. Learn from them — wherever you go.”

At the end of his first book, Kitchen Confidential, which was published in 2000, Bourdain shared a “few nuggets of advice” for anyone wanting to enter the restaurant industry. The first piece of wisdom is “Be fully committed.” The second is “Learn Spanish!”

“I can’t stress this enough,” Bourdain wrote. “Much of the workforce in the industry you are about to enter is Spanish-speaking. The very backbone of the industry, whether you like it or not, is inexpensive Mexican, Dominican, Salvadorian and Ecuadorian labor-most of whom could cook you under the table without breaking a sweat. If you can’t communicate, develop relationships, understand instructions and pass them along, then you are at a tremendous disadvantage.”

Even in his own country, Bourdain strived to understand other perspectives. In the coal mining towns of West Virginia, Bourdain shared the stories of proud Trump-loving gun owners — a group of people who are often considered the antithesis of Bourdain’s values.

“Here, in the heart of every belief system I’ve ever mocked or fought against, I was welcomed with open arms by everyone,” Bourdain narrated in the beginning of the Parts Unknown episode centered on the state. “I found the place both heartbreaking and beautiful, a place that symbolizes and contains everything wrong and everything wonderful and hopeful about America.”

Bourdain was repulsed by the hypocrisy that exists within the current administration over immigration policy. “If Mr. Trump deports 11 million people or whatever he’s talking about right now, every restaurant in America would shut down,” he said in an interview with Pete Dominick on SiriusXM radio.

Even before Trump came into the presidential picture, Bourdain spoke about the painfully duplicitous perspective many Americans hold for Mexican immigrants.

“We love Mexican people — as we sure employ a lot of them,” he wrote in his 2014 essay, “Under the Volcano.” “Despite our ridiculously hypocritical attitudes towards immigration, we demand that Mexicans cook a large percentage of the food we eat, grow the ingredients we need to make that food, clean our houses, mow our lawns, wash our dishes, look after our children.”

In a recent episode of Parts Unknown, which aired after his death, Bourdain traveled to far west Texas, where the Mexican border meets the state. Part of Trump’s wall has already been built here, and border patrol is somewhat pervasive. The episode illustrates how Mexicans and Texans share a symbiotic relationship — and beyond that, a friendship. Over and over again, Bourdain’s show amplified messages of not just tolerance, but wholehearted acceptance. “Loyalty is a big thing in Texas, and you ain’t gonna build a fence between me and my loyal friends,” Ty Mitchell, a Texas bar owner Bourdain interviewed, says in the show.

Bourdain worked endlessly to even the playing field of this world — to share the stories and perspectives of the underdog. We listened.

“He wanted to give a platform to people who would usually be ignored, who would be forgotten,” production manager Nari Kye said in special episode of Parts Unknown that underscored Bourdain’s impact. “People who wouldn’t have a voice otherwise — he truly gave those people an opportunity to shine.”

Without Bourdain to champion the rights of those who need it most — and during a time of serious crisis — who, with an influence like his, will step up to fight for the people who need it most?