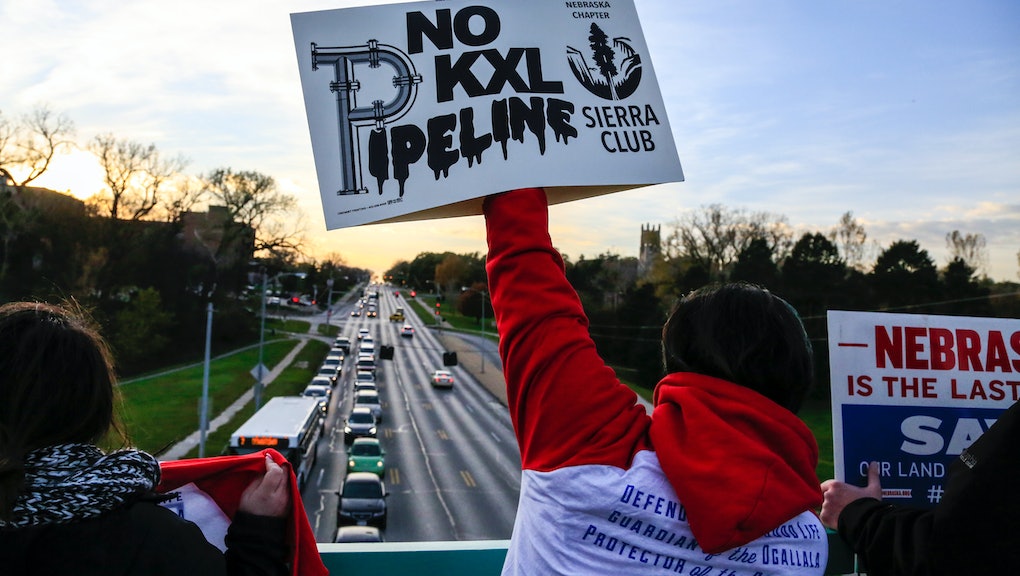 A federal judge blocked the Trump administration’s 2017 approval of the Keystone XL pipeline on Thursday, putting the controversial project’s future in doubt.

The pipeline, which would run 1,200 miles from Canada to Nebraska and carry over 800,000 barrels of oil per day, has drawn controversy since it was first proposed in 2008. Environmentalists and indigenous groups have argued the project would harm endangered species and result in air pollution, greenhouse gas emissions and potential oil spills, including negative environmental impacts on tribal land.

Former President Barack Obama rejected the pipeline in 2015 as a result, saying the project “would not serve the national interests of the United States,” but President Donald Trump reversed that decision in January 2017.

In its ruling Thursday, however, the U.S. District Court for the District of Montana found that in its reversal of the Obama-era decision, the Trump administration’s U.S. Department of State had violated the National Environmental Policy Act and the Administrative Procedure Act.

“The Department instead simply discarded prior factual findings related to climate change to support its course reversal,” Morris wrote.

The court also found the Trump administration’s decision failed to take significant changes since 2014 into account, such as changes to oil prices and major oil spills that occurred between 2014 and 2017. It also did not properly consider the cumulative greenhouse gas emissions and climate impacts from both the Keystone XL pipeline and a related Alberta Clipper expansion project.

Though the court ruled the Trump administration did not violate the Endangered Species Act as the environmental and indigenous organizations behind the lawsuit had claimed, the court did call on the administration to update reports on potential impacts to endangered species in light of the updated information on oil spills and leaks.

Becky Mitchell, chairwoman of the Northern Plains Resource Council, a plaintiff in the case, noted in a statement celebrating the ruling that the decision was “as good a ruling as we could have hoped for,” as it “sends TransCanada back to the drawing board” on the pipeline’s construction.

Sierra Club senior attorney Doug Hayes told the Washington Post that construction on the pipeline was slated to begin in early 2019, though an environmental report as the court is requiring would likely take a year to complete. The Trump administration or TransCanada could still appeal the court’s ruling to the Court of Appeals for the Ninth Circuit.

“It’s clear that this decision tonight will delay the pipeline significantly,” Hayes told the Post. “TransCanada does not have an approved pipeline at this point.”

Environmental groups heralded Thursday’s ruling as a victory against the Trump administration, which has repeatedly moved to weaken climate and environmental policies. Jared Margolis, senior attorney with the Center for Biological Diversity, described the decision as a “complete repudiation of the Trump administration’s attempts to evade environmental laws and prioritize oil company profits over clean water and wildlife,” while Friends of the Earth legal director Marcie Keever hailed the ruling in a statement as “a decisive moment in our fight against the corporate polluters who have rushed to destroy our planet.”

“Environmental laws exist to protect people and our lands and waters,” Keever said. “Today, the courts showed the Trump administration and their corporate polluter friends that they cannot bully rural landowners, farmers, environmentalists and Native communities.”