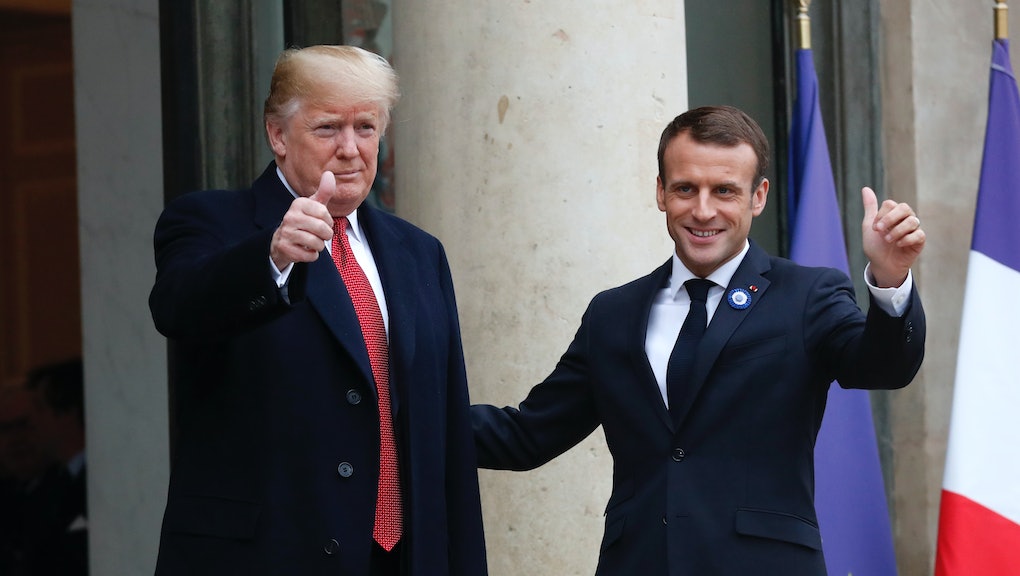 President Donald Trump spent the weekend in France to mark the centennial of the end of World War I, where his actions and policies have already come under fire from leaders both around the world and at home.

World leaders gathered Sunday in Paris for a ceremony marking the end of the war on Nov. 11, 1918. The day’s events paid tribute to the fallen soldiers of World War I and marked a show of unity between France and Germany 100 years on from the conflict, as French President Emmanuel Macron and German Chancellor Angela Merkel held hands and united at the spot where the peace charter was signed.

Even as he showed unity with his European allies, however, Macron rebuked Trump’s own “America first” positioning and recent statements describing himself as a “nationalist.” In an apparent criticism of Trump, Macron took aim at that term while speaking during a ceremony at the Arc de Triomphe, describing patriotism as “the exact opposite of nationalism.”

“Nationalism is a betrayal of patriotism,” Macron said Sunday, as quoted by NBC News. “By saying, ‘Our interests first, who cares about the others,’ we erase what a nation holds dearest, what gives it life, what gives it grace and what is essential: its moral values.”

Macron’s pointed comments came as Trump was already coming under fire from those at home for canceling a planned trip Saturday to the Aisne-Marne American Cemetery and Memorial in France. The cancellation was due to the weather, with Trump saying that the Marine One helicopter could not travel in the rain.

The cancellation, however, drew criticism from those on both sides of the aisle, particularly as other world leaders attended similar events on the same day despite the rain.

“President @realDonaldTrump a no-show because of raindrops?” former Secretary of State John Kerry, who’s also a veteran, tweeted Saturday night. “Those veterans the president didn’t bother to honor fought in the rain, in the mud, in the snow — [and] many died in trenches for the cause of freedom.

“Rain didn’t stop them [and] it shouldn’t have stopped an American president.”

Trump also drew some criticism Sunday for arriving separately to the Arc de Triomphe, as other world leaders arrived together and walked side by side to the commemoration ceremony. White House press secretary Sarah Huckabee Sanders said Trump’s separate arrival was “due to security protocols.”

There was one security breach as Trump arrived at the Arc de Triomphe, as a protester from feminist activist group Femen disrupted Trump’s motorcade by walking amid the motorcade shouting, “fake peacemaker.”

After the Arc de Triomphe commemoration, which Trump praised on Twitter as a “beautiful ceremony,” he made an appearance at the Suresnes American Cemetery before traveling back to the United States. Trump delivered a speech at the ceremony in honor of the WWI centennial and paid tribute to those who died in the war.

One thing that Trump did not do Sunday, however, was meet with Russian President Vladimir Putin. Though the two had been expected to meet at the Paris gathering, the Associated Press reported Sunday the meeting would not take place. Putin told a Russian news network that he and Trump had decided “not to interrupt the schedule” of WWI events with their meeting, and the two are still expected to meet during the G20 summit in Buenos Aires later this month.

Though they didn’t have an official meeting, the two did greet each other at the Arc de Triomphe ceremony. After brief handshakes with Macron and Merkel, Putin and Trump greeted each other with friendlier pats on the back, as Putin flashed a “thumbs up” sign to the Trump. The friendly greeting comes as Trump previously came under fire for his willingness to side with the Russian president after they held a summit in Helsinki in July.