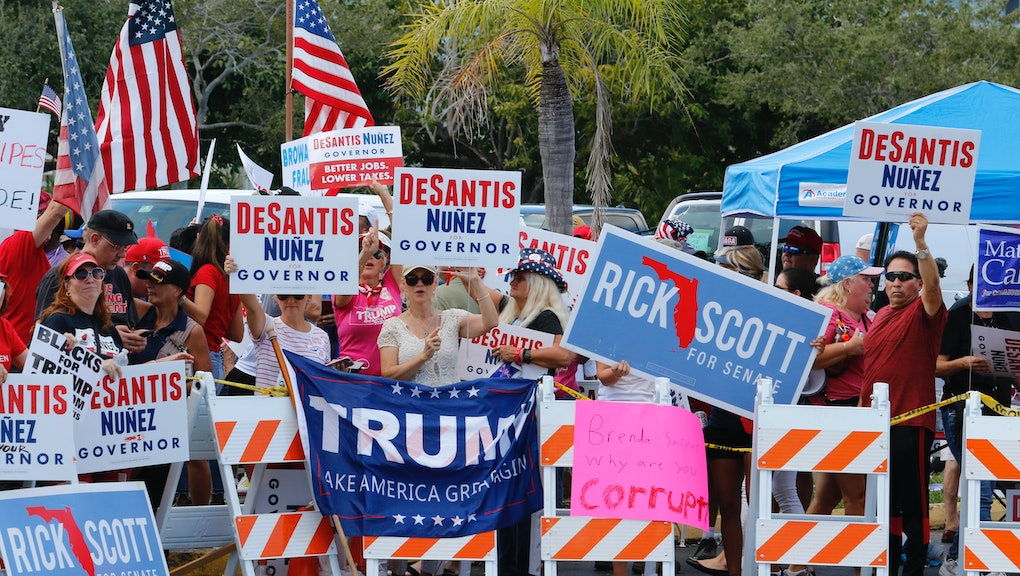 The November midterm elections will continue playing out this week nearly a week after voters went to the polls, as votes still continue to be counted in several high-stakes races.

The Florida Senate and gubernatorial elections are still in full swing as contentious recounts begin to determine the races’ ultimate winners, while initial final election results still remain uncertain in races across the country.

Current lawmakers will make their way back to Washington, D.C., this week, as Congress resumes its session after a recess for the election. Vice President Mike Pence will leave Washington for an international trip to Japan, Singapore and other ally nations, while Trump will return from Europe and give Medals of Freedom to several key individuals — including the wife of one of his major donors.

Midterm elections: Counting is still ongoing in the midterm elections after Tuesday’s vote; among the races still yet to be officially called are key House races in New York, New Jersey and Texas, as well as the Arizona Senate race, where Democratic candidate Kyrsten Sinema is pulling into the lead. The fight also still isn’t over in the Georgia governor’s race between now-resigned Georgia Secretary of State Brian Kemp and Stacey Abrams. Kemp leads 50.3% lead, but the race could head to a runoff election if his lead dips below 50%.

The primary political drama will be playing out in Florida, where recounts in the state’s Senate and gubernatorial races have become partisan political controversies. Republicans, including President Donald Trump, have questioned the count’s legality, despite officials in Florida reporting there is no evidence that any voter fraud has taken place. Sen. Bill Nelson (D-Fla.) meanwhile, has sued Florida’s secretary of state over the state’s signature matching policies to ensure more provisional ballots can be counted.

The fraught political battle is expected to continue throughout the week, with final recounts due from each Florida county by 3 p.m. Thursday.

Trump’s agenda: Trump will be back in the United States this week after spending a contentious weekend in Paris to commemorate the centennial of World War I coming to an end. On Tuesday, he will mark Diwali with a ceremonial lighting in the Oval Office.

On Friday, Trump will award the Medal of Freedom to seven individuals, including Sen. Orrin Hatch (R-Utah) and posthumous medals to Elvis Presley, Babe Ruth and Supreme Court Justice Antonin Scalia. Trump’s choices, however, have come under scrutiny, as he will also be honoring Miriam Adelson, the wife of major Republican donor Sheldon Adelson. Adelson donated over $82 million to Republicans in 2016, including over $20 million to Trump’s campaign specifically and a $5 million donation to Trump’s inaugural fund.

Congress: The House and Senate will head back to Washington this week, where they’ll begin their lame duck session before the next Congress begins in January. The fate of Robert Mueller’s investigation will likely be a focus of lawmakers’ week, as the recent resignation of Attorney General Jeff Sessions and ascension of Matthew Whitaker as acting attorney general has thrown the probe into doubt.

Politicians on both sides of the aisle have pushed for a vote on legislation protecting Mueller in the wake of the staff shakeup, and Sens. Jeff Flake (R-Ariz.) and Chris Coons (D-Del.) are reportedly planning to demand a vote on the legislation on the Senate floor this week. Whether that vote will come to fruition seems unlikely, however, as Senate Majority Leader Mitch McConnell (R-Ky.) said Friday he still believes the legislation is “unnecessary.”

Negotiations will also be taking place this week to reconcile Congress’ pending farm bill, which includes potential changes to federal food stamps that could affect millions of Americans who currently receive benefits through the program.

Mike Pence: The vice president embarked on an international trip Sunday to Japan, Singapore, Australia and Papua New Guinea. Pence will represent the Trump administration at the the U.S.-ASEAN Summit and the East Asia Summit in Singapore and at the Asia Pacific Economic Cooperation meetings in Papua New Guinea.

During his travels, Pence will meet with multiple world leaders, including Prime Ministers Shinzo Abe of Japan, Lee Hsien Loong of Singapore, Narendra Modi of India, Peter O’Neill of Papua New Guinea and Scott Morrison of Australia. The Japanese government said Pence’s meeting with Abe will be an “ideal opportunity” for the two governments to reaffirm their cooperation on key regional issues, including North Korea.