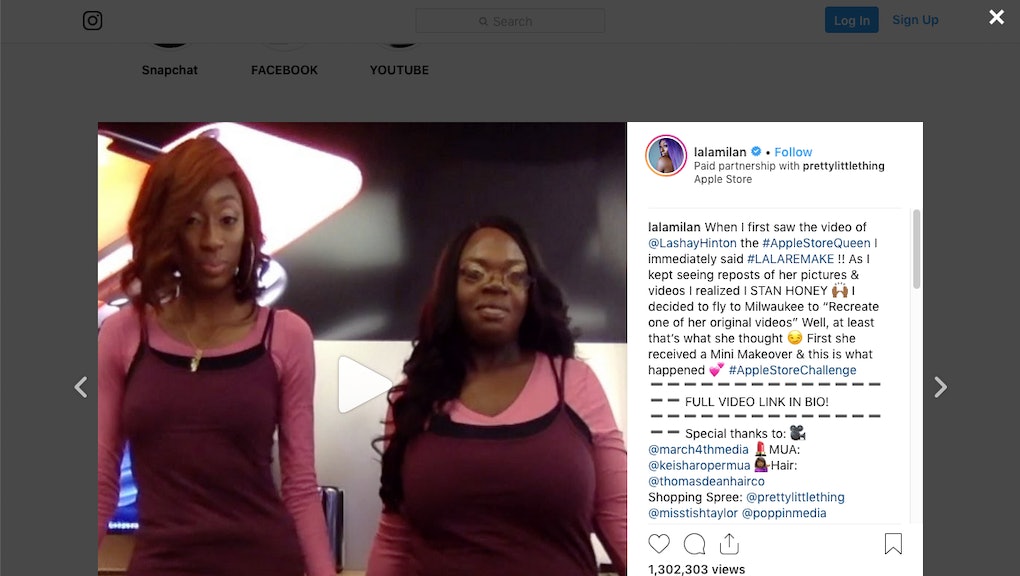 #AppleStoreChallenge videos have been taking over Instagram and probably an Apple Store near you. Now a prominent fan has shown their appreciation to the one who created the trend.

The original Apple Store Challenge video was created by Instagram user Lashay Hinton, aka the Apple Store Queen. In her video, we see Hinton at an Apple retail store dancing in front of one of the computers’ webcams to Pretty Ricky’s “Love Like Honey.” The video is simple yet infectious.

Since Hinton posted the video on her Instagram Friday, the footage has gone viral. With the hashtag #AppleStoreChallenge, numerous others on Instagram have visited their local Apple Store to show off their smooth moves and superior fashion sense.

Some #AppleStoreChallenge dancers have brought the trend into their homes.

Other dancers are showing up the competition by adopting pro-level filming techniques.

When a video challenge goes viral, there’s only one thing more satisfying than daily love advice from Pretty Ricky: people showing love to the meme’s creator. In 2016, Ellen Degeneres gave the “Damn Daniel” kids a lifetime supply of white Vans. In July, Drake put Shiggy Simmons in the “In My Feelings” video after his moves went viral. Now, Hinton has claimed her prize: a free MacBook and shopping spree, courtesy of comedian La La Milan.

As a surprise to Hinton, Milan had an Apple retail store associate reveal the good news. Milan even kept the trend going by doing her own #AppleStoreChallenge video for her 2 million followers. A gift like that is sweeter than honey.