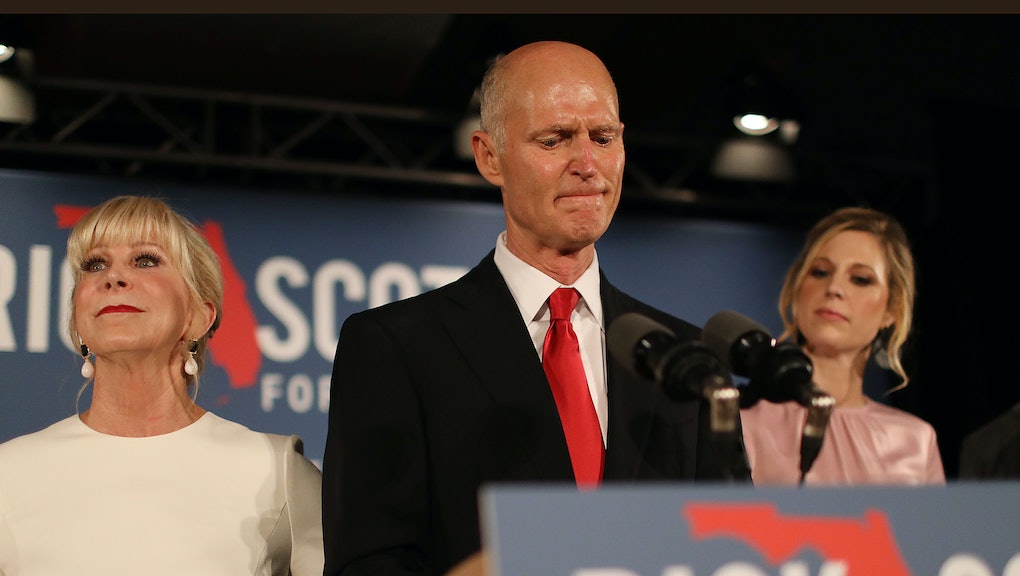 The only thing in Florida more ubiquitous than election recounts might be the lawsuits that have sprouted up in the interest of keeping them fair.

Amid recount proceedings that are currently underway in both the Sunshine State’s gubernatorial and senate races, two groups filed suit against outgoing governor and Republican senate candidate Rick Scott on Monday over his role in overseeing the vote tallies.

The complaint, filed by the League of Women Voters and Common Cause Florida, requests that a judge issue a temporary restraining order to bar Scott from participating in the recount efforts, and claims that he has already “used the official powers of his office to interfere in the election to benefit himself and his political party and to intimidate the local officials and volunteers conducting the vote count.”

In the wake of the news that the Florida senate race was too close to call, Scott has joined a growing chorus of Republican voices, including President Donald Trump, in questioning the legitimacy of the election results, and has even gone so far as to mobilize state law enforcement in the interest of investigating the recount.

Previously, the president tweeted that “an honest vote count is no longer possible” in Florida due to his unverified claim that ballots had been “massively infected.”

“The Florida Election should be called in favor of Rick Scott and Ron DeSantis in that large numbers of new ballots showed up out of nowhere, and many ballots are missing or forged,” Trump said, referring to the Republican gubernatorial candidate currently facing off against Democrat Andrew Gillum.

On Monday, a judge rejected Scott’s request for seizure of voting machines and ballots in hotly contested Broward County, arguing that there was zero evidence that any voter fraud had occurred.

“No man should be a judge in his own cause,” the League of Women Voters and Common Cause Florida said in the new lawsuit, which was filed in U.S. District Court on Monday.

The suit comes on the heels of several other complaints that have cropped up in the wake of the recount efforts, including one filed on behalf of VoteVets, the Democratic National Committee and the Democratic Senatorial Campaign Committee requesting at all mail-in ballots postmarked by last Tuesday be counted under the final vote totals, according to the Washington Post.

But the litigation being levied is nothing compared to the war of words the candidates themselves are currently engaged in. On Monday, Nelson himself called upon Scott to recuse himself from the recount proceedings, saying that the Republican has “thrown around words like ‘voter fraud’ without any proof.”

During a televised interview with Fox News earlier in the day, Scott had once again echoed the president’s divisive rhetoric, calling Nelson a “sore loser.”

The Florida senate race is likely headed to a manual recount — the first in the state’s history — during which lawyers would be present in each of the 67 counties to supervise the recount process.