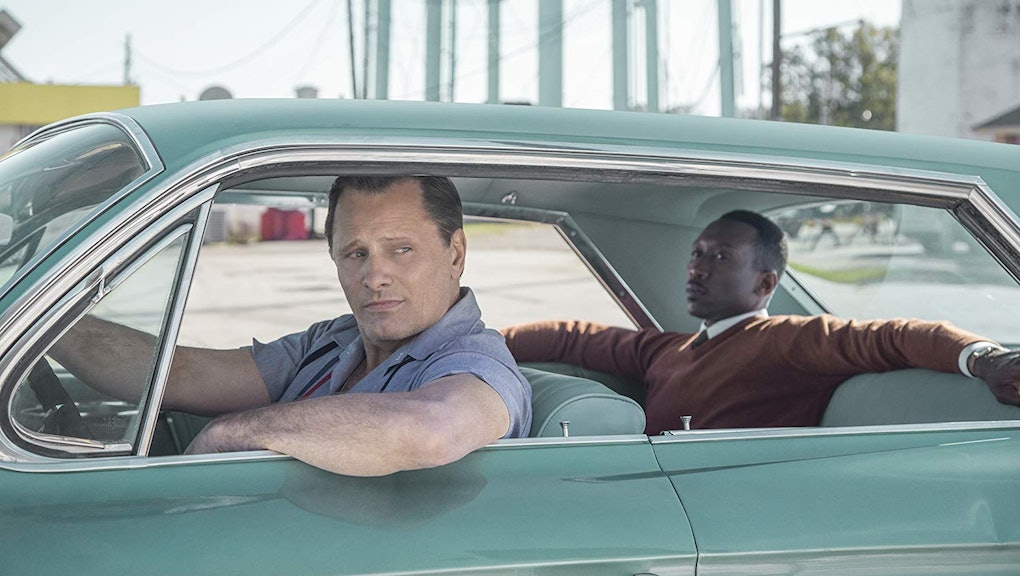 If you’ve seen any advertisements or trailers for Green Book, odds are you’re pretty familiar with the bits being pushed by the movie’s marketing team. The new film from director Peter Farrelly — yes, of the Farrelly brothers; yes, those Farrelly brothers — is an uplifting buddy picture inspired by a true story: an Italian-American tough guy chauffeurs a Jamaican-American concert pianist through a tour of the Jim Crow South. Probably the most common shorthand (and criticism, depending on who you’re reading) is that it’s a twist on Driving Miss Daisy, an old story in a new Cadillac.

So we have a teachable road trip in which two men from very different backgrounds learn to understand and open their hearts to each other. As such, the commercials and promos play up a handful of too-cute gags: There’s the one where the driver, Tony Vallelonga (played by Viggo Mortensen), is shocked that his new boss, Dr. Don Shirley (played by Mahershala Ali), has never tried fried chicken before. “You people love the fried chicken,” Vallelonga says in his Bronx accent. After Shirley tells Vallelonga that he’s got “a very narrow assessment” of him, Vallelonga parries back, with a mouthful of Kentucky Fried Chicken, “Yeah, right? I’m good.”

And then there’s the part where, after Vallelonga has gotten Shirley to try a drumstick, the good doctor asks what they do with the bones. “We do this,” Vallelonga says, as he tosses a bone out the window of the car. Shirley smiles and follows suit — they’re sharing a moment of camaraderie. Then Vallelonga spoils the mood by throwing his empty drink container onto the road. Cut to the Cadillac in reverse and voiceover of Shirley sternly instructing, “Pick it up, Tony.”

It all looks achingly wholesome, which it is. This will probably be your mom’s favorite movie of the season. And with its plum Thanksgiving release date — the film opened in select cities on Nov. 16, and goes wide on Nov. 21 — Green Book is sure to win over family audiences, and will likely do well at the box office while it cruises to awards contention.

But despite Universal’s cornball pitch and some very valid concerns about who’s presenting this story about race and how — more on that in a moment — Green Book is an effective movie. Farrelly has been making features for more than 20 years now and, after building a career on diarrhea and the penis fly trap, he’s delivered something more palatable. This film is beautifully lit and features some postcard-worthy shots of America’s countryside. The radio tunes help sell the 1962 setting, and spark some back and forth between Vallelonga and Shirley about Aretha Franklin and Chubby Checker. Mortensen’s Vallelonga carries himself with palpable charisma, and Ali’s Shirley channels a vulnerability and loneliness that draws you in. There’s not much in the way of subtlety, but overall, it’s a story that’s very clearly told and boosted by its two central performances.

Mortensen — who’s currently on a timeout for his inexcusable use of the N-word at a recent event promoting this film about racial harmony — has the lead role here, and he takes to it as enthusiastically as his Tony takes to any food he can get his hands on. (There’s a scene where he’s alone in a hotel room, folding an entire pizza pie as if it’s a single slice and it’s... really something.) When the movie opens, Vallelonga — who’s just fine going by the nickname Tony Lip — is working as a bouncer at the Copacabana, muscling out troublemakers and currying favor with guys who may or may not have mob ties. Renovations shut the nightclub down for two months, which means Vallelonga’s suddenly looking for work just ahead of the holidays.

As played by Mortensen, Vallelonga’s a family man and a proud bullshit artist. He’s dangerously close to a caricature at times — probably the second-most common shorthand involving this movie is that Mortensen’s just doing Sopranos cosplay — but the actor completely commits to and inhabits the part. (Plus, the real-life Tony Vallelonga actually played a recurring character on The Sopranos, so there’s that.) Many of the laughs Mortensen gets are for material that’s fairly broad; still, it works. He’s almost certainly going to land an Oscar nomination for best actor in January.

Even more impressive, though, is Ali’s Don Shirley. He’s a musician living alone, in a lavishly decorated apartment above Carnegie Hall. Tired of playing to Manhattan crowds, Shirley’s looking to tour the midwest and deep south, but he’s in need of a driver and extra protection. True to this two-hander’s formula, he’s carefully mannered where Vallelonga is crass; he’s keen-eyed and well-spoken where Vallelonga’s all about gut instinct. Shirley’s passionate on the piano bench, but composed virtually everywhere else — even when he’s drinking Cutty Sark by himself at night, sitting on the balcony of his hotel room.

Mortensen might be a good bet for a best actor nomination, but Ali feels like the front-runner to win best supporting actor. And if he does so, it’d be for his first major big-screen role since he won that same award for 2016’s Moonlight. He’s that incredible in this part.

Speaking of Shirley’s hotel rooms: Green Book takes its title from The Negro Motorist Green Book, an annual guide that provided black people with tips and information as to where they could travel safely in segregated parts of the country. The guide comes up throughout Green Book — a mention here, a lingering look from the camera there — but it’s hardly a focal point. What this movie is concerned with is the friendship between Vallelonga and Shirley, and it succeeds in showing us how that connection is formed. The chemistry between Ali and Mortensen feels believable and comes naturally, whether they’re collaborating on love letters for Vallelonga’s wife or arguing about how to respond to racist police officers.

But even though their friendship and rapport is the focus, Green Book undeniably prioritizes the perspective of its white character. Both men learn something about the other — Vallelonga recognizes Shirley’s humanity, as well as the prejudice and potential violence he faces every single day; Shirley comes to see past Vallelonga’s working-class signifiers — but this is a story viewed primarily through the eyes of a white man figuring out that racism is wrong. In the beginning of the film, Vallelonga’s bigoted enough to try to throw out some glasses because they were used by two black maintenance men who came to do some work at his apartment. By the end, he’s scolding someone close to him for tossing a slur in Shirley’s direction.

Nick Vallelonga, the son of the real-life Tony, has a writing credit on the script, along with Farrelly and Brian Hayes Currie, so of course the film is going to foreground his father. But the fact remains that Green Book is, as Jezebel’s Cate Young pointed out recently, “another film about race for white people.” It’s also another film about race made by white people, considering the director and writers. The movie’s at its weakest when that basic design flaw is most exposed.

At one point, Shirley attempts to try on a suit in a southern clothing shop, but he’s forbidden from entering the dressing room; he can buy the suit if he’d like, but he can’t try it on. Ali makes you feel the indignity, but it’s such a pat scene. Really, who’s going to side with the racist tailor? I suppose that’s what a movie like this is supposed to do — demonstrate how irrational and inhumane bigotry is — but it feels too easy. That same setup is repeated, too: Shirley tries to partake in a basic service but is denied, while Vallelonga witnesses and then tries to interfere. And, late in the two-hour-and-ten-minute run time, there’s a scene wherein the message basically boils down to #NotAllCops — which, yes, sure, but it can’t help but feel like too calculated of a moment.

The film is just now starting to really draw heat for its politics and perspective. Slate’s Inkoo Kang called Green Book out for making us watch “a white man make his first black friend.” And she’s right — that’s literally the plot. The Houston Press’ Craig D. Lindsey labeled it a “cute racism movie,” and placed it in the lineage of The Help and The Blind Side, two fairly recent best picture nominees that deal with race, but in a way that’s aimed at white audiences. That’s also a fair point; Green Book is definitely a particular type of movie. Vanity Fair’s Richard Lawson delivered a dead-on backhanded compliment, noting that “for the kind of movie it is, it’s nearly perfectly done.” (He also copped to that being a wishy-washy take.)

Those criticisms will only grow in number and volume as the movie opens to more theaters and Oscar punditry really picks up. If Green Book makes it into the best picture race, it will have a long awards season. But so long as people really engage with this film, then the conversation could be valuable. Green Book certainly shouldn’t just be accepted on its own terms, but it also shouldn’t be outright dismissed. There’s a good amount to pick apart here — certainly more than the KFC jokes and hokey commercials would suggest.