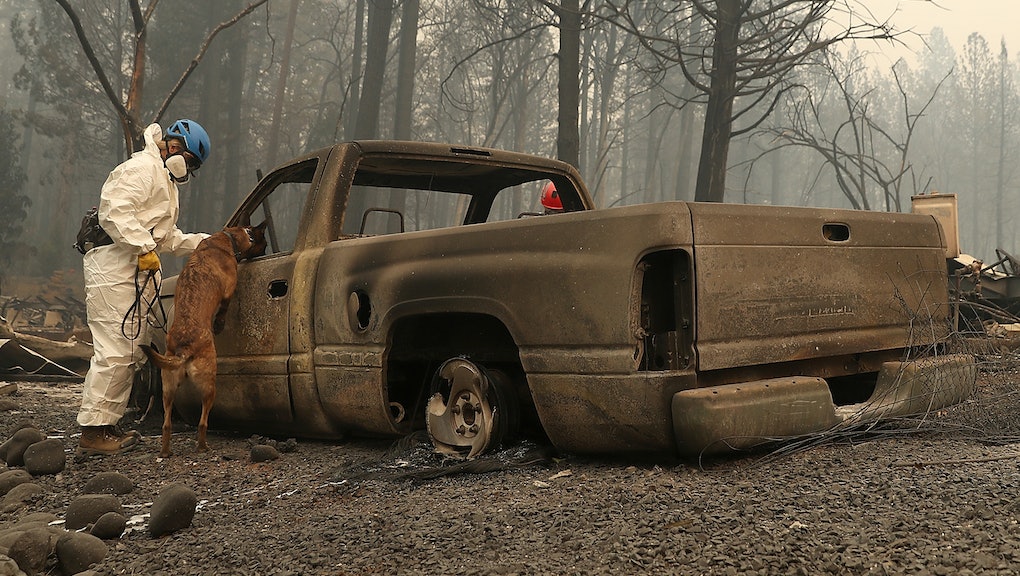 As death toll from the California Camp Fire mounts, residents say officials could have done more

As California continues to grapple with the aftereffects of the deadliest wildfire in its history — including a still-rising death toll that currently rests at 48 and an estimated 7,600 destroyed single-family homes — local residents in hardest-hit communities are laying at least some of the blame at the feet of local officials, who they say could have done more to mitigate the damage.

The Camp Fire began on the morning of November 8, when first responders were dispatched to a brush fire in Butte County, California. But unusually low humidity and high winds quickly caused the blaze to roar out of control, allowing it to snake its way towards the mountain town of Paradise, California, consuming much of what stood in its path.

Christina Taft, whose 67-year-old mother is still missing in the aftermath of the fire, told NBC News that local authorities “definitely didn’t do enough,” in the way of alerting residents to the encroaching danger.

“She didn’t expect it to be that bad,” Taft said of her mother, whom she has had no contact with since Thursday. “She expected someone would be calling, or something, if it got bad. But they didn’t.”

“They were negligent,” she added. “They just let them go. There is a reason all these people are dead.”

Other residents questioned why law enforcement had squandered precious hours in the early stages of the fire when they could have been alerting civilians to an imminent threat.

“We use the emergency broadcast system for a tornado warning,” one unidentified Magalia, California, man told Butte County Sheriff Kory L. Honea at a meeting in Oroville on Monday, according to NBC News. “I don’t remember any alert coming over my radio…. People in the community are freaking out, you need to get some information up here.”

In subsequent press and public briefings, Honea has taken pains to reiterate that the Butte County sheriff’s office did send out alerts warning residents of the rapidly-spreading fire, including more than 5,000 emails, 25,000 phone calls and 5,000 text message notifications.

“I wish we had the opportunity to get more alerts out, more of a warning out, but unfortunately we didn’t,” Honea said during the Monday meeting.

At a separate news event on Tuesday, Honea stressed that the speed at which the fire had spread had also made it difficult for resource-strapped officials to get the word out.

“You have to keep in mind that this was an extraordinarily chaotic and rapidly moving situation,” Honea said. “The fire started in a remote area. It takes awhile for our fire resources to get there and from that point, trying to determine the path of travel and whether or not that’s going to effect populated areas, that takes time.”

But as Paradise resident Savannah Rauscher told the Sacramento Bee, the flames were already licking the edges of her family’s property by the time she got her first telephone alert.

“We saw a wall of fire,” she told the Bee. “Trees were glowing 50 yards away and it was probably moving like 10 yards every couple minutes.... I had no idea it could be that fast.”

Rauscher added that as they escaped by car moments later, she and her husband were forced to swerve into the oncoming traffic lane in order to free themselves from an unmoving line of cars fleeing Paradise. As she motioned to other cars packed with civilians, encouraging them to do the same, she said her husband told her, “We’re not going to die like this.”