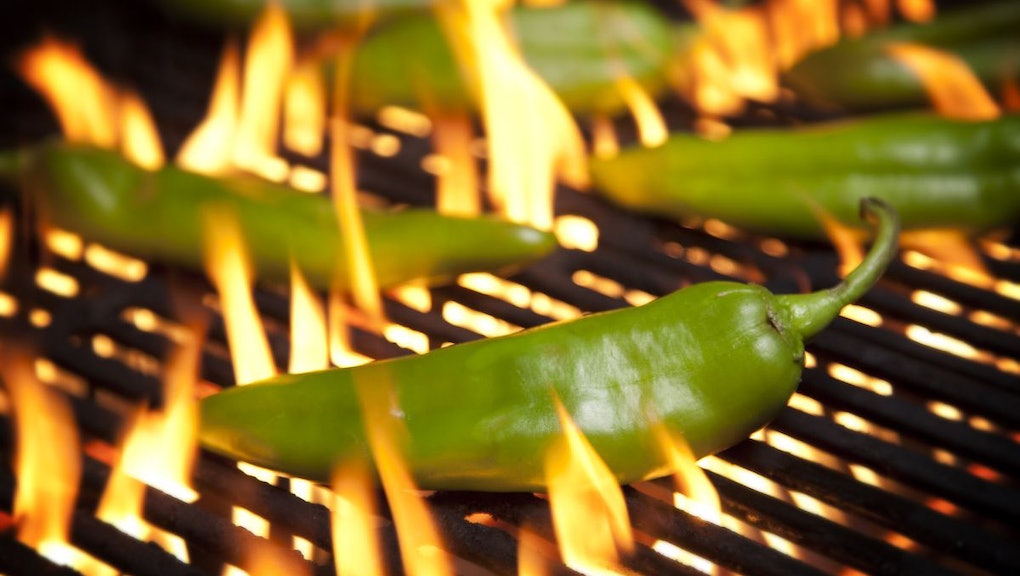 The spicy, precious Hatch chile is coveted around the world — but its future is in jeopardy

New Mexico’s Hatch chiles play a starring role in the huevos rancheros and breakfast burrito served during Sunday brunch at Superfine in Brooklyn, New York. Two of Superfine’s three co-owners once lived in New Mexico, and such is their loyalty to the Hatch chile’s uniquely satisfying spicy umami that they’ve arranged to have the red and green flame-roasted peppers flown in to LaGuardia Airport every month by cargo jet.

“When we moved to New York, we would joke about opening a restaurant just to import Hatch chiles — and so we did,” Superfine’s Tanya Rynd said in an email. “It’s a tremendous commitment on our part, but how would we live without our hit of Hatch?”

It turns out Hatch chiles, named for the Hatch Valley of New Mexico, are a highly crave-able commodity. “People who move from New Mexico always have to come back to get some,” Stephanie Walker, an extension vegetable specialist at New Mexico State University, said over the phone. “My brother moved to California; he only visits to raid my freezer once a year and take all the chile that I’ve put up!”

“You’ll sweat a little; your nose will run a little — and that’s when you know it’s just right.”

Hatch chiles encompass a number of varieties, including Anaheim, charger, No. nine and No. 1904 — which is also the most widely used variety in the state of New Mexico. Yet they don’t all have the same heat level or flavor profile, even if they happen to be Hatches of the same variety. “It’s hard to fix a standard heat level on the different varieties Hatch, because when chile peppers can make capsaicin, environmental conditions — wind, bright sunlight, drought, soil salinity — will dramatically affect their flavor and heat,” Walker said. “But it’s these stresses that bring out the flavors, because it causes the plants to produce phytochemicals in response. I hear stories about people who try to grow New Mexico chiles in other parts of the country, and they just don’t get the flavor or heat development that we get when we grow it here.”

It’s a metaphor for life, really: Like people, Hatch chiles that go through hard times develop a depth of quality that is highly valuable. “Once you get hooked on it, you eat it every meal, three meals a day,” Walker said. “You eat it with cheeseburgers. Omelets. Scrambled eggs. Enchiladas. Hot dogs. Stew. I have pizza heating for dinner right now that has Hatch chiles on it.”

Fifth-generation New Mexico chile farmer Preston Mitchell said he doesn’t eat meals without Hatch chiles. “In restaurants, you can add a side of Hatch chile to any dish, or have it smothered,” Mitchell, who owns The Hatch Chile Store, said over the phone. “Burgers, mac and cheese, steaks, anything with pasta, anything with a white sauce, anything with a red sauce. The Hatch flavor is a complex, slow burn with a nice hint of smoke. You’ll sweat a little; your nose will run a little — and that’s when you know it’s just right.”

Unfortunately for spice lovers, however, it appears that Hatches — and other New Mexico chiles — may be becoming more rare. Hatch production has fallen slightly — from 69,600 tons in 2016 to 62,700 tons in 2017 — due to a combination of factors, including drought, tougher immigration laws and the temptation for growers to switch to a less demanding, more profitable crop.

“Chiles have to be planted each year, and then you have to figure out your crop rotation to keep the land productive,” Walker said. “Year to year, more [New Mexico chile] acreage is going into pecans. They are the competing crop, because, in a lot of ways, it’s just easier to have an orchard.”

Mitchell agreed. “Chile is a finicky crop,” he said. “It’s susceptible to a lot of different diseases, to intense heat, to too much rain or too little rain. For a long time now, we’ve seen a decline in our watershed. That’s put a lot of pressure on farms in the area, because they’ve had to pump virtually all of their water.”

Tougher immigration laws have threatened production of the piquant pepper, because it’s still a crop that must be harvested by hand. “In my grandparents’ time, there was very little difficulty getting across [the border] and working in the U.S. if you were Mexican,” said Mitchell. “The same three families would come and work for us every year. I don’t know if it’s because of increased border security or what, but there’s not a lot of younger labor coming in from Mexico now.”

As a result, he said, many Hatch growers have resorted to hiring laborers via the government’s H-2A program, which, Mitchell said, requires them to house crews of up to 60 and transport them to and from the Mexican border. “If you’re a big grower who needs 200 people in the field at a time, picking chile six days a week for three months, it gets very expensive,” said Mitchell, who is also a Hatch wholesaler. “It drives the price of Hatch chiles way up.”

To help combat low Hatch production levels, Walker has been focusing on improving plant architecture to boost yields. “I’ve developed chile varieties that are more efficient for the pick, so we get fewer broken fruit — and a larger harvest,” she said. “I’ve also reduced field loss by breeding plants with more efficient architecture: a longer, strong single stem that gets the fruit up off the ground, with no lower lateral branches.”

For his part, Mitchell is boosting Hatch harvests by leading the charge to create traceability for the peppers, as Vidalia, Georgia, did with its onions and Napa Valley, California, did with its wines. He represents a group of growers — the Hatch Chile Association — that has applied for a certification mark to protect the Hatch brand. “Our certification mark is for fresh, pod-type long green chile grown in the Hatch Valley of southern New Mexico, which extends for about 14 miles around the village of Hatch,” he said. “So if you see fresh chile on a shelf and above it it says ‘Hatch’ and below it it says ‘product of Mexico,’ or ‘product of Arizona,’ or if it was grown in New Mexico but 75 miles away from Hatch — that’s what we’re looking to combat.”

The procedure seems to be working. “The Hatch chile crop has been increasing ever since we formed the association, applied for the certification mark and started finding counterfeit chile being sold from Mexico or from other parts of our state,” Mitchell said. “We’re seeing people shift from selling quote-unquote Hatch to actually selling Hatch. And we’re seeing demand pick up, little by little. The Hatch deal is actually growing, in spite of the overall decline of the entire New Mexico chile industry.”

Meanwhile, Mitchell literally eats and sleeps his beloved Hatch chile. “It’s in my dreams!” he said. “When you’re in the middle of a three-month growing season of 16-hour days, and chile is all you’re watching going across the line, and all you’re doing is yelling at people about chile, and trying to find chile, and trying to sell chile, well — it’s like anything that consumes you.” And he, in turn, consumes it right back.