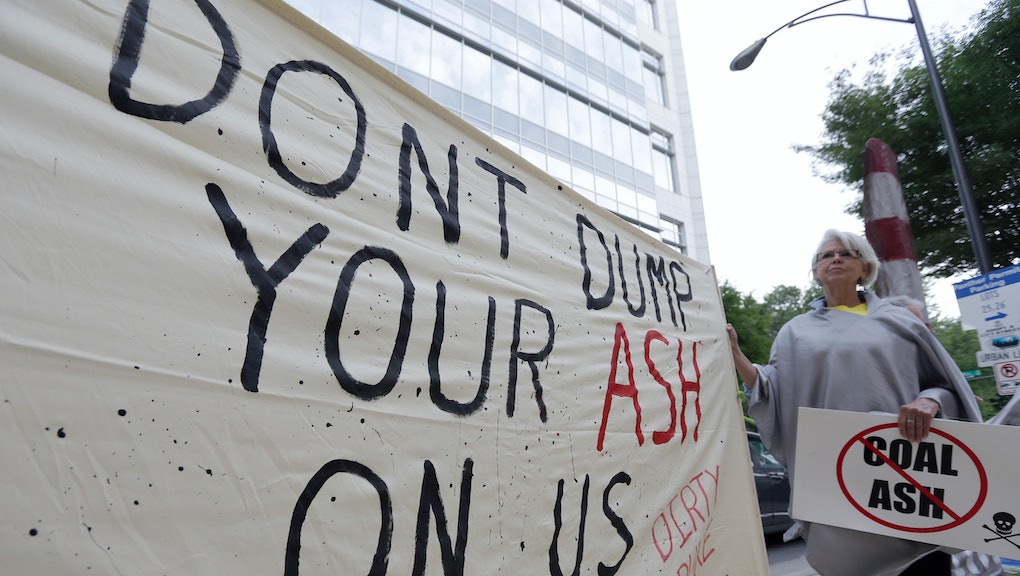 President Donald Trump has long made protecting the coal industry a key part of his platform. But for Americans affected by coal ash, keeping coal alive is coming at a hefty price.

Coal ash is the toxic waste produced from burning coal in power plants, according to nonprofit environmental organization Earthjustice. The toxin is widespread throughout the U.S.; the American Coal Ash Association found nearly 130 million tons of coal ash was generated in 2014, and the Sierra Club reported coal ash waste is stored at more than 1,400 sites in 45 states.

The heavy metals found in coal ash are found to have a range of negative health consequences. According to Physicians for Social Responsibility, the toxins could result in such conditions as cancer, nervous system disorders, heart damage, lung disease, respiratory distress, kidney disease, reproductive problems, gastrointestinal illness, birth defects and impaired bone growth in children.

One of the places where these consequences are being felt is North Carolina, where recent coal ash spills during Hurricane Florence put the spotlight back on the toxic waste and its negative effects. Upper Neuse riverkeeper Matthew Starr said in an interview that his team had found “multiple points” where coal ash had been spilled into the Neuse River after Hurricane Florence — though he noted the problem of coal ash is even more widespread.

Residents throughout North Carolina have felt the effects of the coal ash problem; Leslie Bray Brewer, a pastor in Walnut Creek, North Carolina, has even held a healing service devoted to those affected by coal ash.

“I have five children and the older four children were primarily raised over near the Blues Creek Steam Station with the coal ash, and they all had severe breathing issues and I was puzzled,” Brewer said. “I felt guilty. As a mother I thought, ‘What am I doing wrong? Is my house not clean enough?’ because asthma wasn’t in my family.”

Youth pastor Elijah Evans described feeling the effects of the coal ash as a child, recalling in an interview how “my lungs and my throat would be swelling and closing up.”

“I remember one night in particular that stands out,” Evans said. “If I had to guess, I was maybe 4 or 5 years old, and my mom had to rock me in the rocking chair in our living room. At that point, I was little but I remember thinking, like, ‘Am I going to die?’”

Susan Wind, a resident of the wealthy town of Lake Norman, North Carolina, became an activist against coal ash when her 16-year-old daughter was diagnosed with thyroid cancer.

“[Lake Norman is] probably one of the wealthiest zip codes in the state,” Wind said in an interview. “And again, like as a mom, the things we all look for [is] ... a safe environment. I’ll look up to see if there’s registered sex offenders in an area. I look up to see the ratings of the school systems. Never did I look at the environment as far as coal ash, because I think if I knew all this, I probably never would have moved here.”

Wind’s activism led the state to open up an investigation into a cancer cluster in the area. That cluster includes the Trump National Golf Club in Charlotte, North Carolina, and Wind noted many of the area’s residents support the president whose policies could heighten coal ash’s harmful effects.

“The majority of the people here, I would say, support Donald Trump,” Wind said. “A lot of people do. And they’re like, ‘Well, Donald Trump would care,’ and they tell me, ‘Call Donald Trump.’ ‘Call Eric Trump’; ‘Eric Trump comes to the club and has lunch with people and he raises money.’”

“And I’m like, ‘Do you know they rolled back all the EPA regulations when it came to coal ash monitoring?’ And they’re like, ‘What do you mean?’” Wind continued.

Despite the negative health effects from coal ash, however, it remains difficult to prove a clear link between health problems in a particular area and pollution. Coal ash producer Duke Energy also maintains that its activities aren’t harmful, despite pleading guilty to criminal violations of the Clean Water Act after a previous coal ash spill in 2014.

“[Coal ash is] not toxic and let me explain why,” Erin Culbert, communications manager at Duke Energy, said in an interview. “If I drank a lot of water or I take too many ibuprofen, that can be dangerous for me, but a small amount is just fine. In fact, a small amount of some minerals is in our vitamins every day.”

In a fact sheet published by Duke Energy, the company backed up its claims about coal ash, noting, “The Environmental Protection Agency has evaluated coal ash extensively and has repeatedly determined that it is not a hazardous waste.” According to Electric Power Research Institute data cited by Duke Energy, less than 1% of coal ash “consists of trace elements that can pose a risk to human health in high quantities.”

Culbert acknowledged that coal ash is in the groundwater at the Duke Energy plant, but noted, “The groundwater directly underneath the [coal ash] basins is affected and that’s because these basins are unlined.”

“But it’s important to note that is on plant property,” Culbert said. “And for all intents and purposes the water from under the ash basins is flowing away from neighbor’s wells.”

In a subsequent email comment to Mic, Duke Energy emphasized it is “committed to closing all of our ash basins and continuing to monitor the groundwater around the basins for years after closure, even if regulations change.” It said the closures and “any corrective steps needed will resolve groundwater issues.” Private well tests cited by the company have not found evidence of coal ash impacts, and the company said its plants “comply with very strict emissions standards designed to protect the health of our neighbors.”

Despite Duke Energy’s claims, however, Duke University geochemistry and water quality professor Avner Vengosh said there is cause for concern, saying it is “really not serious to say coal ash is not posing risks to human health.”

“[We’re] showing that shallow groundwater underlying coal ash ponds are being contaminated all across the country,” Vengosh said.

The professor, who studies the effects of coal ash on the environment, noted the issue is worrying even for those whose water hasn’t yet been contaminated by coal ash.

“People who are living next to a pond ... are living with uncertainty; maybe they will be affected in the future,” Vengosh said.

“You have a family, you have children — will you allow them to continue to use the water as drinking water?” Vengosh added. “That’s kind of a question many of the residents in North Carolina are asking themselves [on] a daily basis.”

Check out this episode of Mic Dispatch — only on Facebook Watch.