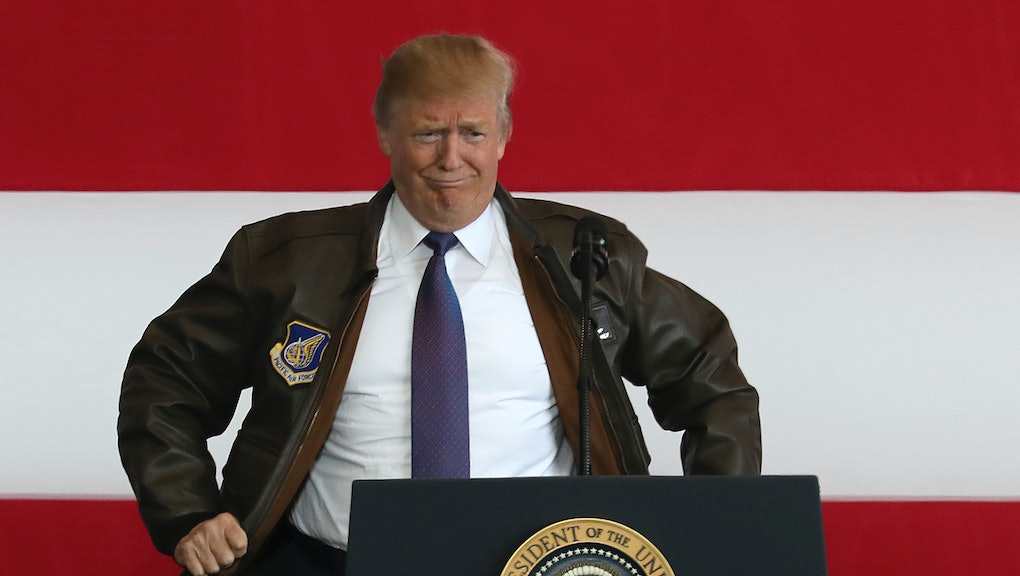 Donald Trump claims to love the military. So why can’t he stop disrespecting veterans?

President Donald Trump drew blowback Monday when he continued his absurd attack on Adm. Bill McRaven and others in the military for failing to have “captured Osama Bin Laden long before we did.”

“Fools!” Trump wrote in the tweet, suggesting that if only the military had read his 2000 book The America We Deserve, perhaps the 9/11 terrorist attacks bin Laden masterminded could have been avoided altogether.

Despite the swift debunking of Trump’s assertion that he predicted 9/11, the tweets were the latest example of Trump claiming to know more about foreign affairs and national security matters than decorated military generals and experts in the field. It was also another instance of the supposedly military-loving president lashing out at members of the military.

Trump frequently talks up his love for the armed forces. He often claims that he’s been rebuilding a “depleted” military and often referenced the military in the strange stock endorsements of Republican candidates he flooded Twitter with in the run-up to the Nov. 6 midterm elections. He famously wanted to throw a military parade. And, of course, he has used accusations of disrespecting American troops as a weapon to bludgeon opponents in his exhausting culture wars, such as his attacks on NFL players kneeling during the National Anthem in protest of police brutality and racial inequality.

But his supposed love for the troops has always been undercut by his high-profile feuds with and personal attacks on military heroes — broadsides in which he frequently criticizes the quality of his targets’ service, despite never having served himself.

One of his earliest campaign controversies in a presidential bid full of them came in 2015, when he responded to criticism from then-Sen. John McCain (R-Ariz.) by mocking his time as a prisoner of war in Vietnam.

“He’s a war hero because he was captured,” Trump said of McCain at a July 2015 event in Iowa. “I like people who weren’t captured.”

Trump would go on to beef with McCain, one of his harshest Republican critics, until the Arizona senator’s death in 2018.

Trump also spent his campaign for president bragging that he knew more about foreign affairs, war and national security than the most senior military leaders. In 2015, he claimed he both that there’s “nobody bigger or better at the military than I am” and that he knew “more about ISIS than the generals do.”

But all that arguably served as prologue for perhaps his bitterest campaign feud: his attacks on a Gold Star family. Khizr and Ghazala Khan — the parents of Capt. Humayun Khan, who was killed in Iraq — criticized Trump in a Democratic National Convention speech for his xenophobic rhetoric toward Muslims. Trump responded to the speech by implying Ghazala Khan did not speak because she was not allowed to, and by saying that the Khans had “no right” to criticize him because they have never met him.

Trump would continue to criticize the Khans, accusing them of having “viciously attacked” him and claiming that he is merely punching back. But the dustup drew sharp condemnation during the campaign, including from McCain. But the attacks were not enough to completely derail Trump’s campaign, and he continued to make disrespectful comments about service members throughout the race — including in a series of remarks in October 2016 in which he implied veterans suffering from post-traumatic stress disorder were weak.

“When people come back from war and combat and they see things that maybe what the people in this room have seen many times over, and you’re strong and you can handle it, but a lot of people can’t handle it,” Trump told a crowd during a question-and-answer session hosted by the Retired American Warriors in Virginia, just weeks before the 2016 election.

Upon assuming office, Trump promised to reverse what he called the “very sad depletion of our military,” and frequently touted himself as a uniquely pro-military president. He also notably stocked his administration with retired generals, including John Kelly — his chief of staff.

But he nevertheless continued to undercut his supposed unwavering support for the troops by picking disrespecting veterans, pushing controversial military policies and — most recently — by being conspicuously absent from events honoring soldiers’ sacrifice.

Trump drew particular blowback in October 2017, when he apparently told the pregnant grieving widow of Sgt. La David T. Johnson, who was killed in a mission in Niger, that her late husband “knew what he signed up for ... but when it happens it hurts anyway.” When Rep. Frederica Wilson (D-Fla.), who was with Myeshia Johnson during the call, called him out for the insensitive remarks, Trump unleashed a series of unhinged attacks on her, leading to death threats against the Democratic congresswoman.

Some of his policies have also been criticized as anti-military, including his push in 2017 to ban transgender Americans from serving in the armed forces.

“Our military must be focused on decisive and overwhelming victory and cannot be burdened with tremendous medical costs and disruption that transgender in the military would entail,” Trump tweeted in July 2017. “Thank you.”

The move was bashed across the political spectrum, including from Sen. Tammy Duckworth (D-Ill.), who lost her legs in combat.

“When my Black Hawk helicopter was shot down, I didn’t care about the gender identity of the soldiers who were risking their lives to save me,” Duckworth said at the time.

Trump’s relationship with American service members has been under particular scrutiny in recent days. During a trip to France in November to mark the 100th anniversary of the end of World War I, Trump skipped a planned visit to an American cemetery outside of Paris due to rain. Just a couple days later, he failed to visit Arlington National Cemetery on Veterans Day, as is unofficial presidential tradition, because he was “extremely busy.”

The back-to-back absences also drew attention to the fact that he has yet to visit troops in combat zones as president — something that an unnamed administration official told the Washington Post he’s avoided out of fear for his safety.

“He’s never been interested in going,” the official said. “He’s afraid of those situations. He’s afraid people want to kill him.”

Now, Trump appears set on feuding with McRaven — the architect behind the killing of believed 9/11 mastermind bin Laden — over critical comments the admiral made.

Trump dismissed McRaven’s criticism over the weekend, saying in a Fox News interview Sunday that the military leader was a “backer” of Hillary Clinton and Barack Obama.