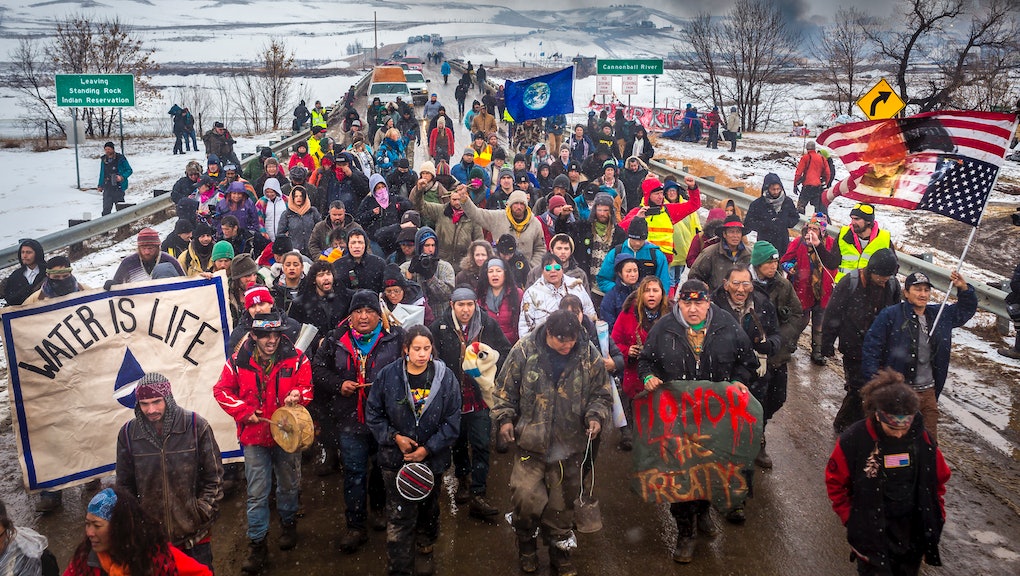 How Native Americans spend Thanksgiving: “This is a time that is a funeral for a lot of us”

When we think of Thanksgiving, we often think of it as a time of celebration. We commemorate the holiday with turkeys, football games and online shopping deals. And from generation to generation, we have passed down a tale of the first Thanksgiving dinner, one of cooperation and camaraderie among the Pilgrim settlers and Native Americans.

But for indigenous people, this revisionist story is whitewashed and erases a long history of tragedy associated with the holiday, dating back to when European settlers colonized Native American lands in the early 17th century.

“This is a time that is a funeral for a lot of us,” April Bello, a Native American teacher who is part of the Mexica tribe, said on Mic Dispatch. “Think of a time when you lost somebody. Imagine a blazing party coming through and people raging, it would feel disrespectful. My coffins are still open. My wounds are still there — they’re fresh.”

Before the events that led to the first Thanksgiving in 1621, the Wampanoag natives had already been decimated by war and diseases from European settlers. The dinner, in many ways, was a much-needed peace offering.

Centuries later, in 1863, President Abraham Lincoln declared Thanksgiving a national holiday, but he didn’t exactly have a good longstanding relationship with indigenous people either. Just a year earlier, Lincoln ordered the execution of 38 Dakota Indians, the single largest mass execution in American history, for participation in a rebellion.

The complicated relationship between indigenous people and a holiday that supposedly celebrates their history still exists to this day. On Thanksgiving Day in 2016, many indigenous people of United States protested the construction of the Dakota Access Pipeline, near Standing Rock Reservation, that would compromise the sacred cultural lands and tribal burial sites of the Sioux people.

“Native people are here just protecting their land, of what little we have left, and that we only want basic human rights,” Danielle Ta’Sheena Finn, an indigenous activist of the Standing Rock Sioux tribe, said on Mic Dispatch.

Now, many native people, including Bello and Finn, gather in ceremonies around the country to commemorate the holiday, sometimes referred to as the National Day of Mourning or “Unthanksgiving Day.”

“It is a day when indigenous people come together to remember to listen to the voices that we don’t hear in popular media and in our textbooks,” Bello said. “We have to remember: We live in a day and an age where we suffer from cultural amnesia, historical amnesia.”

In Plymouth, Massachusetts, indigenous people have gathered near the site where the Pilgrims first arrived since 1970 to mourn the lives of those lost in centuries past.

In the San Francisco bay area, indigenous people come together for a sunrise ceremony on Alcatraz Island.

“I come out here because it’s who I am,” Desiree Adams, an indigenous woman of Navajo descent told KQED, a San Francisco-based public television channel. “It’s in my blood to be here and stand for my ancestors and to keep our tradition and culture alive.”

And to some indigenous people, it’s simply a matter of choice. Some Native Americans choose to celebrate the day by “decolonizing” their dinner, a culinary movement that focuses on foods that are indigenous to the Americas, honoring their tribe.

“For Native Americans and the indigenous, decolonization is a journey of healing from our historical trauma narrative,” chef Nephi Craig, a member of the White Mountain Apache tribe, told Vice. “We shouldn’t be offended by our truth.”

And according to Bello, a school teacher, education is the ultimate key to decolonizing a whitewashed Thanksgiving for her students.

“My students surprise me,” she said. “Some people asked me, they’re like, ‘Does that mean we hate all white people?’ It made me sad. This is not about perpetuating hate. It’s about listening a little harder, and that’s what I offer to my students. It’s important to know multiple truths. As you pray over a turkey or you say thank you, remember that you are here and standing on native lands.”

Check out this episode of Mic Dispatch — only on Facebook Watch.