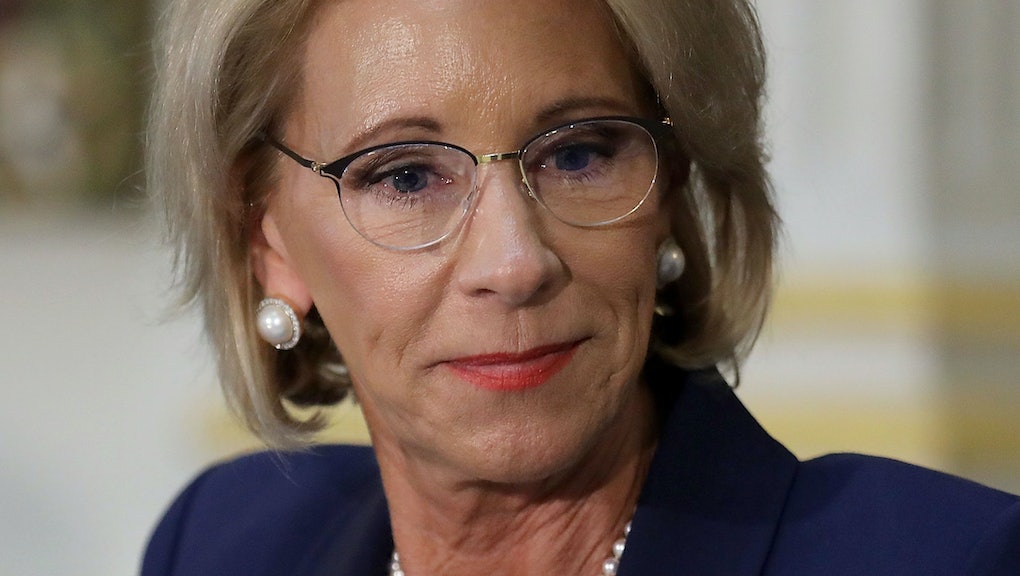 Education Secretary Betsy DeVos’ predecessor said in an interview that DeVos’ proposed new Title IX rules designed to strengthen the rights of accused sexual assaulters will have the adverse effect of dissuading victims from coming forward.

“One of the likely effects of the rules as currently proposed is that people who today would report what happened to them and be protected will now be afraid to do so,” John King Jr., who served as secretary of education during former President Barack Obama’s final year in office, said Tuesday in an interview with Mic.

The changes roll back Title IX guidelines from the Obama administration, which placed an emphasis on tackling sexual assault and harassment on college campuses with the It’s On Us campaign. Sexual assault survivors and advocates have expressed similar concerns to King that DeVos’ changes will roll back the progress made under Obama.

The changes now require students to report their assault to “an official with authority to take corrective action” in order for a school to be responsible for responding to an allegation.

Schools must also offer new due process protections to those who have been accused of harassment or assault, including giving them the right to counsel and the ability to have their accuser cross-examined.

Under the new rules, the Department of Education will raise the standard needed to convict the accused, from “preponderance of the evidence” to “clear and convincing evidence.”

And the Department of Education’s new rules also raise the bar for what counts as sexual harassment from “unwelcome conduct of a sexual nature” to “unwelcome conduct on the basis of sex that is so severe, pervasive and objectively offensive that it effectively denies a person access to the [school’s] education program or activity.”

King said the changes are in response to a “mythology around false accusation and a false equivalence around the scale of the problem.”

“They seem to have focused on trying to win the favor of some of these so-called ‘men’s rights’ groups,” King said of DeVos’ changes, referring to a group of activists who believe that women make false accusations of rape. DeVos met with men’s rights groups when coming up with the proposed changes.

“What we know is that something like one in five women will be victims of sexual assault on campuses, and cases of false accusations are exceedingly rare,” King said. “But when you hear folks in the current administration talk about issues of sexual harassment or assault, what one hears from them is the implication that false accusations are a rampant problem and that is false. There’s just no evidence to support that.”

King said that he hopes the proposed changes will be amended after a public comment period, in which the public gets the chance to provide input about the rules before they go into effect.

“If the public comment period is real, I think they’re going to get a lot of comments from colleges and universities that are uncomfortable with what’s been proposed,” King said. “And one hopes that they will reconsider the approach that they’re taking.”

However, King said he’s not optimistic that this administration will hear those concerns.

“Given the rhetoric and frankly the behavior of the 45th president, in many ways it seems like a deeply held belief on the part of the administration that there should be less consequences when someone is guilty of sexual harassment and sexual assaults,” King said.