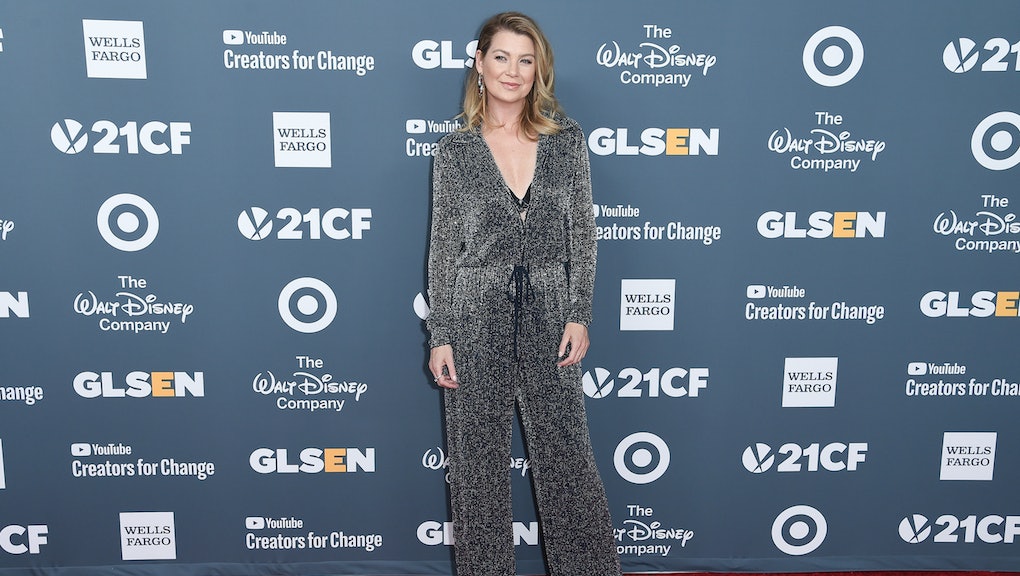 A brief history of Ellen Pompeo speaking out on race, gender and Hollywood’s wage gap

On Friday, Net-a-Porter published a 24-minute video of four powerful actresses having a remarkably candid conversation about fighting for equal wages in their industry, and a short clip of that longer video went viral Tuesday. In it, star Ellen Pompeo essentially broke the fourth wall and called out Net-a-Porter itself for not having enough staffers of color on set of the very video she was filming.

“This day has been incredible, and there’s a lot of women in the room, but I don’t see enough color. And I didn’t see enough color when I walked in the room today,” Pompeo says in the clip. “I think it’s up to all productions to make sure that your crew looks like the world we see. As Caucasian people, it’s our job, it’s our task, it’s our responsibility, to make sure that we speak up in every single room we walk into ... It’s our job, because we’ve created the problem.”

Her fellow actresses — Gabrielle Union, Gina Rodriguez and Emma Roberts —raise their eyebrows, nod and then hold out their cups to Pompeo to celebrate her words. Once the clip gained steam, more metaphorical cups were hoisted elsewhere on the internet.

It was a bold moment for Pompeo, but it certainly doesn’t represent the first time the actress has used her considerable clout to discuss issues of gender, race and the wage gap.

In January, Pompeo posed for a cover story of the Hollywoord Reporter in which the entire hook was pay inequality and her own hard-won salary of $20 million per year. In the piece, she got incredibly specific about her new contract with ABC — how it included a signing bonus, two full backend equity points on the series, and office space on the Disney lot among other perks — and shared how her employers pitted her against Patrick Dempsey, her former co-lead on the show.

“They could always use him as leverage against me — ‘We don’t need you; we have Patrick’ — which they did for years,” she said. “I don’t know if they also did that to him, because he and I never discussed our deals. At one point, I asked for $5,000 more than him just on principle, because the show is Grey’s Anatomy and I’m Meredith Grey. They wouldn’t give it to me. And I could have walked away, so why didn’t I? It’s my show; I’m the number one.”

She kept the conversation going months later on the cover of InStyle. “I asked for everything on Grey’s Anatomy because I saw a piece of paper that told me it had generated $3 billion for Disney,” she said. That information changed the game for me: knowing my numbers and having information as to what my actual worth was.” In a funny and foul-mouthed video on the set of the shoot, she lamented beauty standards and pointed out that powerful men typically look like pigs:

Pompeo’s not afraid to get political, either. In 2016, she, Kerry Washington, Viola Davis and Shonda Rhimes — the stars of ABC’s Thursday night line-up —starred in a campaign commercial endorsing Hillary Clinton for president.

And she’s talked about race and gender issues within her own family, too. “My husband is not at all intimidated by my drive, or my bossiness,” she said in October. Her partner Chris Ivery is black, and she’s discussed the need to give their mixed-race children strong black role models. “My daughters are black so it’s very important to me that they see a lot of images of beautiful, powerful, strong black women,” she said in 2016. “Every time there is a black woman on a magazine cover, whether it is Kerry Washington or whoever it is, I make sure that magazine is in my house and on my table. For me, that’s super important.”

Pompeo doesn’t save her candor for the tough stuff. She’s also been incredibly open about drama on the set of Grey’s Anatomy. “Hurt feelings, combined with instant success and huge paychecks started things spinning out of control,” she observed in 2013, insulting her former colleague Katherine Heigl in her next breath for causing some of the headlines. “Katie’s problem is that she should not have renewed her contract. She re-upped, took a big raise and then tried to get off the show. And then her movie career did not take off.” Zing!

Clearly, Pompeo is not afraid to say what’s on her mind, but she uses that astonishing honesty to demand a more equitable society. In demanding (and getting) a greater salary, and in just doing a great job on her show, she’s earned that honesty, and its impact. Just imagine what she’ll say next.