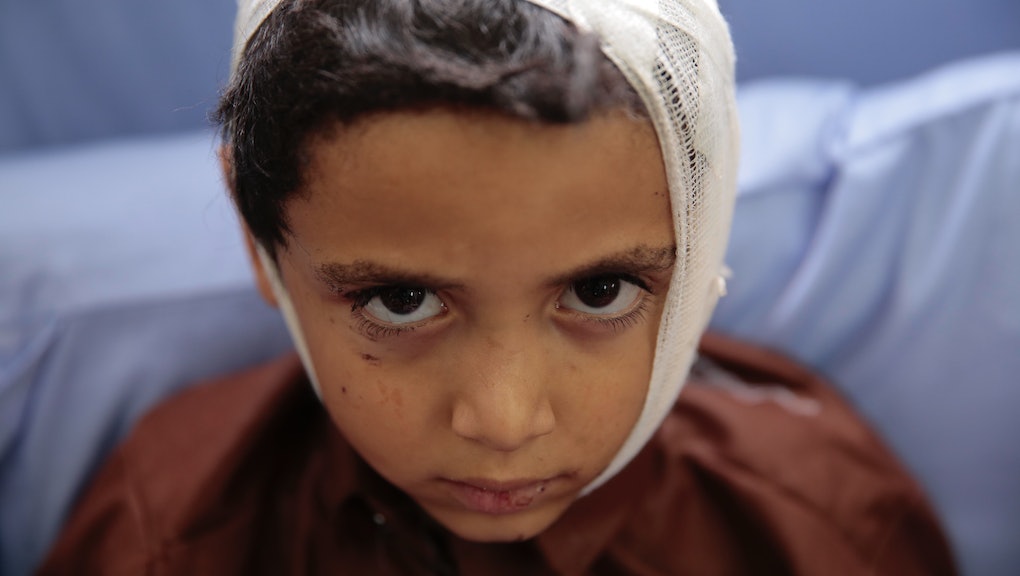 Trump absolving the Khashoggi killing is bad. Trump backing the Saudis’ war in Yemen is worse.

President Donald Trump this week stunned the world when he announced in a statement that he not only doubts the CIA conclusion that Saudi Crown Prince Mohammed bin Salman directed the killing of journalist Jamal Khashoggi — but that he doesn’t even care if he did.

“Our intelligence agencies continue to assess all information, but it could very well be that the Crown Prince had knowledge of this tragic event – maybe he did and maybe he didn’t!” Trump said in a bizarre, exclamation-laden statement on Tuesday. “That being said, we may never know all of the facts surrounding the murder of Mr. Jamal Khashoggi. In any case, our relationship is with the Kingdom of Saudi Arabia.”

Trump added that the U.S “intends to remain a steadfast partner of Saudi Arabia to ensure the interests of our country, Israel and all other partners in the region.”

It was a striking statement by an American president, publicly absolving a problematic foreign leader for the grisly alleged execution of a U.S. resident. It was perhaps more striking, still, for his defiant doubling-down on it in a press scrum later that day and for his gleeful tweet thanking the kingdom Wednesday morning for lowering oil prices.

While his siding with Riyadh in the October Khashoggi killing has drawn the most scrutiny, the statement was also notable for Trump’s apparent continued backing of the Saudi war in Yemen, which has precipitated one of the most devastating humanitarian crises of our time.

“The president’s statement is appalling and a clear abdication of U.S. moral leadership,” Rep. Adam Smith (D-Wash.), the ranking member of the House Armed Services committee, said in an email. “The message it sends to regimes around the world is gravely concerning, that the U.S. will turn a blind eye to such a grotesque act.”

“Our full backing of the Saudi coalition must stop and we should focus on urging a peaceful resolution and alleviating the humanitarian crisis,” Smith added.

Riyadh’s intervention in Yemen’s civil war began in 2015, with the U.S. supporting the kingdom in what has been viewed as a proxy battle between Saudi Arabia and Iran.

One of the most devastating Saudi actions in the country has been its blockade of medical supplies and food, which has helped spur a famine that has left millions of civilians, including children, on the brink of starvation. According to one recent estimate by Save the Children, about 85,000 children have died in Yemen since the start of the intervention.

Saudi Arabia’s inhumane actions in Yemen have received more attention in recent weeks because of the Khashoggi killing, but the Trump administration has largely refused to withdraw its support for the regime. The administration in early November announced it would stop refueling Saudi planes in Yemen, but the U.S. has continued to back the Saudis — and Trump in his statement seemed to indicate he is not wavering in his support for the kingdom, appearing to blame Iran for the ongoing humanitarian crisis.

“The country of Iran ... is responsible for a bloody proxy war against Saudi Arabia in Yemen,” Trump said. “Saudi Arabia would gladly withdraw from Yemen if the Iranians would agree to leave. They would immediately provide desperately needed humanitarian assistance.”

But that statement mischaracterizes the situation in Yemen and fails to hold Saudi Arabia accountable for its actions, according to Kate Kizer, policy director of Win Without War, a progressive foreign policy program at the Center for International Policy.

“Trump’s statement makes clear he will allow nothing to interfere with his dangerous march to war with Iran,” Kizer said in an email interview. “His message is that [bin Salman] can starve millions, kill journalists and bomb civilians with impunity and there will be no repercussions from this administration.”

The U.S. and Saudi Arabia have enjoyed a special, but complicated, relationship for decades. While the Khashoggi killing has led to a rethinking of that partnership, Trump in his statement seemed to imply that the U.S. has no choice but to stand with the Saudis because of the role they play in helping America “eliminate the threat of terrorism,” as well as their oil production and benefit to the U.S. economy.

But, according to Kelly Magsamen, vice president for National Security and International Policy at the Center for American Progress and a former member of the National Security Council under Presidents Barack Obama and George W. Bush, such an assessment abdicates American power and moral leadership.

“Trump is sending a signal that America will look the other way instead of using its leverage,” Magsamen said in an email. “That we are the weaker party, not the superpower.”