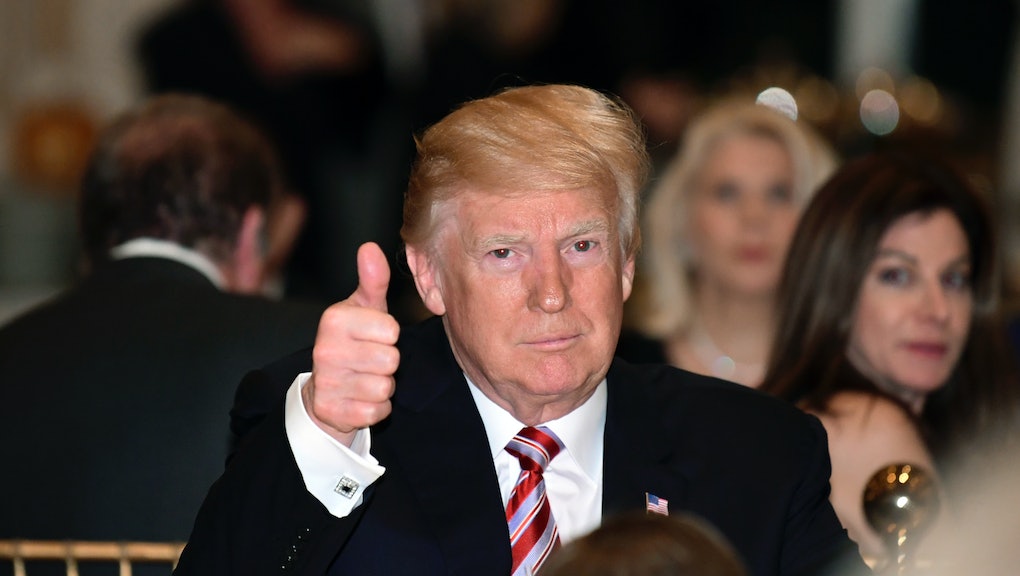 Today in Trump’s America: Trump airs grievances on day meant for reflection and giving thanks

Happy Black Friday, readers. I hope you had a wonderful time celebrating Thanksgiving on Thursday, and I’m thankful that all of you read and subscribe (hint hint) to my newsletter. I’ve emerged from my tryptophan-induced stupor for another installment.

• Trump is at his Florida resort, Mar-a-Lago, and has no public events on his schedule. The weather in Palm Beach is partly cloudy with a high of 78 degrees Fahrenheit, which means there’s a good chance Trump will hit the links, which the White House press office will refuse to confirm.

About last night: For Trump, Thanksgiving was more like Festivus

Thursday may have been Thanksgiving in the United States — a day meant for reflecting on what you have and giving thanks for those blessings — but for Trump, it felt more like Festivus, the secular holiday created by Seinfeld, in which airing grievances is one of the main traditions.

Trump started his day with an all caps message to the country. “HAPPY THANKSGIVING TO ALL!” he tweeted.

But his rhetoric quickly devolved from there.

In a subsequent Tweet, Trump attacked Supreme Court Justice John Roberts (who had condemned Trump’s politicization of the judicial branch on Wednesday), saying that Roberts was wrong and that the 9th Circuit Court based in California “is overturned more than any Circuit in the Country” — a completely false statement.

Trump went on to say that law enforcement should “BE ALLOWED TO DO THEIR JOB!” at the border, or else there will be, “bedlam, chaos, injury and death.” What a joyous Thanksgiving message.

Later, Trump had a phone call with troops from his opulent gold-accented Mar-a-Lago resort, in which he told the troops he was most thankful for himself (yes, he actually said that).

“I made a tremendous difference in our country,” Trump told the service members, a conversation that later devolved into Trump complaining about everything from trade to the Navy’s use of electromagnetic catapults on aircraft carriers, rather than steam catapults.

Following the call, Trump then spoke with the media for nearly half an hour, during which he said he’s still considering shutting down the entire U.S.-Mexico border; blamed “the world” for the death of Saudi Arabian dissident and journalist Jamal Khashoggi, rather than Crown Prince Mohammed bin Salman; and made up an evidence-free claim about Hillary Clinton’s private email use to defend his own daughter Ivanka Trump’s use of personal email for official business.

Former FBI Director James Comey said on Thursday that House Republicans subpoenaed him to testify — a subpoena Comey said he’ll fight unless the GOP agrees to interview him in a public setting.

“Happy Thanksgiving. Got a subpoena from House Republicans,” Comey tweeted. “I’m still happy to sit in the light and answer all questions. But I will resist a ‘closed door’ thing because I’ve seen enough of their selective leaking and distortion. Let’s have a hearing and invite everyone to see.”

House Republicans subpoenaed both Comey and former Attorney General Loretta Lynch as part of their investigation of alleged anti-Trump bias in the Justice Department. The subpoenas come before House Republicans’ power will disappear when Democrats take control of the chamber in January, when the new Congress is sworn in.

“Mr. Comey embraces and welcomes a hearing open to the public, but the subpoena issued yesterday represents an abuse of process, a divergence from House rules and its presumption of transparency,” Comey’s lawyer, David Kelley, said in a statement to Politico. “Accordingly, Mr. Comey will resist in Court this abuse of process.”