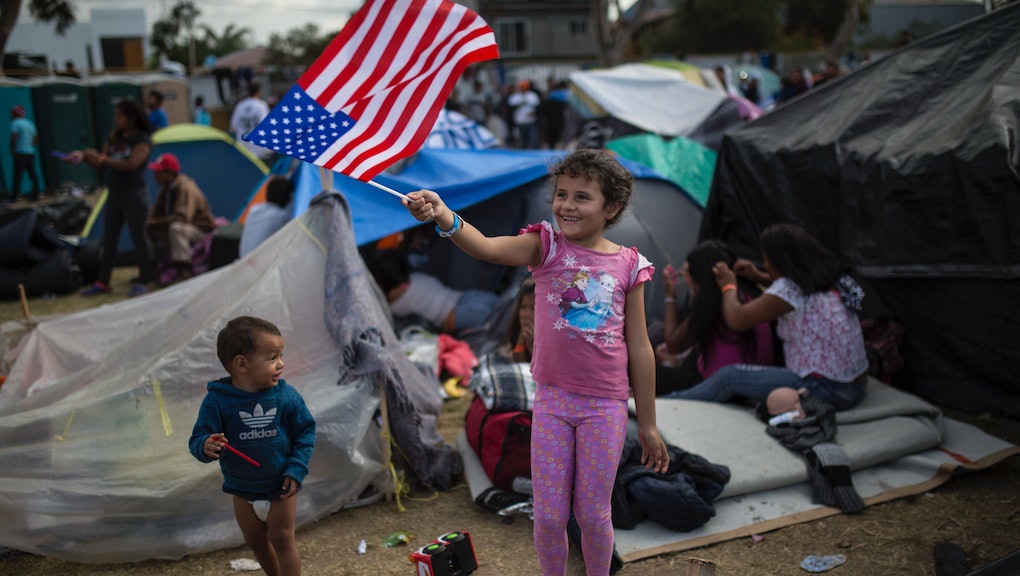 Mexico’s incoming administration now denies deal with US on immigration

While tensions at the United States-Mexico border reached a fever pitch over the weekend, the governments of both countries are apparently mired in bureaucracy amid the conflicting statements on agreements over the escalating battle over immigration.

On Nov. 24, the Washington Post cited a top official in the administration of Mexican President-elect Andrés Manuel López Obrador claiming that Mexico had signed on to an immigration overhaul of the Trump administration’s design. The Post reported that the deal would involve holding asylum-seekers on the southern side of the U.S.-Mexico border until their claims are processed by American courts.

“For now, we have agreed to this policy of ‘Remain in Mexico,’” Mexico’s incoming interior minister, Olga Sánchez Cordero, told the Post.

“The medium- and long-term solution is that people don’t migrate,” Cordero said. “Mexico has open arms and everything, but imagine one caravan after another after another. That would also be a problem for us.”

The existence of such an agreement was seemingly backed up by President Donald Trump, who described it in similar detail in a pair of tweets Saturday.

“Migrants at the Southern Border will not be allowed into the United States until their claims are individually approved in court,” Trump wrote. “No ‘Releasing’ into the U.S.... All will stay in Mexico.”

“If for any reason it becomes necessary, we will CLOSE our Southern Border,” the president warned. “There is no way that the United States will, after decades of abuse, put up with this costly and dangerous situation anymore!”

But in a statement issued Saturday just hours after the Post story went live, Cordero’s office walked back earlier assurances that an immigration deal was being firmed up.

“No agreement of any kind exists between Mexico’s future federal government and the United States of America,” Cordero wrote in the statement. “The future government is not considering in its plans that Mexico assumes the role of ‘safe third country’ for Central American migrants or [migrants] from other countries, who find themselves in Mexican territory.”

During his campaign for the presidency, López Obrador — who is often referred to as AMLO in the press — gave few details on his plans to handle an influx in Central American migrants passing through Mexico on their way to the United States. López Obrador only said he would “not do the dirty work of any foreign government” if elected. However, while Mexico seems more keen to take a backseat to the United States when it comes to handling the immigration crisis, a ratcheting up of tensions at the border could soon compel the López Obrador government to action.

In October, one of several caravans comprised mostly of Central American migrants fleeing violence and governmental corruption in their home countries pushed its way into Mexico. The mayor of Tijuana has subsequently declared a humanitarian crisis, claiming the city is not equipped to handle the sudden appearance of more than 5,000 Central American refugees.

The United States has also responded to the sudden surge of asylum-seekers, whom the president referred to as “invaders” and “criminals” in the weeks leading up to the 2018 midterm elections. On Oct. 29, Trump ordered that U.S. military troops be deployed to areas in California, Arizona and Texas, where they had been mostly tasked with laying barbed wire and erecting tent facilities as they awaited the approaching caravan of migrants.

On Sunday, however, U.S. border agents attacked migrants from the caravan directly for the first time, deploying tear gas into a crowd of hundreds of migrants — some of them infant children — who had approached the border at Tijuana.

“Shooting tear gas at children is not who we are as Americans,” Tom Perez, chairman of the Democratic National Committee, tweeted. “Seeking asylum is not a crime. We must be better than this.”

In response to images of mothers and children fleeing tear gas at the border, Trump tweeted tauntingly that the Mexican government, “would be very SMART ... [to] stop the Caravans long before they get to our Southern Border.”

“Mexico should move the flag waving Migrants, many of whom are stone cold criminals, back to their countries,” he added. “Do it by plane, do it by bus, do it anyway you want, but they are NOT coming into the U.S.A. We will close the Border permanently if need be. Congress, fund the WALL!”