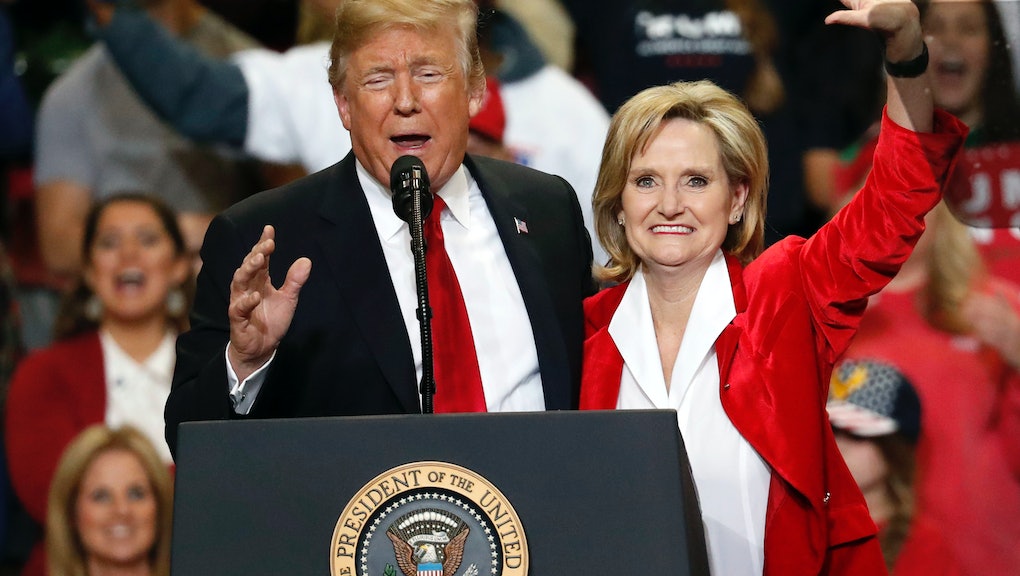 There’s a good argument the seat, held by Sen. Cindy Hyde-Smith (R-Miss.) in a deeply Republican state, was already safe. But Trump is hoping that two rallies he held in Tupelo and Biloxi will put Hyde-Smith over the top, boosting her to victory over Democrat Mike Espy on Tuesday in a runoff election.

“Don’t take any chances,” Trump said at his first rally Monday afternoon in Tupelo. “You have to vote. We cannot allow Nancy Pelosi and Chuck Schumer to erode [GOP control of the Senate] by winning the great state of Mississippi.”

Hyde-Smith told voters they weren’t just voting for her but also to uphold “your conservative values.”

In normal circumstances, this race would fly under the radar of the national media, as Mississippi is so heavily Republican that Democrats rarely have a chance at statewide victory here. The last Democrat to win a Senate seat in the Magnolia State was John C. Stennis, who won re-election in 1982 and retired in 1989.

But this runoff — sparked when no candidate garnered the 50% needed to win outright in the Nov. 6 midterm elections — has been catapulted into the national spotlight, thanks to racist comments by Hyde-Smith. It all started on Nov. 11 when a video was released in which she says she would enthusiastically attend a “public hanging” if one of her supporters invited her. The comment struck a nerve in Mississippi, which has a grisly history of lynchings, when racist whites would publicly hang black men and women.

Shortly after, another video was released showing Hyde-Smith saying it would be a “great idea” to make it “just a little more difficult” for college students to vote.

The comments led a number of companies, including Walmart and Major League Baseball, to ask for Hyde-Smith to revoke donations their political arms had made to her campaign.

Still, while national media has descended upon the state to cover the runoff, public data doesn’t really show a competitive race. Every poll released so far has shown Hyde-Smith with a double-digit lead over Espy, according to surveys posted by RealClearPolitics.

And the results from the Nov. 6 election suggest Espy has a huge hurdle to overcome. In that first round, Hyde-Smith took 41.5% of the vote while Espy took 40.6%. However, a third Republican candidate on the ballot, Chris McDaniel, received 16.5%, making the combined GOP vote in that first ballot 58%.

Ultimately, whoever wins will not serve the normal six-year stint in the Senate, as this is actually a special election to serve out the remainder of GOP Sen. Thad Cochran’s term, which expires in 2020. Cochran resigned on April 1 for health reasons, and GOP Gov. Phil Bryant appointed Hyde-Smith as his replacement.