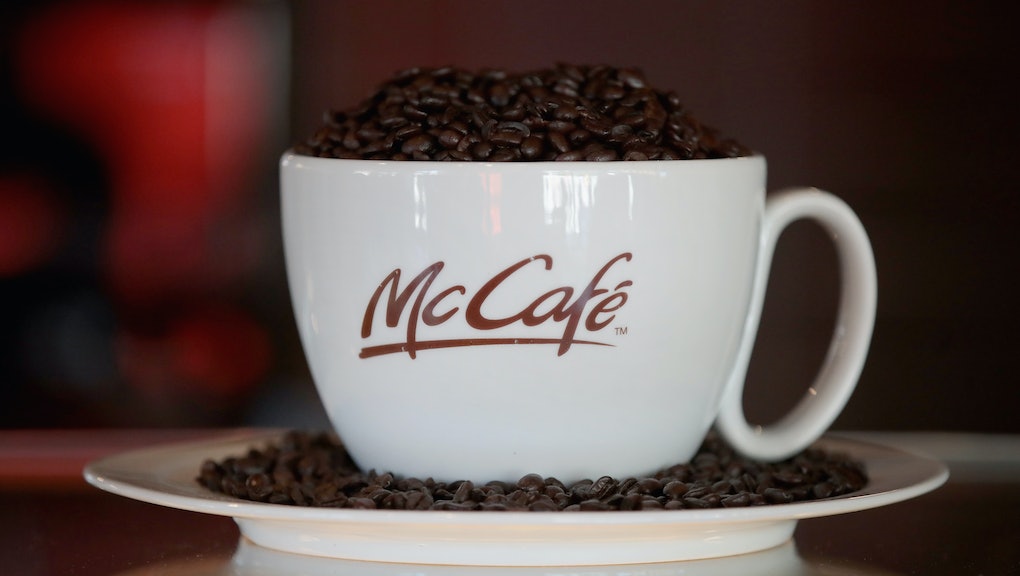 McDonald’s could change the coffee industry as we know it

McDonald’s announced on Thursday that 84% of the coffee in its U.S. restaurants is sustainably sourced, an accomplishment driven by the company’s goal to protect the coffee crop from the very real threat of climate change. In 2014, McDonald’s first announced a plan to get 100% of its coffee sustainably sourced by 2020, so it seems the company is on its way to achieving its goal.

“Sustainably sourced” implies a product is cultivated in a way that is gentle on the environment and makes a positive impact on the people who work its supply chain, according to Conservational International, an organization that works with Starbucks, and now McDonald’s, on instilling better sustainability practices worldwide.

Coffee and climate change are intertwined: A 2014 study found that by the year 2050, climate change could cut the areas of land suitable for growing coffee by 50%. This would make quality coffee harder to grow and more costly to buy.

This impact isn’t brand-new insight to the coffee industry, and McDonald’s is by no means the first to take notice. Since 2015, 99% of Starbucks coffee has been sustainably sourced. “Make no mistake, climate change is going to play a bigger role in affecting the quality and integrity of coffee,” Howard Schultz, former CEO of Starbucks, told Time in June.

Still, it is a really big deal that McDonald’s is focusing on this issue because McDonald’s, which serves 68 million people every day, has the power to influence other companies and emphasize consumer values in ways other brands can’t. While the fast-food chain is most often associated with selling products like McNuggets, provoking junk-food addictions and contributing to the childhood obesity crisis, it is also an agent for change. In 2015, Mickey D’s pledged to use only cage-free eggs in its restaurants by 2025, a decision that had a domino effect in both the restaurant and agriculture industry. McDonald’s USA purchases an estimated 2 billion cases of eggs year, which adds up to about 2% of the country’s entire egg supply, the Chicago Tribune reported. In this sense, McDonald’s has a massive influence over suppliers and can make demands that are heard in ways a less powerful group cannot.

In the U.S. alone, McDonald’s sells 500 million cups of coffee per day. If all of those cups are filled with sustainable coffee, competitors will have no choice but to follow McDonald’s lead. A new report from Nielsen highlights how consumers’ interest in environmental issues has soared: One data point shows 69% of North American consumers expect companies to care about the environment — and a growing amount will spend money on brands that align with this thinking.

When a business like McDonald’s takes on a food trend or a cause, “the economic impact reverberates throughout the entire food system,” David Sax, author of The Tastemakers, said in a previous interview with Mic. “The purchasing size is a signal to the rest of the industry that there’s a shift in a collective appetite.”

McDonald’s is far from perfect, and the fact that it’s announcing an 84% completion rate in the U.S. (and just 54% of all McCafé coffee worldwide) seems oddly timed and is maybe even a strategy to soften the heartbreak if it has to recognize that it hasn’t achieved its goal come 2020. Plus, if McDonald’s is truly concerned about the impact of climate change, it will also need to — quickly — address sustainability around many of its other offerings, including that of beef and chicken. Still, its priority around coffee sustainability is noteworthy for the power it has to change industry practices and educate consumers around the world.