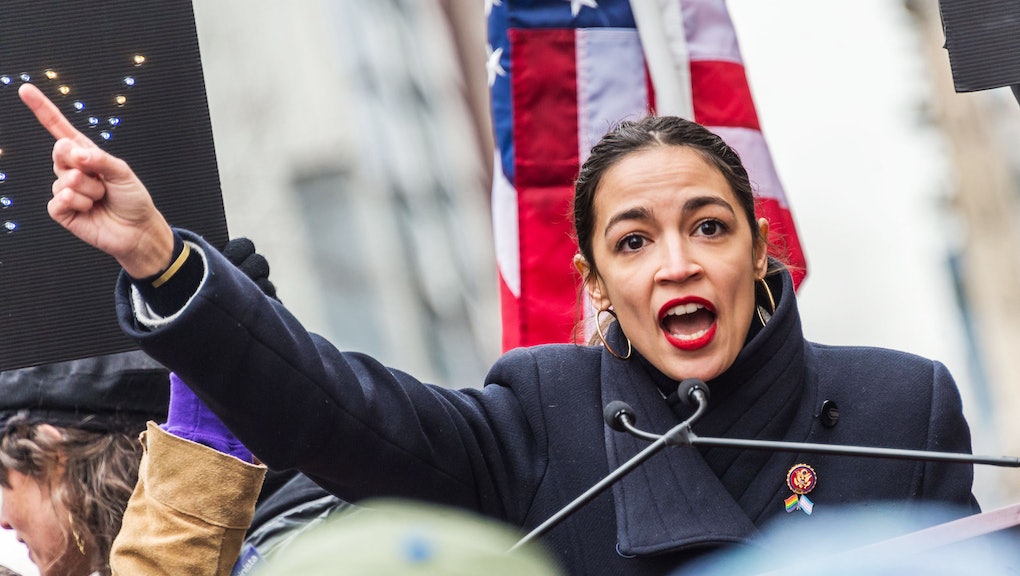 The billionaires in Davos don’t take Alexandria Ocasio-Cortez seriously. They should.

CEOs will fix the world’s problems.

Or at least, that was the resounding message coming out of Davos last week, during the annual meeting of the World Economic Forum in Switzerland.

This year’s gathering of the who’s who of politics, business and tech took place under a cloud of, well, chaos all over the globe: the U.S. government shutdown and U.S.-China trade war; the U.K. Brexit debacle; yellow vest protests in France; a presidential crisis in Venezuela; a looming global economic slowdown; and soaring inequality across the globe.

Against this gloomy backdrop, those with the world’s most wealth and power made it clear how they believe these problems can best be solved: on their own.

During panels and after-dinner parties, platitudes about the role of business in the world rolled off the tongue: “It’s time we make globalization work for everyone!” “We need to do more to address inequality!” “Tech companies need to self-regulate!” “Business is a force for good!”

Rather than confronting soaring inequality with more robust government-led solutions that would see their taxes rise (or their fortunes diminish), most of the world’s business leaders would prefer self-regulation. Falling back on their philanthropic instincts. Tinkering at the margins.

This approach has its merits. Business leaders can without a doubt have an outsized impact on society. In fact, according to an annual survey released by the global public relations firm Edelman, trust in CEOs to do the right thing is on the up and up. Millennials now expect business leaders to speak out about societal issues, and in recent years, we’ve seen many CEOs respond by championing important causes.

But the majority of Americans are not looking for band-aid solutions; they’re seeking more radical change. Far from the snowy slopes of Davos, 30,000 teachers just picketed for higher wages in Los Angeles, while 800,000 federal workers suffered due to the U.S. government shutdown. On the horizon, a staggering 25% of the American workforce could soon lose their jobs due to automation.

As AFL-CIO labor activist Elizabeth Shuler put it on a panel in Davos, “We’re seeing an uprising across the country,” as companies participate in a “race to the bottom” for workers.

All of which brings me to Alexandria Ocasio-Cortez. It was remarkable to hear how frequently the 29-year-old freshman congresswoman and media sensation was talked about in Davos — in the hallways, during sessions, over cocktails — albeit rarely in the positive.

During a breakfast panel, former commerce secretary Penny Pritzker was asked about Ocasio-Cortez’s policy proposals, and in a telling moment, she replied they are “not a winning formula for the United States.” CEO of Dell Technologies Michael Dell had this to say about Ocasio-Cortez’s calls for a 70% tax on the wealthy: “I’m not supportive of it. And I do not think it will help the growth of the U.S. economy.”

In an interview with CNBC from Davos, Bridgewater founder Ray Dalio said in response to a question about Ocasio-Cortez, “We have to make capitalism work for the majority of Americans. I don’t know that we’re in agreement on the mechanics.”

Over and over again, business leaders dismissed Ocasio-Cortez, and the progressive ideas she is championing, outright. But according to data, they would be wise not to: The majority of U.S. voters support Ocasio-Cortez’ plan for a 70% top-income tax rate; and various polls show that millennials now prefer socialism to capitalism.

This is not to say that Ocasio-Cortez’ tax proposal is right for today’s economy. There is legitimate debate to be had around her idea, as well as the role that government should play in redistributing wealth more broadly. But this is not the debate that’s currently taking place in Davos, and that’s the problem.

How these competing visions for change play out will be one of the important stories to watch in the coming years and already one of the major themes of the 2020 election. For example, Democratic presidential candidate Elizabeth Warren’s “wealth tax” proposal on the super-rich was panned by billionaires but met with loud praise by progressives on social media.

During the 2016 election, elites dismissed then-candidate Donald Trump over and over again, while he rode a populist movement to the White House. Today, we’re in the midst of another populist wave, this time on the left. Elites would be wise to take it more seriously.