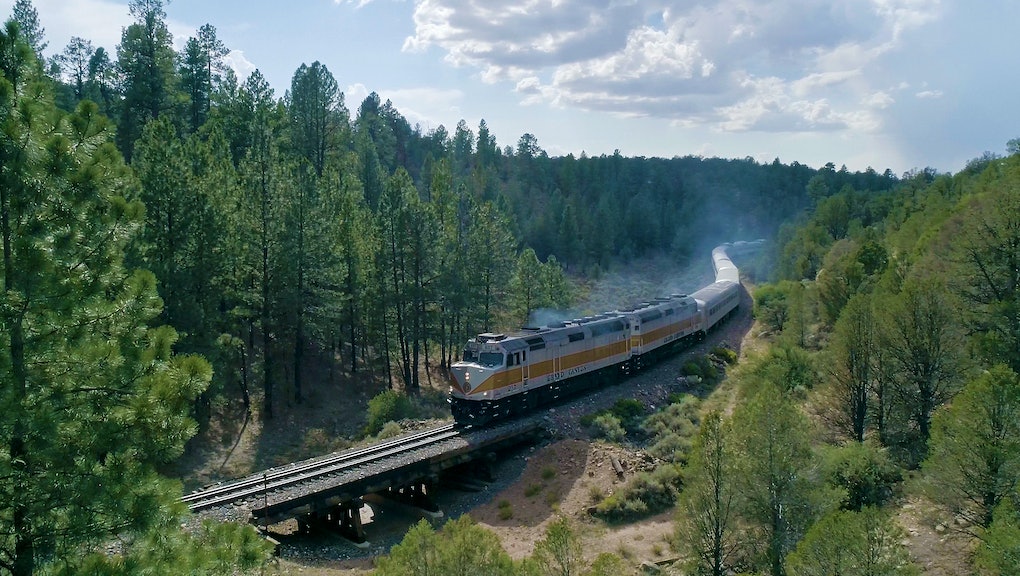 4 scenic train rides in the U.S. and Canada that are way better than flying

Chances are, we’ve all heard some variation of the phrase, “it’s not about the destination; it’s about the journey.” But by and large, when it comes to vacation, we’re focused on the destination — and we take planes to get there. And sure, that has merit: If you have a week off of work, you probably want to spend that time being on vacation, not getting to vacation. Then again, it’s possible to do both at once with a train ride. Cross-country train travel may seem like little more than a relic from the past when flying wasn’t so accessible; but in reality, it’s a nostalgic way to experience multiple destinations and the beautiful space between them, all while relaxing and letting someone else take the wheel (major points over road tripping). Train travel “is less about getting somewhere and more about being somewhere,” said Olivia Irvin, public relations manager with Amtrak. “And that somewhere can offer some fantastic views along the way.”

With that in mind, here are four scenic train routes in the United States and Canada to add to your bucket list:

The Grand Canyon Railway offers one route, from Williams, Arizona to Grand Canyon National Park — and it’s a pretty incredible way to experience one of the natural wonders of the world. The 65-mile journey itself (which takes a little over two hours) is full of history, from the more-than-100-year-old depots on either end, to the landscape you’ll pass through on the way and the restored rail cars you ride in to get there. “The train is mostly from the 1950s and in pristine condition,” said René Mack, president of Percepture and a spokesperson for Grand Canyon Railway. “And because the railroad was there before the national park, the railway actually pulls up right in front of El Tovar, the famous hotel which was also built by the railway, and you’re steps away from the south rim of the Grand Canyon.”

When you’re not taking in the changing landscape and wildlife, you can enjoy the on-board entertainment, including live music and a Passenger Service Attendant who can tell you all about the canyon and the other stunning areas you pass through to get there. “It’s a very educational and also entertaining way...to access one of nature’s overwhelming and very humbling experiences,” Mack said.

Rocky Mountaineer’s most popular offering follows the historic route that first connected Canada from east to west 130 years ago — but the history is far from the only selling point. “The train travels from lush rainforests, through the semi-arid desert, alongside the powerful Kicking Horse River, and into the Rocky Mountain towns of Lake Louise and Banff,” said Alison Stewart, Senior Director of Guest Services at Rocky Mountaineer. You can choose among a handful of trip packages, ranging from two days to 21 days, all of which include hotel stays for the evenings. “The train only travels by daylight, so guests don’t miss a moment of the passing scenery,” the spokesperson said.

The train itself has large glass dome windows perfect for sightseeing, gourmet dining options, onboard hosts to regale you with stories as you go and open-air viewing areas, among other features. “From the glass-domed train it is a unique way to experience the sheer sides of mountains, steep canyons and untamed western wilderness,” Stewart said.

Sure, road-tripping along the West Coast can be fun; but train-tripping gives you the chance to enjoy the infamous coast on a whole new level. Amtrak’s Coast Starlight travels from Los Angeles to Seattle, with countless stunning sights in between. “Along the route, you get to see coasts along southern California, beautiful wineries as you hit central California and amazing redwoods as you enter Northern California and the Pacific Northwest,” said Irvin. “I can’t tell you how many people have told me this trip is on their bucket list, and for the breathtaking views alone, I recommend this route to everyone.”

While on board, you can snooze in a sleeping car (there’s a range of accommodations, including “roomettes,” bedrooms and bedroom suites), fuel up in the dining car and take in the views from the Sightseer Lounge Car.

A different kind of coastal trip, Alaska Railroad’s Coastal Classic route will take you through some of the state’s most awe-inspiring landscapes, all in one day. Travel between Anchorage and Seward (with one stop in Girdwood) along Alaska’s Turnagain Arm shoreline, taking in glaciers, waterfalls and mountains as you go. Depending on the service class you choose, you can see it all through glass-dome ceilings and outdoor viewing platforms or large picture windows.

The trip allows time to explore Seward (you can take a boat cruise of Resurrection Bay to Kenai Fjords National Park, or experience dog sledding during a land tour, among other options) before heading back on the train that same day.