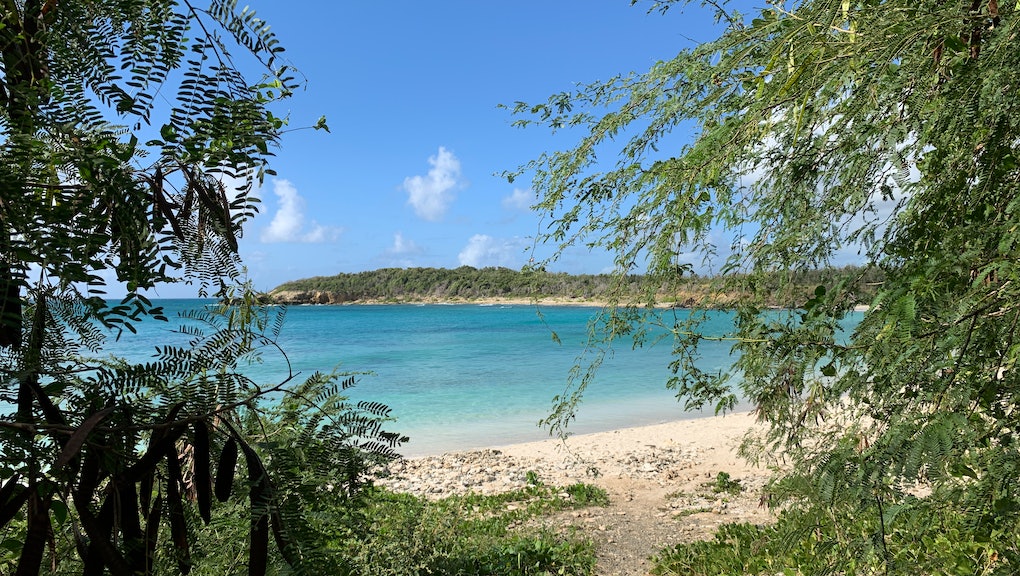 “You don’t need more than a couple days there.” That’s a sentence that seems to often come through word-of-mouth recommendations about small cities or remote islands that aren’t necessarily home to lots of *things*. It’s a sentence that passed through my mind while my husband and I were booking a nine-day winter trip to the Caribbean. We settled on Vieques, a 21-by-5-mile Puerto Rican island seven miles off the coast of mainland Puerto Rico. “Should we do half our time in San Juan or on a different island?” The ultimate answer was no. We spent our entire nine days in Vieques, and I could have happily stayed for many more.

The trip felt unique from the moment our 6-seater plane took off from San Juan — one of only two ways to get to Vieques, the other being an hour-long ferry that takes off from the other side of the mainland. Flying over Puerto Rico’s lush landscapes and the piercing blue Caribbean waters in that little puddle jumper, I got the sense I was going somewhere special. And Vieques is indeed that. The municipality, home to 9,000 people, has a storied history — including being used by the U.S. Navy for bombing practice for decades; and, more recently, being battered by Hurricane Maria — as well as a unique character and sense of pride eminent throughout those 21 miles. “I chose Vieques because of the cool, funky vibe of the island that you cannot explain well — the combination of the people, the physical beauty and the local color,” said Rachel Morris, a co-owner of adventure tour company Black Beard Sports who moved to Vieques from Dallas, Texas.

As our trip went on, it became clear most visitors don’t stay as long as we do — servers at the open air restaurants started recognizing us just from walking by, and the staff at our hotel referred to us as their “nine nighters.” But, while Vieques can be a day-trip or weekend destination, there are plenty of reasons to stay even longer.

Hurricane Maria took its toll on Puerto Rico in 2017, and Vieques was no exception. “The island was nearly devastated from the standpoint of being able to provide necessary resources like electricity and often reliable water,” Morris said. Fred McAfee, a co-owner of Malecón House hotel, said it took several months to regain basic infrastructure like phone and water systems. But, Morris said, “The people are resilient and worked together with the aid that did seem to make it to Vieques and have rebuilt the necessary infrastructure to thrive again.”

Indeed, Puerto Rico officially reopened for tourism in December 2017; and Laine Gorman, general manager at El Blok Hotel, Restaurant and Bar said tourists started trickling back in to Vieques the following month. She noted that some recovery is ongoing, but the island is prepared for and happy with returning tourists. “We’re thrilled to have tourists visit us,” she said. “Tourism is our life blood, and so visiting puts money directly into the hands of the those that need it to keep our local economy moving.”

It’s a sentiment I heard echoed by everyone I met in Vieques, from restaurant servers to local artists and tour guides. “Viequenses, residents local to Vieques, are...happy to share their food, their culture and their island with people who come to fall in love with this slice of paradise,” said Cindy Mitchell, a co-owner of Black Beard Sports.

In Vieques, it’s all about boutique lodging. (While there was previously one large resort on the island, a W Hotel, it closed and has yet to reopen following Hurricane Maria.) We spent the entirety of our nine-day stay at Malecón House, a 13-room oasis on the boardwalk in Esperanza, a relaxed seaside village — waking up to a view of the water, eating continental breakfast by the plunge pool, and borrowing the folding chairs and small coolers for our days at the beach.

Visitors can also check in to El Blok, a modern, adults-only boutique hotel with a trendy and delicious restaurant (which is so good that we went twice, and I can’t stop thinking about my Tostones Sliders); or Hix Island House, a solar-powered and sustainability-focused retreat centrally located on the island.

Large resorts aren’t the only thing absent from Vieques — the island is free of all sorts of commercial development that could impede its low-key vibes and natural beauty. “Much of the island is still untouched and unspoiled,” Mitchell said. “Vieques is a bit difficult to get to, which is okay with us locals! Because of these difficulties, Vieques remains untouched by...U.S. chains, [like] restaurants and stores.”

Instead of being sucked in by chains, shopping centers or other big developments; visitors can relish in the fact that the main things to do on Vieques are relax, explore the outdoors and marvel at the wildlife — and wildlife, there is plenty. Countless horses roam the island, crossing the street without a care for holding up traffic, grazing on grass and even hanging out at the beach. (Those who want to get even closer can take a scenic beach-and-trail ride with Esperanza Riding Company). Aside from the horses, you’re likely to see a range of wildlife, including birds (Vieques is home to about 190 species), Puerto Rican coqui frogs, iguanas and more. In fact, a huge portion of land (totaling almost 18,000 acres) is home to the Vieques National Wildlife Refuge, which was designated after the U.S. military withdrew from the island.

Animals aside, Vieques is teeming with lush landscapes and natural beauty ready to explore, including Playa Negra, a black sand beach you can reach via a short hike; and the tropical vegetation surrounding the ruins of the former Playa Grande Sugar Plantation. And then there’s the 300-year-old Ceiba Tree, with its massive trunk and sprawling, exposed roots. “The tree has become a sacred site for locals and tourists to come and enjoy,” said Brad Dean, CEO of Discover Puerto Rico. “The Ceiba Tree stands strong just like the people in Vieques. It is a symbol of the resiliency of the island.”

“There is just something magical about Vieques that captures your heart,” Gorman said. “It’s the last wild frontier and truly virgin island.”

Perhaps Vieques’ biggest draw — and another example of its untouched natural beauty — is its collection of stunning and serene beaches. If you’re staying in Esperanza, you can walk to Sun Bay and Esperanza Beach, both of which have convenient food and bathroom options nearby (Sun Bay has picnic tables and a campground as well). But it’s also worth it to rent a car (we did so through Maritza’s Car Rental) so you can explore the further-reaching beaches, primarily the secluded ones within the Wildlife Refuge. Sometimes I just stare at my pictures from Pata Prieta Beach (also known as “Secret Beach” — entering the cove through the narrow trail feels a bit like stepping into a tropical Narnia) and La Plata Beach, dreaming about the calm, clear turquoise waters and soft sand. While there aren’t food options within the refuge, you can pack a lunch or head just outside of the refuge for a quick meal at Gracias, De Nada a colorful food truck offering tasty burgers, hot dogs and burritos and a small patio where you can enjoy them.

The beaches are worth it just for sitting and relaxing in the sun, but Vieques is also a prime snorkeling and scuba spot for those interested in getting a glimpse at the underwater wildlife — in fact, it’s where I completed my PADI open water certification. We had a windy day, which kept the sand moving through the water, but between my skills test, I was able to catch a glimpse of a spotted eagle ray as it glided under the pier. “Vieques is surrounded by many seagrass sanctuaries, helping to make the snorkeling and scuba diving extra special,” Mitchell said.

Morris noted that, while the hurricane damaged many of the reefs, sea life has since returned to Vieques, including at Mosquito Pier, where reefs have formed on the underwater pillars. “It is fantastic and exciting to share the vertical reef that the pier has become with the sea turtle families and family of rays and octopuses that live there,” Morris said.

Vieques’ most famous attraction is Mosquito Bay, a bioluminescent bay on the island’s southern shore — and it lives up to the hype. “From five bio bays in the world, Puerto Rico has three,” Dean said. “Vieques has the brightest bioluminescent bay...and it’s a must-see attraction.” The bioluminescent glow comes from dinoflagellates, or “dinos,” which are microscopic organisms that light up bright blue whenever they come into contact with something else. After Hurricane Maria pushed water out of the bay and destroyed the dinos’ protective mangrove trees, the organisms temporarily dissipated; but they’ve since returned in even greater amounts than before. Visitors can experience the natural wonder for themselves via evening kayak tours — as you dip your paddle, or run your fingers through the water, the dinoflagellates emanate their incredible neon light and then immediately disappear (so quickly it’s nearly impossible to get a photo of them — I tried, failed, then decided it was better to just enjoy it). We moved through the bay in clear kayaks with Taino Aqua Adventures, and there was nothing quite like seeing the thousands of dinos twinkling under our feet — almost as if they were stars — as we moved through the otherwise dark bay.

“Just like in Puerto Rico, Vieques cuisine has the Caribbean flare we all come to love,” Dean said. Mofongo — a savory, plantain-based dish often topped with meat or seafood and sauce, Mitchell explained — is Puerto Rico’s signature dish. It’s on plenty of menus, but perhaps the best place to get it is at the Rincón del Sabor, a food truck that serves “trifongo,” made with sweet plantains, savory plantains and yucca.

If you’re in the mood for a light meal and a tropical cocktail, you can grab a Caribbean Salad at Bananas (a spot that has some markings of a seaside tourist trap but is actually a delicious, tropical eatery); and to challenge your heat tolerance, you can sidle up at Coqui Fire Cafe, an open-air restaurant in the downtown neighborhood of Isabel Segunda, which has a wide range of homemade salsas available to pair with your meal.

For another signature dish, Dean recommended seeking out coconut arepas, a fry bread native to Vieques; I had them in the Arepas y Habichuelas (a red bean dish served with homemade coconut arepas) at El Blok’s restaurant and can attest to the fact that they’re well worth it.

As for drinks, you can get the native Puerto Rican beer Medalla at pretty much any restaurant; and if you’re more of a cocktail person, Dean recommended Bilí. “The [local] drink includes rum infused with fermented quenepas, a small edible tropical fruit that typically ripens during the summer,” he said. “Chilled or with a little ice, Bilí is sweet, light and refreshing.” Try it at the restaurant of the same name, a breezy spot along the Malecón serving creative cocktails like a Passion Fruit Bilí Mojito.

Opportunities to give back

As Gorman noted, Vieques’ post-hurricane recovery is an ongoing process; and there are ways for visitors to give back while there or after returning home. “If you’re concerned about your impact on Vieques while you’re here in post-Maria life, I encourage you to volunteer at one of the many awesome organizations doing great things here,” Gorman said, caveating that they’re “truly okay with you coming and just relaxing on the beach and exploring the island.”

If you can spare time or funds, Dean recommended contributing to organizations like Hope Builders and ViequesLove, both of which “are dedicated to strengthening community life in Vieques,” he said. You can also donate to The Vieques Conservation and Historical Trust, which works to preserve the island’s “environmental, archaeological and cultural resources,” per its website.

Who’s ready to book a seat on a puddle jumper?