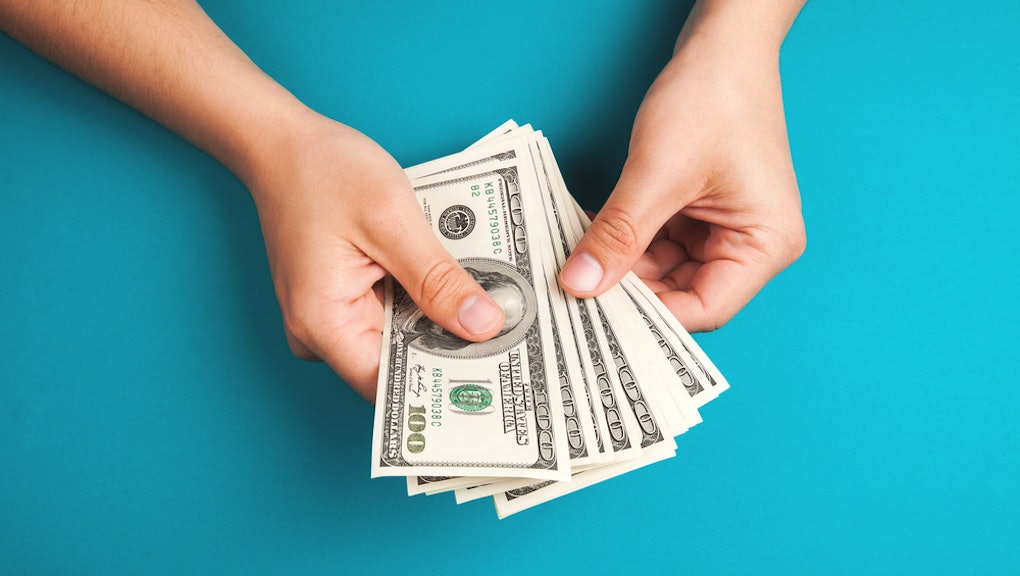 As debit and credit card machines become the norm across cash registers nationwide, and peer-to-peer services like Venmo and Cash App reign supreme as our primary modes of reimbursement, it might seem as though cold hard cash is as useful as Monopoly money. But according to Ash Exantus, director of financial education and financial empowerment coach at BankMobile, “don’t believe the hype. It’s still very important to carry cash with you.”

But a lot of millennials haven’t gotten the memo. Recent research from the U.S. Bank Cash Behavior Survey found that 47 percent of millennial consumers have fallen into the digital-only trap. During the rare instances they do carry cash, half of respondents reported carrying less than $20 on them, with that number consistently dwindling.

As for how much money you should carry — well, that’s largely a personal decision. But Best Life scoured the internet for opinions from everyone from experts to Reddit users, and the common consensus was $200. Why? If your card gets declined at a restaurant, you want to have enough to foot the entire bill. According to Budget Your Trip, it costs an average of $223 to spend a day touring an American city, so $200 feels like a reasonable number as long as you scale back on one or two Starbucks trips.

Here’s why it’s a smart idea to carry cash on you — and enough of it.

In case of emergency

Life always happens when you’re making other plans — and cash is your best friend during those unforeseen circumstances.

“There are many situations in which an emergency happens where you may need cash in order to get out of it,” said Exantus. You never know when you’ll have to pay for a tow truck or a quick emergency cab ride (and you don’t have a second to spare to fiddle with the credit card machine). He said that sometimes you might even need to pay someone in cash for assistance in a variety of predicaments.

Exantus said many smaller merchants try to avoid paying processing fees associated with card machines, so they might be open to giving you a discount if you pay in cash. How to find out if they’d be amenable to cutting you a deal? You’d likely have to approach them yourself. “They probably won’t post it anywhere but you’ll be surprised how much money you can save when you pay for goods with cash,” he said. (Not to mention those times when you throw in extra items at the register to hit the credit minimum.)

What’s more is that a study from the Journal of Consumer Research found that you are inclined to spend more when shopping with a credit card since you aren’t constrained by the limitations of cash and can effectively shop with money you don’t have. If you have a tight budget to stick to, use cash to help you stay within your means.

To leave a tip

It might seem easier to add the tip to your bill while paying on credit or debit, but Exantus said that’s not the best idea, since servers and workers in the hospitality or service industry often rely on immediate tips to live. “Waiters [prefer] cash because they can just take it and put it in their pocket as opposed to having to wait for their establishment to give them their tip in a paycheck at a later time,” he said.

During a blackout or power outage, we rarely think of shopping as the first activity to go off-limits. If all you have is plastic on you, which relies on electricity to process through a card machine, you’re left high and dry without those groceries. “Cash is good as a ‘just in case’ so that if technology is ever an issue, phone lines go out, if there’s a storm or computers go down, you don’t have to forfeit your purchase,” said Exantus.

This article was originally published on March 1, 2019