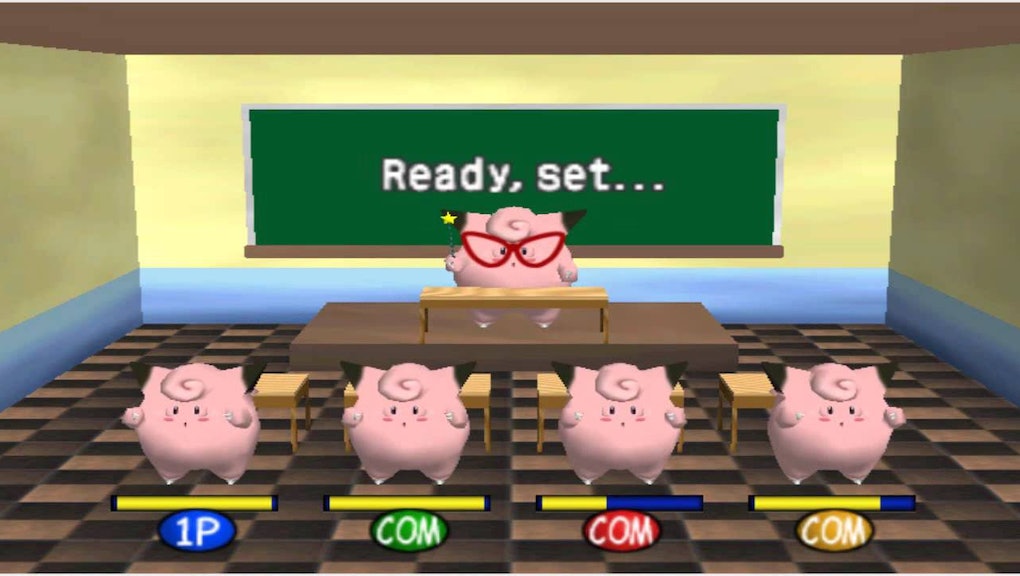 Ranking all 21 ‘Pokémon Stadium’ minigames, from “Snore War” to “Sushi-Go-Round”

Most gamers remember Pokémon Stadium as a colorful collection of knock-down, drag out Pokémon battles. But many also look back fondly on its wide array of challenging and entertaining minigames, ranging from the Clefairy class filled with moves you’d have to mimic to the makeshift Ring Toss challenge with Ekans and Diglett. These activities were some of the best parts of Pokémon Stadium and Pokémon Stadium 2, and this ranking of the 21 Pokémon Stadium minigames will bring you right back to your days playing on that Nintendo 64.

These old games still hold up today as some of the most fun Pokémon minigames that’ve been released throughout the entire series, period. Unfortunately, they’re not available to play online, just on the original console. But in case you are itching to break out your Nintendo 64 soon and immerse yourself in some Poké-goodness, take a look at this ranking before deciding exactly where to start.

As the Pokémon Donphan, players have to take multiple laps around a dirt track, collecting emblems to unleash dirt tornados at nemeses. The first person to cross the finish line emerges victorious. It may sound easy, but it can be seriously frustrating to get around the track when these tornados start swirling around. And of course, that’s exactly what the opponent Donphans wants to happen. You’ll feel like throwing your controller by the end of this game.

As Scyther, Pinsir, or Scizor, players must control Pokémon to cut part of a log. As the log falls further on the screen, you’re challenged to cut the log as close to the line marked on it as possible. The closest player gets 10 points, while other places get fewer points. The winner is crowned after all rounds are complete, for whoever amasses the most points. Sounds easy, right? Nope. It’s a lot harder than it looks, especially if you don’t have the greatest reflexes.

Taking control of Furret or Girafarig, players work to push a Poké ball into a goalpost while keeping others from doing the same. You must hit the ball into additional grid squares, and move your Pokémon to tap it into the goal. There’s 60 seconds on the clock to accomplish this, and whoever scores the most points wins. It’s a madcap game, and it can be difficult to see where your Furret is on the screen, since they all look alike. Could a new version of this game have multicolored Furrets, maybe?

This minigame finds you controlling a paddle powered by Mr. Mime. You must keep Poké Balls from going into your goal area. The game board is cross-shaped, so all players are competing at the same time. The person with the most goals scored wins. While the colorful screen is a nice change of pace, this ultimately isn’t the most inspired minigame, as it’s mostly just a glorified Pong match.

This is a zany obstacle course that you can play in as either Togepi or Omanyte. Throughout the course, some targets need to be hit and others avoided. Grass slows you down, while Digletts can appear and block your progress. The person to reach the goal quickest wins. Togepi is cute and all, but an obstacle course isn’t the best game for a Pokémon that’s essentially a broken egg. It’s pretty frustrating as well, especially when Digletts pop up to keep you from your goal.

All players control an adorable Eevee as it runs around a circular area, kind of like a cake walk. At random intervals, an Aipom lifts up the middle dish, which reveals a fruit. The first person to dash for the fruit and obtain it wins the round. It’s not an amazing game, but it’s still quite entertaining to fake other players out by attempting to make a dash for the fruit, only to have them actually go for it while you were just pretending.

As Chansey, you’ve got to collect various eggs that drop down from the top of the stage. There are 100 eggs that eventually drop, with Chansey being forced to lean in multiple directions to catch them; the Chansey with the most eggs collected wins. Beware of Voltorbs that drop at random, though! This is a fun, simple game that tests your reaction skills, and you don’t need any practice to jump right in and totally trounce the competition.

All players take on the role of Delibirds in a factory where gifts begin piling up at the bottom of the screen. Delibird must collect the gifts and place them in its sack, then “deliver” them at the top of the screen to score points. Only five gifts can be carried at a time. The Delibird with the most points wins. This is a nostalgic minigame that’s reminiscent of some of the playground games you probably used to play in school as a kid, like grabbing a ton of water balloons and carrying them to the finish. It’s also one of the only games to feature Delibird, which is a rare treat.

Players use Hitmontop to knock various opponents out of the ring using the “Rapid Spin” move. Each Hitmontop bumps into each other at certain points, which can make sending opponents flying. The last Hitmontop remaining wins. This game is similar in scope to a Mario Party minigame that finds dizzy Mario characters trying not to fall off of a record, and it has similar vibes – especially if you want to be mean and harass your friends to secure a victory.

This minigame features Golbat, who’s in a dark cave with three others. Each Golbat must fly to the end of the cave with the most hearts intact by the end of the round, avoiding Magnemite and running into the other Golbats along the way. You’ll love speeding through the dark cave to the finish line, as Golbat is simple to control and the race is over in a flash. Plus, you don’t have to actually face Golbat or Zubat in a battle, and that’s a reprieve to be thankful for.

Trainers play as little Sandshrew, who’s tasked with digging underground as quickly as possible before the other players by alternating between the controller’s shoulder buttons. The first to reach the underground area wins. If you’re skilled at tapping buttons repeatedly (which older games probably prepared you for) you’ll excel at this simple minigame.

Players take turns tossing Ekans around Diglett like a Pokémon-centric version of Ring Toss. Gold Diglett earn extra points. The player with the most points after 60 seconds wins. It’s a glorified, adorable version of Ring Toss, except you’re using Ekans. You’ll wish you had a downsized version of this game to take with you on your phone.

Lickitung is hungry, so players have to help it snag as many plates of food as possible from the circulating table of plates. Some are more expensive than others, so you’ve got to aim to rack up the most expensive bill possible to win. But watch out, the spicy foods slow poor Lickitung down. This game would make an excellent mobile app, because it’s so satisfying to stretch Lickitung’s prehensile tongue out to snatch dishes before your opponents.

Players are randomly assigned either Metapod or Kakuna, each using the move “Harden” at the perfect time to avoid taking damage from rocks being thrown at them. The move takes away stamina, but being pelted with rocks does, too. The last player standing wins the match. It’s a great way to test your Pokémon’s limits and skills (and to finally use “Harden” outside of battle).

As one of four Drowzees, players have to use the Pokémon’s Hypnosis attack as the pendulum swinging across the screen hits the center. Otherwise, they’ll start to fall asleep. The player who stays awake the longest wins. You’ll be reminded of doing your best to keep your eyes open during a late-night Netflix marathon after work, one of the many reasons to love this silly little game.

Multiple Pokémon walk out on-screen. You have to count each one by pressing the A button, but watch out – it can be quite difficult to keep up. The easy part, though, is that the player who’s counted the correct amount by the end wins, and watching all the monsters parade out in front of you is quite a spectacle.

As either Pikachu or Pichu, players must use different lamps on-screen to charge up while aiming at an electrode and pressing the corresponding button over and over to charge. The first player to be fully charged wins. Watching four Pikachu or Pichu working to juice up an electrode is actually pretty mesmerizing, and the charge-up process is enjoyable, too. Plus, with segmented sections for all players, there’s no confusion here.

Four Rattata are racing on treadmills, with plenty of jumps placed along the track. Whichever Rattata reaches first place wins the race. Rattata are some of the cutest Pokémon you can get while starting out as a Trainer, and watching them in little miniature obstacle courses like tiny horses is fascinating, to say the least. You’ll love controlling them, too.

Four Magikarp are flopping around on land. You must compete with the other Magikarp to see who can flop the highest as time runs out to win. Typically, all a poor little Magikarp can do is splash, and while it’s no help during battle, it’s actually a blast to see how high you can get one to flop here, because it’s so absurd.

As either Pikachu or Voltorb, players have to charge up a machine with electricity by pressing the button on the Nintendo 64 controller that matches the colored light on the machine. Whoever fills up the machine first wins. If you’re a fan of watching Pikachu totally demolish its enemies in the anime, this is a good analogue for doing that, but it’s a great game to play regardless of your anime knowledge.

Clefairy’s the teacher and you’re the student in this adorable take on “Simon Says”. Clefairy “writes” a series of arrows and button presses on the chalkboard, and you’ve got to repeat them back. The Clefairy who pays attention the best wins the match. This minigame ranks #1 on this list mainly because of those fabulous glasses on the main Clefairy, but also because of how fun it is to repeat the directions. You can sharpen your memorization skills while watching an impossibly adorable “classroom” of Clefairy. And what’s better than that, truly?