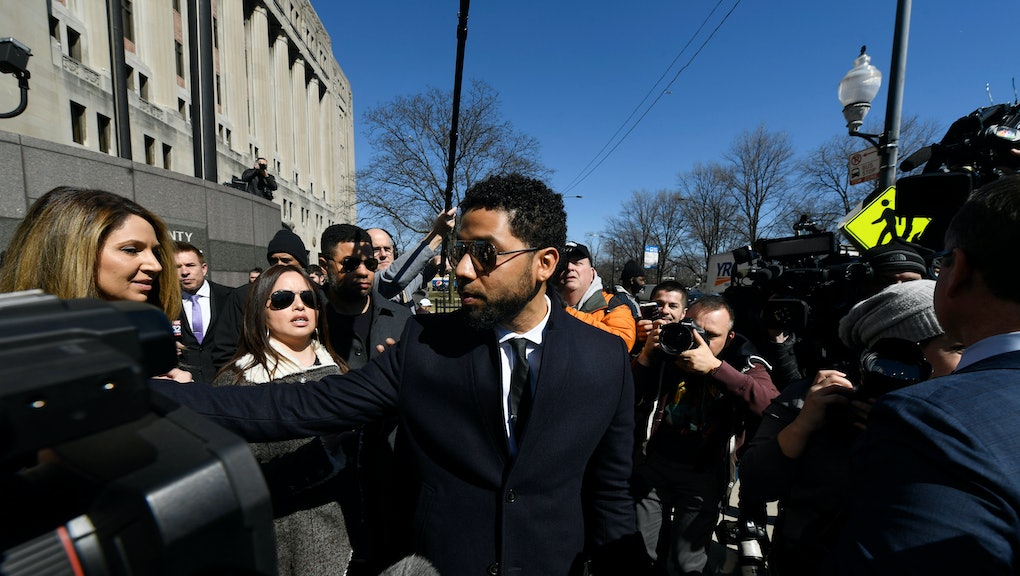 Op-ed: Why I refuse to accept the Chicago Police Department’s story about Jussie Smollett

The dropping of charges against Jussie Smollett has been variously described as bizarre, shocking and a dramatic turn of events.

But what really should be shocking is how the Chicago Police Department (CPD) and the mainstream media closed the case against Smollett, a black gay man and the star of the Fox show “Empire,” before he ever had his day in court.

As is now well-known, Smollett was accused by the CPD of organizing and paying for an assault and battery against himself. Before completing what was supposed to be a thorough investigation, the CPD leaked its alleged evidence to establish Smollett’s guilt in the public eye. Smollett was not simply accused, he was also judged guilty by innuendo by CPD Superintendent Eddie Johnson. Smollett’s motive, according to the CPD, was to boost his salary and hold onto his job.

After reading the 22 pages of investigative files released by the CPD, I believe the evidence presented revealed nothing new; this was information that had largely already been leaked to the press. In fact, Smollett’s case is still being tried in the media, even though Cook County prosecutors have dropped charges against the actor.

The CPD, Chicago Mayor Rahm Emanuel and the media have denied Smollett the presumption of innocence; the fact that he continues to maintain his innocence, and that his guilt has not been proven as is required by law, has been swept aside.

What are the facts that are actually known? Superintendent Johnson initially claimed that Smollett was motivated by salary negotiations. However, there were no plans for negotiations regarding Smollett’s salary and Smollett has not raised this issue with Fox executives.

Johnson then changed the CPD’s story to say that Smollett was motivated by a desire to bring attention to himself as a victim of a racist and homophobic attack because he was about to be dropped from his show. But both Fox executives and the show’s writers have publicly denied that claim.

There are also a number of other discrepancies in the CPD’s story about Smollett:

1. Johnson showed the media a threatening letter that Smollett had given the CPD, and then declared that the actor had written the letter himself. However, the FBI, which has now entered the investigation, then released a statement criticizing Johnson for reaching that conclusion without corroborating evidence.

Given these discrepancies, it has been troubling to see the near-unquestioning acceptance of the CPD’s story about what happened to Smollett, by the media and even by black and gay activists. The CPD has a troubling record, including the well-documented attempt to cover-up the murder of Laquan McDonald, so why are we willing to accept their story about Smollett?

Moreover, the recent public display of righteous indignation on the part of Mayor Emanuel and Johnson notwithstanding, those of us from the black and brown communities of Chicago know that the intensity and volume of resources committed to the Smollett investigation is not what we typically see. How can the commitment of such enormous resources to investigate a nonviolent, low-level felony be justified?

The importance of this case to our movement for real police accountability can hardly be overstated. Now that President Donald Trump has promised a federal review of Smollett’s case, we know that he is likely to side with the police no matter what the outcome. Long before Smollett’s case, we’ve learned time and time again that black, brown and LGBTQ people are far too often presumed guilty by our criminal justice system in the United States.

That is why we cannot accept the word of the corrupt and racist criminal justice system that exists in Chicago at face value.

Frank Chapman was wrongfully convicted of murder and armed robbery in 1961 and sentenced to life and 50 years in the Missouri State Prison. His case was taken up by the National Alliance Against Racist and Political Repression in 1973, and in 1976 he was released. He had been incarcerated for 14 years. In 1983 he was elected Executive Director of NAARPR. He worked with Charlene Mitchell, who preceded him as Executive Director of NAARPR, on building an international campaign to free Rev. Ben Chavis, Joann Little, and others falsely accused and politically persecuted. He was a part of the international campaign to free Nelson Mandela. For the past three years, he has helped lead the struggle in Chicago to stop police crimes, especially murder, torture, beatings and racial profiling. He is presently Field Organizer and Educational Director of the Chicago Alliance Against Racist and Political Repression. Frank is also a published writer. He became a contributing editor of Freedomways magazine in 1981-83.