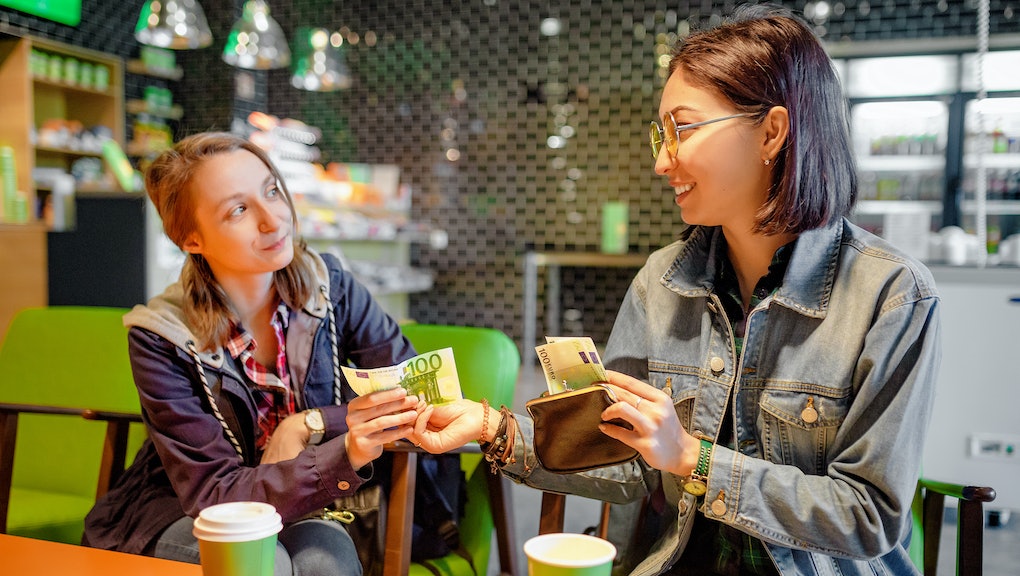 How to deal with that friend that says they’ll Venmo you, but never does

Lending your friend money when they’re in a bind is the noble thing to do. After all, you’d hate seeing them suffer, and want to guarantee you’ll have that same support should you find yourself in a similar situation. And while lending money to friends is far from unusual — how many times have you covered a friend’s tab at the bar when they ran out of cash? — it can wreak major havoc on your relationship. A recent Bank of America study found that 43 percent of respondents would consider ending a friendship if they weren’t paid back — with a third of respondents willing to cut ties over a missing loan as low as $100.

Money lending among friends isn’t going away any time soon, with peer-to-peer mobile apps like Venmo facilitating financial exchanges in a way that reduces in-person awkwardness, the study found. But navigating those murky waters can be super uncomfortable. Here’s how to deal when you find yourself always bailing your friend out of a sticky situation, and they never pay you back.

Naturally, some friendships fall into a routine where you’re continuously buying each other that same $4.13 cup of coffee every week until you die. But for group dinners and hang outs with friends you don’t see too often, things can get pretty hectic and tense once the actual check arrives.

Many bars and restaurants won’t split the tab per customer, so it’s often far easier for you to throw down your credit card and cover the whole thing. The expectation is that your friends will all immediately send a Venmo covering their share. But just as often, Oh, we’ll get you back next time, they’ll say. Don’t worry, I’ll send you that transfer when we get in the cab. Obviously, that money never comes. Before you know it, you’ve accumulated hundreds of dollars in bills.

To avoid that situation entirely, towards the end of dinner — or before you grab that coffee — ask if everyone has enough cash on hand since you only budgeted for your share. This will set the tone to suggest you are in no position to cover everyone or wait an extended amount of time to get a reimbursement.

But if they don’t get the memo, and you’re left waiting for a reimbursement. Nudge them gently after you’ve paid and say any of the following:

-If you could all Venmo me back at your earliest convenience, that would be great.

-What’s the easiest way for all of you to pay me back?

-Let me know how you want to split this bill.

If asking for your money right then and there yields no results, go a step further by asking everyone to download an app like Splitwise. It keeps a running total of what each person has paid for, which allows everybody to pay their share all at once, instead of, say, $4 increments. You can also use it to easily split the bill right then and there so there’s no waiting on your money.

If you’re still met with resistance, have a serious face-to-face with your friend. They might be going through some financial difficulties, in which case, you’ll want to either: a) give them a little more leeway for the time being, b) opt out of any get-togethers with them until they can pay their share or find free/cheaper activities, or c) offer your (non-monetary) help in dealing with their issue, whether that’s by pointing them in the direction of a certified financial planner in their area who can help them create a plan or offering assistance in other areas.

Get it in writing

For more substantial loans — say, money that could really impact your ability to stay afloat that week or month — It’s important to lay out your expectations for reimbursement in writing. According to the American Bar Association, an agreement, whether written or oral, is considered legally valid if one party makes an offer of value (usually monetary) and the other party accepts it. While you can easily set these terms in person or over the phone, you want a paper trail over email to fall back on should you need to dig up proof.

“The amount of time you should wait to say something or remind them that they owe you money depends on the agreement that was made when the money was lent,” said Ash Exantus, director of financial education and financial empowerment coach at BankMobile.

“It should be explicit that you are lending money to your friend and are expecting it back. If your friend says ‘Lend me $1,000 and I’ll give it back to you next week,’ then I would follow up next week, and so on and so forth. If no time is given before lending money, I would ask upfront, ‘When should I expect this back?’ and then ask when that time is up.”

Why you’re lending the money in the first place sometimes takes precedence over the money itself. According to a ConsumerCredit.com survey, two thirds of respondents say they would be more inclined to lend someone money in the event of the death of a loved one or natural disaster. You might choose to be a lot more lenient with the terms of the loan in a dire case than if the money were to go towards, say, a new wardrobe or concert tickets.

According to that same Bank of America survey, 90 percent of people find it awkward to ask for money, so do your best to acknowledge their sense of vulnerability.

If you ever decide to seek legal action, evaluate what this friendship means to you, as you will essentially terminate the relationship. Keep in mind that the legal fees might even outweigh the money you’re owed.

If they can’t pay you the lump sum at once, offer to set up an installment plan.

“If that is agreed-upon I would have them set it up in an automatic fashion so that no excuses can come up later on,” said Exantus. Beyond Venmo, you can also set up installments by having them head to the e-transfer tab on their mobile banking app, and set up fixed automatic payments for a set number of weeks or months until the money is paid in full.

Receiving a loan from a bank comes with interest, and in some cases, a loan between friends is no different. “If this is just an acquaintance that you wanted to help out, then after six months I would start the discussion around charging interest for the delay in payment,” said Exantus. However, if you’re dealing with a close friend in a true emergency, have enough compassion to avoid tacking on extra fees, though do follow up on your request.

The damage is already done, but it’s in your power to prevent further issues from arising. “The best way to prevent losing money to friends in the future is to not lend it,” said Exantus. “If your friend is in a jam and you have it to spare, then help your friend. But, if you need that money, do not lend it to them.”

Before you lend to a friend again, Exantus said you should have “all your financial affairs in order.” What that looks like is at least three to six months of expenses saved, with little to no debt.

This article was originally published on April 10, 2019