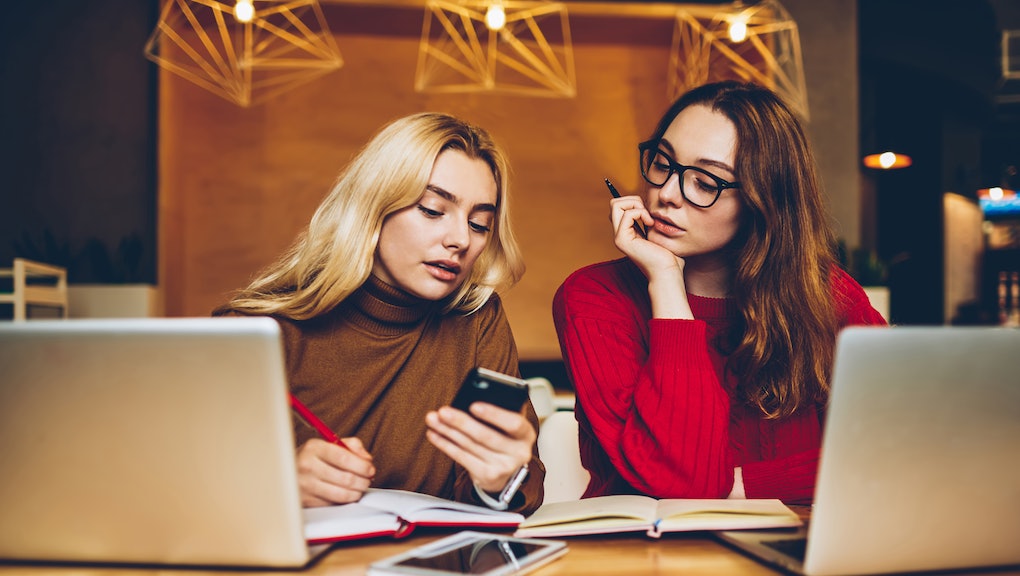 It infuriates me to my core that my best friend receives approximately $10,000 less than her male colleague in a similar role with the same amount of experience. And she’s not an outlier: the U.S. Census Bureau revealed women make an average of 81 cents for every man’s dollar. It’s a sickening statistic thrown around so frequently it’s seen as normal. But what we often don’t talk about are wage gaps among coworkers regardless of gender.

If you don’t know how much your coworker makes, it might be time to ask. Money is an uncomfortable topic, but the more we talk about it, the more the stigma erodes. Salary transparency also prevents companies from perpetuating shady and unfair pay practices, gendered and otherwise.

If you find out your coworker makes more than you, here’s how to use that to your advantage — without, of course, throwing them under the bus.

If you’re trying to leverage your own salary with that of your coworker’s, you can’t invent a number out of thin air. Start a dialogue with a trusted colleague, but go slow. They’ll undoubtedly feel blindsided if you ambush them with the million-dollar (or, say, $50,000) question.

“I’d let them know that you’re in the process of doing some salary research and would love to discuss this with them. If they agree, you can discuss their role and major projects and responsibilities and then ask them what their salary is,” said Lauren McGoodwin, CEO and founder of Career Contessa, creator of The Salary Project and host of The Femails podcast.

In return, share your information. As per McGoodwin’s recommendation, end the conversation with: “Based on what I’ve shared and what you’re making, do you agree that I should continue to research this more?”

Given this new information, you might be feeling a little frustrated. Take at least a few days to process and absorb the conversation with your colleague. Sure, they might make more than you with the same amount of experience, but you don’t usually know that for sure (unless you’ve shadowed them consistently since they set foot on their college campus). You may have no idea what kind of in-demand skills they have, what sort of prestigious accolades they’ve received, or how they’ve specifically impressed your boss over the course of their employment. Once you do learn of their higher salary, it’s insulting and highly inappropriate to question why and how they earned it.

But say you do have a pretty solid picture of their background — use that as ammo to brush up on your own skills. The Society For Human Resource Management found that almost half of employers offer assistance or reimbursement for undergraduate or graduate degrees. Take advantage of any ongoing training or education to position yourself as an equally valuable employee.

Don’t name your colleagues in negotiations

Once you’re calm, schedule a meeting with your boss, taking care to avoid pitting yourself against your colleague to prove you’re worthy of a raise. Initially leave out your colleague entirely from the equation. This isn’t about them. It’s about you. Then, ask exactly what you need to do professionally to merit that salary, and be ready to implement those strategies ASAP.

“If [your boss says] that range is out of the question, then you might mention that you’re aware that other coworkers are in this range and you’d like to know how your role differs from theirs,” she said.

When I asked my best friend how she’d approach the wage gap between her and her male colleague in a meeting with her boss, she said she didn’t want to “bring attention to him and the fact that he’s male and maybe reinforce preconceived notions that he’s better qualified because of his gender.”

And according to McGoodwin, this is definitely the right way to go about it, adding that you should never use your coworker’s identity or their salary in a formal performance review as a springboard for your own raise. “Raises are based on performance, value added and future results. Raises are not given so you can match your coworker’s,” she said.

Do note, though, that paying an employee less for the same work as their colleague violates the Equal Pay Act of 1963, unless the employer can prove the higher salary is based on merit. If you do suspect discrimination or institutional bias at play in why a coworker is paid more than you, and you’re not satisfied with how your direct manager handled the conversation, meet with HR. You can also a file an official complaint with the U.S. Equal Employment Opportunity Commission. To find a labor and employment lawyer in your area, visit HG.org.

Look for a new job

If you’ve already had the tough conversations with your boss and HR department, and still feel you aren’t being compensated fairly, McGoodwin said those are completely reasonable grounds to start looking elsewhere. Use a tool like Glassdoor’s Know Your Worth to determine the market salary for a professional of your caliber and field, and use that number to better advocate for yourself in a new — hopefully more profitable — position.

This article was originally published on April 24, 2019