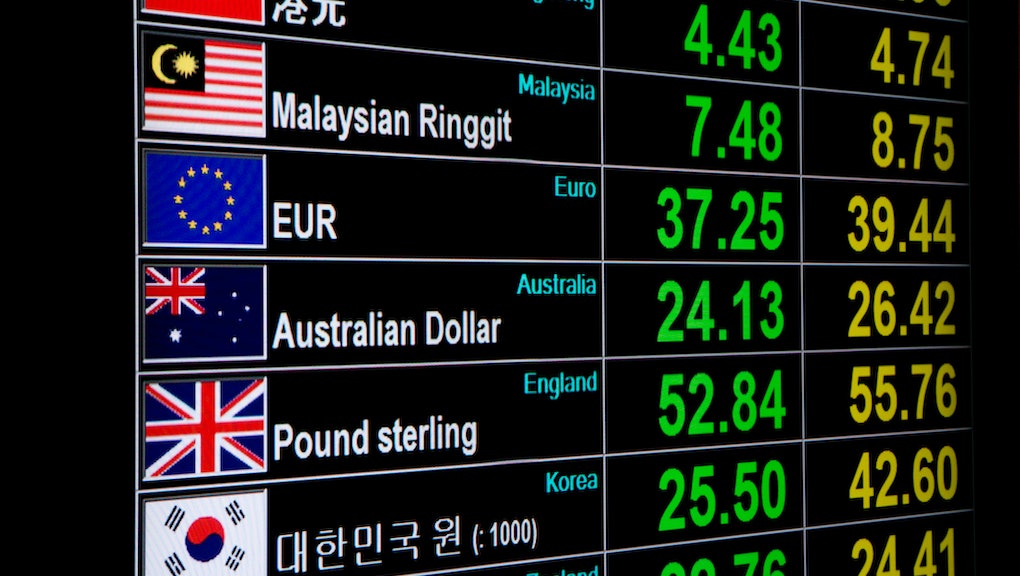 Stop exchanging your currency at the airport

When budgeting for an upcoming trip, there’s one cost that’s easy to overlook: The cost of exchanging your money for a foreign currency. As Sara Rathner, NerdWallet’s travel expert, explained, there are several ways to exchange money — such as through a bank or credit union, dedicated currency exchange kiosks and even websites that sell foreign currency — and each one is going to charge you to do so, whether through inflated exchange rates, transaction fees or both. But how much you pay can vary significantly depending on which route you take.

“It’s difficult to find the best rate while abroad, but to ensure you get the most on your exchange, you should first check what the official exchange rate is,” said WalletHub analyst Jill Gonzalez. (You can see daily exchange rates on websites like XE and Oanda.) Then, she added, “compare that to whatever banks or exchange kiosks are offering, and aim for the smallest difference between rates.” Beyond your initial research, there are a few key strategies to make sure you’re paying as little as possible in currency exchange rates and fees.

Go for banks and credit unions over currency exchange kiosks

Getting cash at an airport, hotel or other dedicated currency exchange kiosk may be convenient; but that convenience comes at a price. “Currency exchanges at airports and in tourist areas offer less competitive rates and higher fees,” Rathner said. “These should only be used as a last resort.”

Instead, opt for a bank or credit union, which Rathner said typically “offer the lowest fees.” She noted that some charge outright fees, while others profit by charging a slightly higher exchange rate. The fees and rates vary among these businesses, too. “You can shop around and order currency from the bank that has the best rate, but keep in mind that rates change daily,” Rathner said.

Get cash from an ATM

Beyond the cost benefits, Rathner pointed out that ATMs are usually easier to find than currency exchanges; and taking this route “allows you to limit your withdrawals to just the amount you need, rather than a larger amount just in case.”

Pay for as much as possible with a credit card

There are plenty of destinations where you don’t need much cash at all; in which case, your best bet is to pay for things with a credit card (even better if it has no foreign transaction fees). According to a WalletHub currency exchange study, the average exchange rate charged by Travelex (a popular currency exchange company) can be up to 7.6% higher than the rate charged when you pay with a credit card. “Paying with credit cards makes a huge difference,” Gonzalez said. “It gives you the best exchange rate, and it provides a $0 liability guarantee for unauthorized transactions, should the card be lost or stolen.” Plus, she added, “it...saves you time, and it’s less risky than carrying cash around.”

Rathner recommends traveling with two credit cards if you can, so that you have a back-up. “Visas and Mastercards are widely accepted around the world,” she said. “Notify your credit card companies of your upcoming travel so they won’t think your charges are fraudulent. You can often do this online by logging into your credit card account.”

But before you rely on credit or debit cards, “you also have to consider the destination and whether it’s plastic-friendly,” Rathner said. “You may need foreign cash for a cab or another expense once you arrive. If you do get foreign currency ahead of your trip, only carry enough to get by. Otherwise, you could risk having it lost or stolen.”

Pay for purchases in the local currency

When you pay with a credit card or debit card, or take money out of an ATM, in a foreign country, you could encounter something called dynamic currency conversion. “Some ATMs or merchants may offer to do the math and convert transactions into U.S. dollars in exchange for a fee,” Rathner said. “To avoid the extra cost, you can simply decline the offer.”

Try to only exchange as much as you need

If you get more foreign cash than you need or use on your trip, you’ll end up paying again to exchange what’s left back to your own currency. Rathner recommends coming up with a daily budget to estimate how much cash you’ll need. And, particularly if you’re traveling somewhere that’s plastic-friendly, be conservative in how much money you change or withdraw from an ATM to avoid that possibility. “I try not to exchange currency back into U.S. dollars if I can help it,” Rathner said. “Usually I only have a small amount left and may lose value in the re-exchange (plus, it’s extra effort). I’ve had success using up the last of my cash paying off part of the remaining balance at my hotel. I’ve also used it at bars [and] restaurants with the server’s blessing. When you ask nicely and explain that you’re going home the next day, they may be happy to let you pay part of your bill in cash and cover the rest with a credit card.”