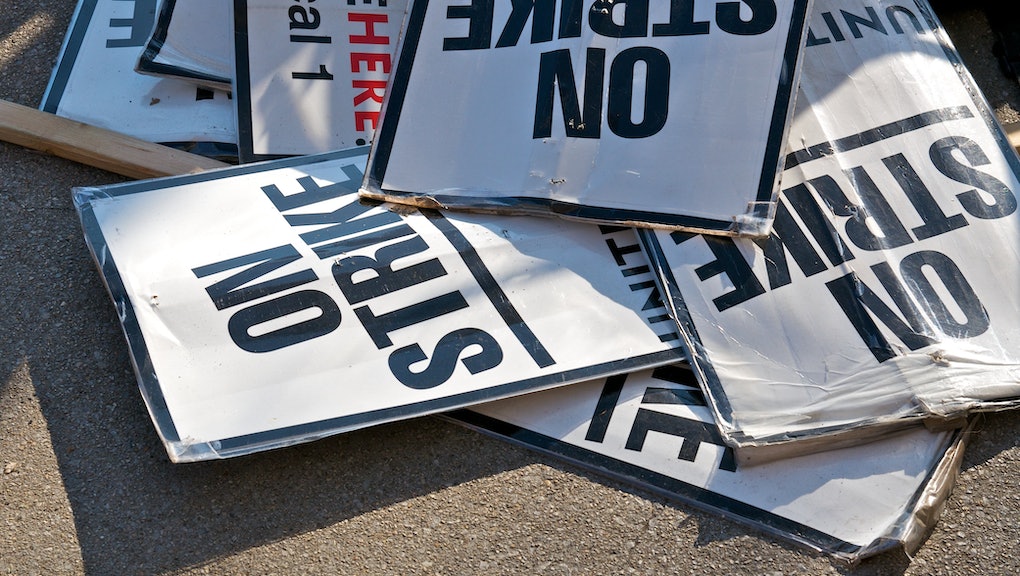 At a supermarket near my home the workers are on strike. “Don’t shop Key Food,” they call out, as passersby look on, some taking the printed fliers the striking employees of said store are passing out. The paper one-sheets list the reasons the employees are outside with sandwich boards folded across their bodies, everything from lack of healthcare to living wages, and urge neighbors to call the store’s corporate headquarters and demand a fair union contract for the workers. Some potential grocery shoppers are deterred from entering the store (there are several similar supermarkets just blocks away), while others ignore the protestors, entering through the automatic doors.

In late afternoon, two men exit the store, holding plastic bags presumably full of sandwiches, chips and a beverage. A striker pleads with them to stop supporting the grocery store until the worker’s contract demands are met. “But we needed lunch,” one of the men protests, waving his bag. The smells of Taco Bell and a falafel cart waver in the distance. The striking employee tries to politely explain what the lunch these two men chose to purchase signifies, and how yes, we all need lunch, but should also be entitled to a living wage, fair benefits and compensation.

The practice of striking as we know it dates back to ancient Egypt, when builders banded together to protest Ramesses III’s unfair treatment and demand better conditions and payment. More modernized labor unions started in the late 19th Century, following the Industrial Revolution, a time when employers became significantly more detached from their workers, increasingly viewing laborers as disposable rather than valuable assets at any level. Unions representing a variety of industries, from food to shipping to acting and other creative careers began to form, allowing workers from various companies within the same industry to band together and negotiate for better labor standards.

Now, strikes take place across America, outside of grocery stores and school districts, writers’ rooms and berry farms. A strike, which implies that workers are not reporting to work until their demands are met or negotiated, is different from a boycott, in that a boycott is supported by community members and consumers, who can refuse to purchase goods or services from the company the workers are striking.

Even if you’re not an employee or union member of a specific corporation, spending money at the business while workers are on strike if considered crossing a picket line. Here’s what that means:

“Crossing a picket line to buy groceries at Stop & Shop [for example], while workers are on strike indicates that you’re okay with those workers not being able to afford to feed their families. It indicates that you’re okay with corporations mistreating regular people, and that you’re okay with the inexcusable level of income inequality in this country,” says Alesa Mackool, president of ACM Strategies, a firm that specializes in digital strategy and communications, particularly for labor unions and other pro-worker organizations. “When you see workers picketing, you should recognize that something is very, very wrong and do what you can to become informed.”

First off, you can speak to workers on strike to hear their side of the story first hand — have their wages not been raised in year or are their healthcare policies being taken away? If you support the reasons the workers are requesting their employer treat them a certain way, not crossing the picket line is a way to vote with your dollar. “Consumers have an incredible amount of power,” Mackool says. “It’s one thing for a corporation to ignore the demands of workers, but that becomes a lot harder when the corporation’s bottom line starts hurting because community members take their dollars elsewhere.”

In addition to not crossing a picket line, consumers can directly contact a corporation, as a customer, and state support for its workers. “If we want to preserve good, middle-class jobs in this country, we have to be in this together,” Mackool says.

So why would someone cross a picket line deliberately? It often comes down to a matter of convenience, lack of support or a dire situation. “Strikes, by design, are disruptive and inconvenient to entire communities. Generally speaking, there’s no good reason to cross a picket line outside a real life-or-death emergency,” Mackool says. “Crossing a picket line undermines the striking workers’ ability to negotiate a fair deal.” And if you accidentally cross a picket line? Mackool recommends apologizing to the workers and considering contributing to a workers’ strike fund.

Unionizing and striking are one of few ways workers can use their collective power to bargain and negotiate with their bosses (or, realistically their boss’s boss’s boss, a president, CEO or owner of a company). ”Striking is one of the few ways workers can push back against wealthy, powerful interests and a system that disadvantages ordinary people,” Mackool says, “These workers and their families are disrupting their daily lives and giving up their financial security in order to say their work and contract conditions are no longer tolerable. It’s not a decision any union or worker takes lightly.”