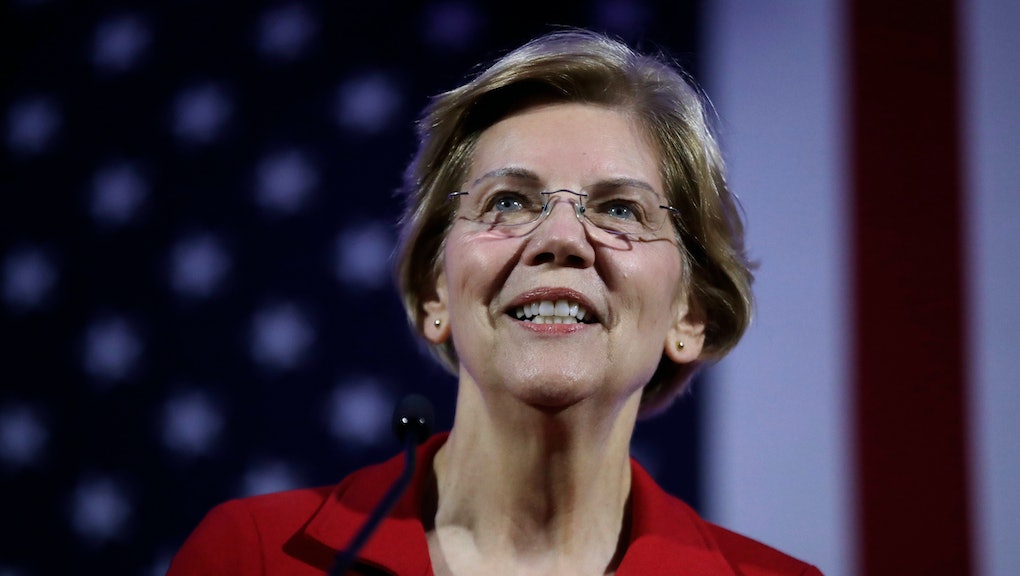 As of 2018, almost 45 million Americans owed an estimated $1.5 trillion in student loan debt — and Elizabeth Warren has a plan to provide financial relief to 95% of them. It’s all part of a comprehensive higher education proposal the Democratic presidential candidate and current Massachusetts senator announced on Monday, April 22 — ahead of a youth-focused town hall — which includes loan forgiveness, tuition-free college, and expanded funding for low-income and minority students and schools.

“Higher education opened a million doors for me,” Warren wrote in a Medium post detailing her plan. “It’s how the daughter of a janitor in a small town in Oklahoma got to become a teacher, a law school professor, a U.S. Senator, and eventually, a candidate for President of the United States. Today, it’s virtually impossible for a young person to find that kind of opportunity.” Calling out the rising costs and lack of government funding in college, Warren presented a multi-faceted approach to wiping out mounds of student debt borrowers currently face and changing the system that led to that debt in the first place.

To keep debt from building up, Warren also wants to implement a “Universal Free College” program, eliminating tuition and fees at all public two- and four-year colleges in America. “College shouldn’t just be a privilege for those who can afford to take on the significant expenses associated with higher education,” Warren wrote on Medium. “Like K-12 education, college is a basic need that should be available for free to everyone who wants to go.”

To help lower-income students cover the costs of school (like housing and books) she wants to invest an additional $100 billion over 10 years into the existing Pell Grant program, which provides financial aid that doesn’t need to be paid back. “It’s not just paying the tuition,” Warren told CNN. “It’s how they pay for books. It’s how they pay for the expenses of having a baby taken care of if they already have a child at home or being able to cover commuting expenses or maybe it’s a chance to live in a dorm and have the kind of college experience that other kids can.”

The senator’s plan also includes several measures targeting the income and racial inequality that keeps low-income and minority students out of higher education or in debt. “For decades, Black Americans were kept out of higher education by virtue of overtly discriminatory policies,” she wrote. “Even as the civil rights movement rolled back racially discriminatory admissions policies, the stratification of our higher education system kept students of color concentrated in under-resourced institutions and left them vulnerable to predatory actors. Black and Latinx students are underrepresented in four-year public colleges and overrepresented in community colleges and for-profit colleges.” To address these issues, Warren is proposing a fund for Historically Black Colleges and Universities (HBCUs) and Minority-Serving Institutions (MSIs); additional federal funding for states that demonstrate substantial improvements in enrollment and graduation rates for lower-income and minority students; a ban on for-profit colleges receiving federal funding; and a rule prohibiting public schools from considering citizenship status or criminal history in admissions decisions.

All in all, Warren’s proposal is estimated to cost approximately $1.25 trillion over 10 years — a price she says the government can cover with her proposed Ultra-Millionaire Tax. The so-called “wealth tax” would apply a 2% tax on Americans whose net worth is more than $50 million, and a 3% tax on those whose net worth is more than $1 billion. In fact, Warren is confident the revenue from that tax could cover much more than her higher education proposal. “For two cents on the dollar, we could pay for universal child care, universal pre-K, universal college and knock back the student loan debt burden for about 43 million Americans and still have nearly, just short, of $1 trillion leftover,” she told CNN. “It tells you how badly out of whack our economy is right now.”

While many of Warren’s Democratic primary opponents — including senators Bernie Sanders, Kamala Harris, and Cory Booker — have also proposed plans or expressed support for tuition-free public college and loan reform, NPR noted that Warren’s proposal is the most extensive in the way of debt-relief. Fellow candidates Minnesota senator Amy Klobuchar and Indiana mayor Pete Buttigieg — both of whom will appear alongside Warren, Sanders, and Harris at the April 22 town hall — have spoken out against tuition-free college.

The issue isn’t a new one for Warren, who has been championing solutions to end student debt for years; and her work and new proposal have gained the support of groups like the American Federal of Teachers (AFT). “Going to college shouldn’t result in a lifetime sentence of student debt, but that is exactly what is happening and it’s only getting worse,” AFT president Randi Weingarten said in a statement. “Sen. Warren’s plan would release Americans from their debt sentence so they can live their lives, care for their families and have a fair shot at the American dream.”