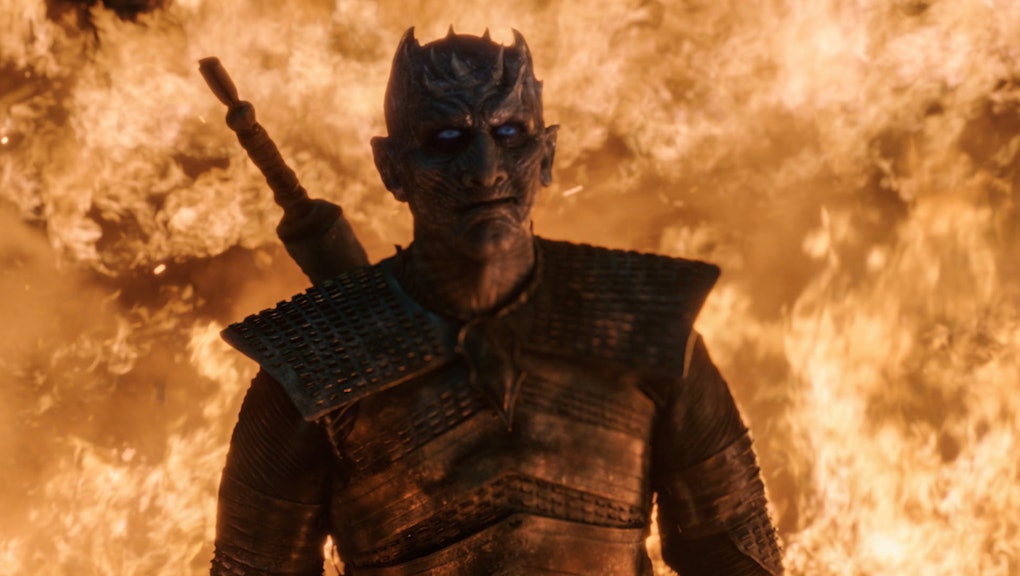 Warning: This post contains multiple spoilers for the third episode of Season 8 of Game of Thrones.

The Battle of Winterfell finally happened in the latest episode of Game of Thrones, and viewers can’t quite get over what they saw unfold onscreen on Sunday night (April 28). As the White Walkers clashed with all of the show’s most important characters, some of the central cast was lost, the Night King was vanquished, and we figured out the possible next target for Arya’s wrath.

It’s a veritable free-for-all in Game of Thrones right now, and there are only three episodes left until the series comes to a close. But with all the chaos taking place, there are likely a few pivotal pieces of information you might have missed. If you were too preoccupied with whether or not your fave was about to bit the dust, this list of things you may have glossed over should help get you on track.

Arya could be the Prince That Was Promised

The mystical Melisandre has been a difficult character to pin down throughout the entirety of the series, but her reappearance on the show in Season 8 was symbolic in an important way. If you’ve been watching the show from the very beginning or have been reading the novels, you’re likely aware of her “Prince That Was Promised” prophecy, which tells of a savior who will save those still living from a telltale “Long Night.” As Vox points out, we just had the “Long Night” (that was the name of the episode, after all) and the savior should have appeared - the reincarnation of the hero Azor Ahai.

Except there’s one important wrinkle in that prophecy: Arya was the one to fell the Night King. Is it possible that Azor Ahai could be the fabled Prince That Was Promised after all this time? Obviously Arya wouldn’t be called a prince – she’s a princess – but her “many faces” talent, the way she previously dressed as a boy not to arouse suspicion in earlier episodes of the series, and the fact that she has been a central figure in the story make us wonder...did Melisandre’s prophecy end up coming true after all?

Cersei could be the next character to fall

In Season 3, as Harper’s Bazaar reminds us, Melisandre had a brief meeting with Arya, in which she foretells Arya “shutting” brown eyes, blue eyes, and green eyes “forever.”

“I see a darkness in you. And in that darkness, eyes staring back at me. Brown eyes, blue eyes, green eyes. Eyes you’ll shut forever. We will meet again,” she told Arya. Of course, it didn’t make sense at the time. But Arya has killed many since then, as we know now. Melisandre returned in Season 8, Episode 3 with a reprisal of the phrase. Arya notes that Melisandre was indeed right.

We can deduce that the blue eyes likely mean the Night King, who has blue eyes. Brown eyes could, of course, be applicable to a wide variety of characters, including Walder Frey, but as far as green eyes go, Cersei Lannister is the obvious choice here. Cersei has been shown to have green eyes in both the Game of Thrones series and the A Song of Ice and Fire book series. Plus, Arya has had it out for Cersei since the beginning of the show ever since Cersei got Arya’s father Ned Stark imprisoned, and ultimately killed.

Will Cersei bear the full brunt of Arya’s fury next, or is there someone else with green eyes we’ve forgotten about? What will this end up revealing?

One of Daenerys’ dragons didn’t make it out alive

During the massive brawl, one of Daenerys’s loyal dragons met its end. It may have been hard to keep up with through all the carnage and seeing people (and wights) being stabbed left and right, but unfortunately, it did happen. Daenerys ended up having to finally say goodbye to Viserion, the dragon who had previously been turned into a creature of ice back in Season 7, as Cosmopolitan points out.

Sansa could potentially have foreshadowed Daenerys as a villain

Sansa Stark and Tyrion Lannister shared a surprisingly sweet moment during the episode. The pair were found hiding in the crypts while thinking back on how Tyrion wasn’t actually a terrible husband after all, as they joked about staying married. Perhaps if they had, all of the awful things that have befallen both of them since would not have happened.

But more importantly, this could point to Daenerys being the “true enemy” later on in the show, as Sansa refers to her as the “Dragon Queen.” This is supported by numerous fan theories across the internet, and while we’re not saying it’s true, it could absolutely be in the realm of possibility.

And while we’re at it...could it be that Tyrion Lannister is harboring feelings for Sansa Stark? Perhaps it’s best not to read too much into their conversation, as short as it was, but this close to the end, anything could happen. Still, it’s hard not to be into the idea of Sansa and Tyrion ruling together.

Arya’s dagger that killed the Night King belonged to Littlefinger

You may remember that Arya’s Valyrian steel dagger first made an appearance on Game of Thrones a very long time ago in the series. Vulture recaps its first usage: the assassin who tried to kill Bran while he was comatose. It has changed hands several times over the course of the series, with Catelyn Stark bringing the weapon back to King’s Landing, where it was given to Ned. When Ned perished (rest in peace), Littlefinger must have taken it and kept it on his person until season seven, when he ended up giving it to Arya.

There was essentially a convoluted mess over who the dagger belonged to and how it “started the war of the Five Kings” according to Littlefinger, but one reveal in season 7 that blew fans away: Sansa actually divulged it had belonged to him the entire series. Well, at least it ended up doing something amazing right? It took the Night King out, which is more than Littlefinger could ever say he accomplished in his miserable life.

Who will win the Iron Throne? We’ll have to wait and see. With only three episodes left, it’s time for the final stretch. Which fan theories will come to fruition? Will Arya sit upon the throne? It’s all up to the Old Gods, now.