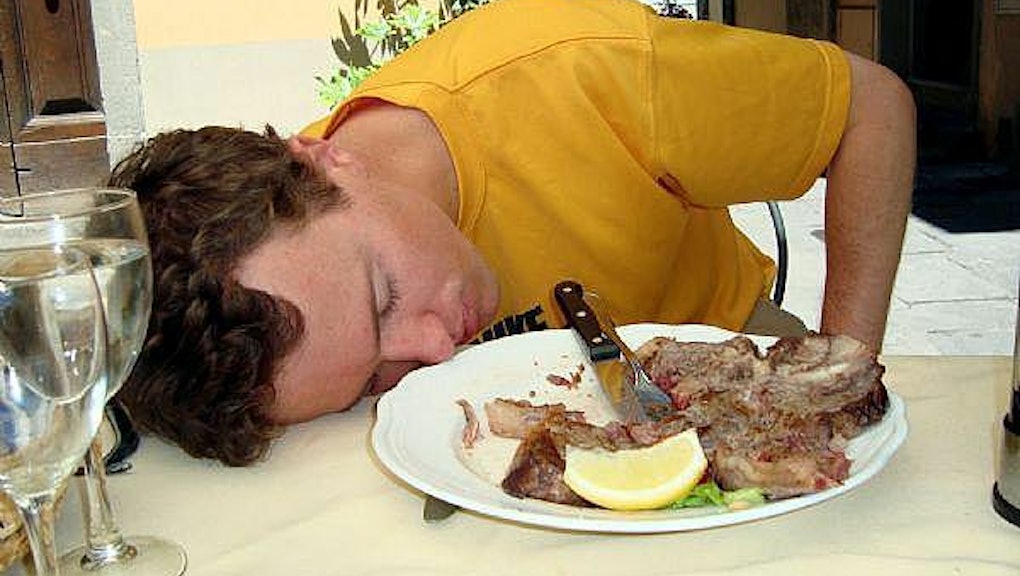 Why Your Thanksgiving Will Suck — In GIFs

Unlike most people, I don't view the holidays through rose-colored glasses. While many people will no doubt enjoy their Thanksgiving, there are plenty of others who could do without what is about to happen to them today. In fact, many Americans are looking toward Thanksgiving dinner with great trepidation because they know this Thursday is going to totally suck. Why? While there are many reasons, my Thanksgiving experiences tell me there are these eight recurring culprits.

1. Your meal was terrible

Because it's the most anticipated meal of the year, anything short of a spectacular and delicious spread is bound to disappoint. Believe it or not, scores of people who can't really cook host Thanksgiving dinner. Whether they are completely unaware of their lack of culinary acumen, or just think that having their relatives and friends over is enough, these people do everyone a great disservice. No one likes dry turkey, undercooked potatoes, or a dessert dish that you're hard-pressed to identify. Next time Aunt Sarah, who has the taste buds of a hyena, wants to have Thanksgiving dinner at her house, do the right thing: insist on Chinese.

Your Uncle Bill wants to argue every point and use every innocuous dinner table remark as a launching pad for a 15 minute dissertation on why Barack Obama has ruined America. It has nothing to do with you. He's fired up and is going to go at it with someone, or some thing. If he were the only guy at the table, he'd debate the squash.

On Thursday all across the country, Americans will effectively give themselves a morally-inspired pat on the back by reciting all the things they are grateful for: family, food, football, Jesus, Zeus, whatever. Tomorrow, those same people will venture out into the vast commercial hellscape of depraved consumerism and will completely lose their shit in a mad dash to score a deal on the latest thingamajing that's on sale. So much for being grateful for the "important things in life."

4. You hurt yourself playing touch football

Like most Americans, you're probably out of shape, so you should take it easy in the annual Thanksgiving family touch football game. But you didn't. Now, you're hobbling around like a wounded animal, wondering if you should put a frozen steak or a heating pad on your inner thigh. Did you pull something? Strain it? Could it be a partial tear? Who knows? Not you, because you definitely won't consult a medical professional. You'll just "see how it goes."

5. You drank too much

In a brave effort to forget how much the people you're surrounded by annoy you, you hit the booze. Hard. As a result, you told the people at dinner how really feel about their latest endeavors, which include now tanning four times a week as opposed to three and finally getting around to watching Mad Men from the beginning. Looks like you'll need to spend some of your Friday apologizing to the people you pretend to care about the most.

6. You root for the Detroit Lions

7. You already feel the need to start preparing for Thanksgiving, Part II

Also known as Christmas or Thanksgiving on Steroids, Thanksgiving, Part II is right around the corner. This holiday features the same aspects of regular Thanksgiving, but involves obligatory gift-giving, which means added financial strain and stress over whether you got that not-so special someone the right gift.

If you're a turkey, you might be screwed, unless you got pardoned by the president. Thanksgiving is the only holiday that's explicitly associated with eating a specific animal, i.e., you. It's nothing personal; it's just a quirky tradition in the American holiday canon.