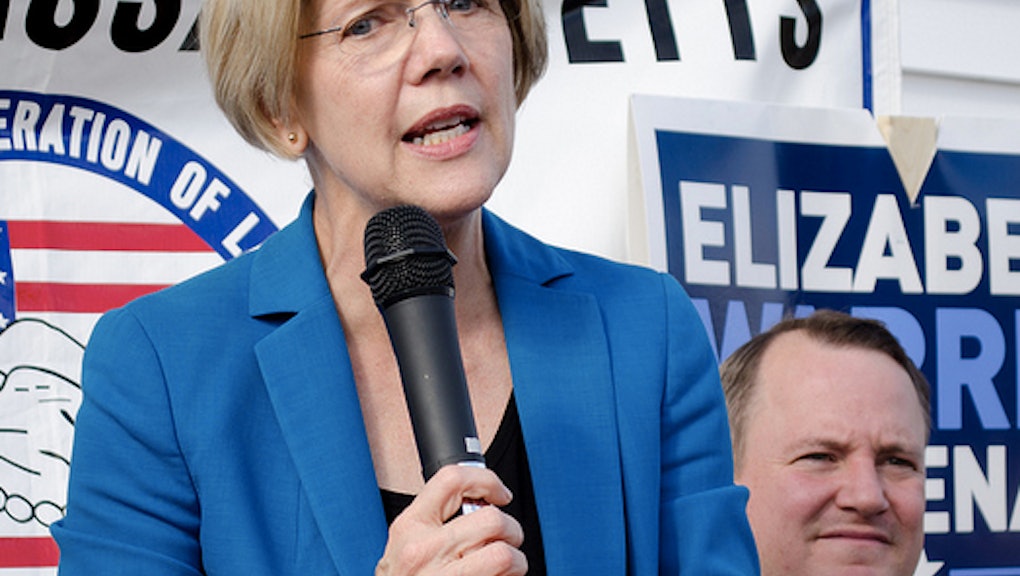 Elizabeth Warren: Why Lobbyists Want to Keep Her Off Powerful Banking Committee

Three weeks after Elizabeth Warren defeated incumbent Scott Brown for Massachusetts' Senate seat, the banking lobby has already geared up to keep her off the Senate Banking Committee. Warren's reputation has been built on her banking regulation expertise, particularly her role in establishing the Consumer Financial Protection Bureau. Her plainspoken critiques and pointed questions as chairwoman of the Congressional Oversight Panel on TARP, the banking industry's bailout fund established in 2008, have given industry lobbyists a good idea of what Warren would bring to the influential Senate committee. That experience is precisely why many, including the editorial board of the New York Times, believe her appointment to the banking committee is essential.

The lobbyists have reason to worry. Senator Warren holds a position of strength - and longevity - significantly greater than what she might have held as Director of the CFPB. Her fundraising record during the course of the 2012 election, where she ran in one of the most expensive races in the country, should also give lobbyists pause — she's proven that she doesn't need them to win.

But unless K Street also ignored Nate Silver's election predictions, Warren's electoral success shouldn't have come as a surprise — and neither will her likely appointment to the banking committee. So why all the fuss?

The strategy may be simple. The financial sector has two big concerns regarding the election results: who sits on the relevant Congressional committees, and who will take over when Treasury Secretary Tim Geithner departs the cabinet. Painting Warren's committee appointment as a polarizing issue makes the nomination of someone like JP Morgan Chase CEO Jamie Dimon — suggested Tuesday by influential billionaire Warren Buffett — seem like a "reasonable" compromise. Buffett emphasized that nominating Dimon would send a "big signal" to the business community, which is currently being courted by the Obama administration to support a compromise on the so-called "fiscal cliff."

Some view Dimon as Geithner 2.0, and if Geithner's terse exchanges with Warren during the TARP oversight hearings were any indicator, then placing Warren on the banking committee would help strike a balance between their competing visions for financial regulation. Given her eight point margin of victory, her appointment may actually be in little jeopardy. (Comparing the powers of a cabinet secretary to those of a junior Senator is also a stretch, and not an apples-to-apples tradeoff.) But don't expect the hype to die down anytime soon. In this game of 3D chess over sequestration, all pieces are in play until they're taken off the board.