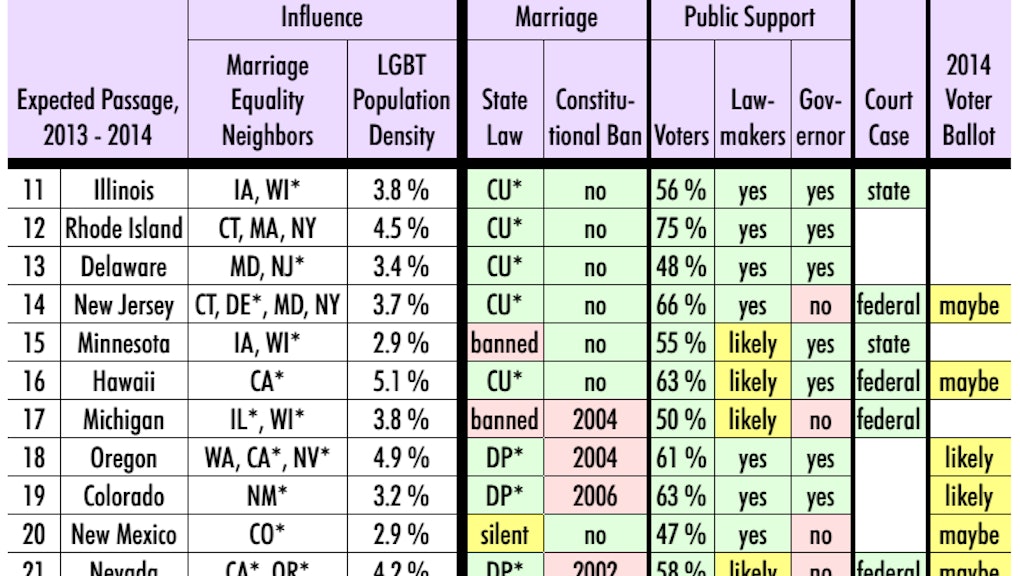 Over the last two decades, support for same-gender civil marriage grew rapidly, from only 12% in 1988 to 53% in 2012 — with similar results across 53 legislatures (50 states, the federal District, the Puerto Rico territory, and Congress), and overwhelmingly favorable progress with 42 lawsuits in state and federal courts.

Among America's many voter types, there are only five demographic groups left where opponents of equality still show up: less educated Caucasians (56%), the over-65 crowd (58%), Republicans (69%), evangelical Protestant Caucasians (73%), and Tea Partyists (nearly 100%). Those five are the only opponent hideouts left; every other demographic group measured in a major national poll now supports same-gender marriage.

As seen in ballot measures, legislation, and lawsuits, marriage equality is a prominent issue in 37 states. The next 12 states where legalization is underway are known, and the order in which they're finishing is now predictable. By the end of 2014, these next 12 states will join the 10 other jurisdictions that already have full marriage equality: Connecticut, District of Columbia, Iowa, Maine, Maryland, Massachusetts, New Hampshire, New York, Vermont, and Washington. At that point, 45% of America's citizens will live in the 22 states where lawmakers, courts, and/or voters decided to issue same-gender civil marriage licenses.

How did the order in which states are adopting marriage equality become predictable? Each state's rank is affected by 9 key factors: neighboring states, LGBT population, current law, state constitution, voters, lawmakers, governors, litigation, and ballot questions. No single factor, by itself, guarantees success or assures failure; but when the 9 factors are analyzed together, after adjustments for legislative calendars and ballot timing, the national road map emerges.

All 12 states have as many as four neighbor states with same-gender couples, and most already have a back-of-the-bus form of couple recognition such as domestic partnership or civil union, so voters already have proof that marriage equality brings no negative results.  In all 12 of these states, pluralities of voters already support same-gender marriage, and in all but a couple of states, majorities support it. In most of these states, there is no constitutional ban, but even in those states that have one, most voters now want it repealed, or a lawsuit is about to strike it down, or, as in California, it's both unpopular on the street, and is losing in court. Most of these states also have precedent-setting lawsuits underway, most of which are approaching conclusion, so in some states the courts may be able to achieve marriage equality before the lawmakers can enact it.

Each state in this next wave is taking its own, unique path. Here are the highlights:

11. Illinois: Lambda Legal and the American Civil Liberties Union are pursuing two lawsuits representing 25 same-gender couples in civil unions that have been proven inferior to full marriage. But legislators are on track to pass a same-gender marriage law well before those cases go to trial.

12. Rhode Island: Same-gender couples show little enthusiasm for the civil unions enacted in 2011, and appear to be waiting until they can truly, fully marry.

13. Delaware: Laws change only via this state's legislature or its courts; there is no ballot initiative, referendum, or recall. With no option for a ballot, and no litigation pending, all eyes are on the State House, where the governor is calling same-gender marriage "inevitable."

14. New Jersey: All three options are running in parallel: Democratic lawmakers are a few votes shy of overriding the Republican governor's veto of the marriage equality law that they passed in 2012; some lawmakers want to put human rights up to a popular vote, which the latest polls show would pass 53% to 36%; and litigation begun 11 years ago might generate a ruling before a veto override or a voter ballot.

15. Minnesota: The governor has promised to sign a marriage law as soon as the legislature can pass it.  A few fearful Democrats are reluctant to do so, but in their places are a few brave Republicans, making the final vote a cliffhanger.

16. Hawaii: At the first state legislature to ever consider marriage equality, the 23-year fight continues.  Multiple measures (statutory and constitutional) would allow same-gender civil marriage, and multiple counter-measures would ban it. Meanwhile, LGBT couples suing for full marriage to replace their back-of-the-bus civil unions lost their case in district court, but then appealed, with a trial likely around January 2014, the same time that legislators resume debating.

17. Michigan:Some citizens are trying to raise $10 million and gather 300,000 signatures for a 2014 ballot measure, while other citizens want to delay that human rights vote until 2016. Meanwhile, a federal judge just told two nurses who sued (so they could marry each other and adopt all their children jointly) that he won't rule on their case until he sees what the U.S. Supreme Court does in other marriage cases.

19. Colorado: Democrats retrieved control of the legislature from Republicans in 2012, at which point the victors said they'd pass a civil union law in 2013, repeal the constitutional ban against same-gender marriage in 2014, and then pass a new marriage law, also in 2014.

20. New Mexico: If both the House and Senate approve a constitutional amendment allowing same-gender marriage in 2013, it will appear on a statewide ballot in 2014.

22. California: The most complex, unusual, and long-running marriage equality battle in America continues to entertain, and to anguish. Now in its 13th year, the final disputes are before the U.S. Supreme Court to decide three main questions: whether the defendants (the sponsors of California Proposition 8, which ended marriages between same-gender couples) can defend a state law after state officials opted not to; whether those defendants would suffer harm from same-gender marriages; whether it's constitutional for California voters to repeal same-gender couples' constitutional right to marry; and whatever other topics the court might add. The possible rulings could affect just California, or all of the Ninth Circuit states, or multiple states in multiple Circuits, or all states, so the potential rulings are too numerous to itemize. But if the courts do not restore full marriage rights, then California voters — who now favor repealing the ban that they passed five years ago — will undergo another ballot campaign in 2014, perhaps costing another $80 million in private political funds.

Ned Flaherty is a Projects Manager at Marriage Equality USA.  In this article he represents himself, not the organization.  He writes from Boston, Massachusetts.