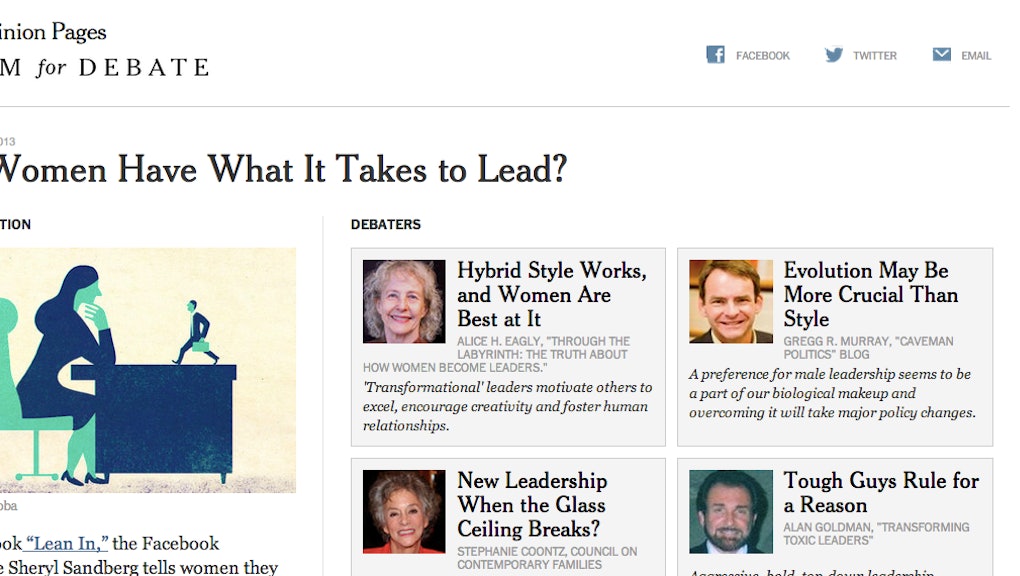 The New York Times Asks "Do Women Have What It Takes to Lead?" Uh, Yes

The New York Times, albeit being led by a prominent female, has decided to revive the whole "can women be bosses" debate ... which according to my sources, was last formally addressed in 1954 in the October issue of The Homemaker.

The series condescendingly entitled "Do Women Have What it Takes To Lead?" was casually inserted in the "Up for Debate Section." Rachel Sklarr, co-founder of Change the Ratio and The Li.st rightfully exclaimed: "Room for debate, @nytimes currently LED BY A WOMAN? C'mon. Trolling is beneath you."

Can you hear that? Ah yes. That's the distinct sound of thousands of face palms echoing all over the nation.

I thought we were finally at a place where we were wondering what it was about our culture that didn't encourage women to go into leadership positions, not if women's brains will overheat if they do. Well according to the New York Times, women's ability to be leaders is still "up for debate." Literally.

In one of the articles featured in the series, a writer claims that "a preference for male leadership seems to be a part of our biological makeup." Gregg R. Murray, author of the tellingly-titled (and also very face palm-worthy) book Cavemen Politics asserts that because dudes have always been the boss, it proves that we all naturally just prefer our leaders to be dudes. Just like the fact that white people have always made more money proves that people of color prefer to make less money. Right?

"... the dominance of male leadership spans centuries, cultures and species ... and because men have dominated the public sphere for millennia ... this diverse evidence powerfully suggests that women’s leadership disadvantage cannot be attributed solely to learned behavior that can be simply adjusted."

He claims that we venerate male bosses because we have "a strong preference in threatening circumstances for powerful leaders" that are male. Yes! Why solve a problem with my Masters Degree when a man can do it with his maleness?

In another article with the promising title "Tough Guys Rule For a Reason," Alan Goldman opens by saying the "aggressive, bold, top-down leadership style directly associated with the male animal may be under attack but it is still quite effective."

That's when I stopped reading, because I needed to check my watch to make sure it was still 2013.

Sure, the "debate" that the New York Times has pleasantly revived was tempered with less anti-woman sentiments, such as those of Stephanie Coontz, who proclaimed that "increasing women’s representation is only fair" and that women on boards could help "all employees, at every job level, need to be able to integrate their care-giving obligations with their work responsibilities." Despite these useful points, the fact that they were drowned in a sea of offensive statements essentializing male superiority is troubling.

At at time when the percentage of female leaders in the world is upsettingly low, it's insulting that any journalistic space even be allocated to debating whether women have the proper abilities to lead.

Only 4% of Fortune 500 companies have female CEOs. Considering that every year 150 people die from coconuts falling on their heads, there's probably a greater chance that more women will die from accidental coconut attacks than will make it to the top of a Fortune 500 company.  That makes me want to hit my head on a couple of coconuts, or at least forget about that statistic by drinking a couple of coconut-flavoured cocktails.

If the fact that more women might die from a coconut-related accident than lead a Fortune 500 company doesn't worry you, then maybe the fact that a only 1 in 10 world leaders is female will. It's time we stop asking if women can be leaders and ask why women are being prevented from pursuing or entering these positions in the first place.

In that list of obstacles, I'd put articles trivializing women's leadership abilities like those in this week's New York Times right at the top.