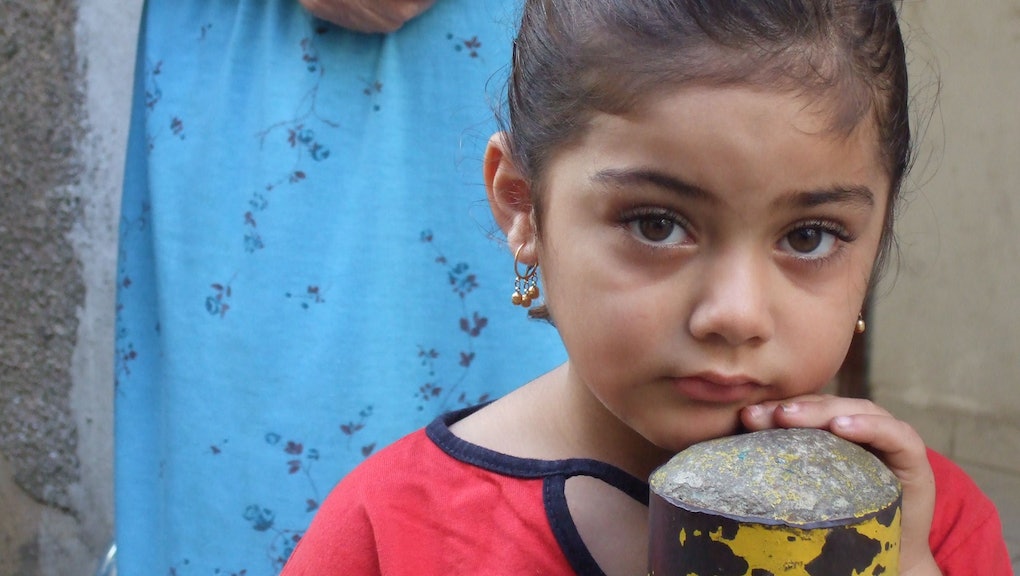 With 2 Million Iraqi Refugees and 100,000 Civilian Deaths, the Iraq War is Far From Over

So the war in Iraq is over I’m told. Troops left. Equipment left. Iraqis left.

In his State of the Union speech, President Barack Obama said, “For the first time, there are no Americans fighting in Iraq.” Most, then, will think this is the end of the war. Unfortunately, it’s far from over for the millions of Iraqis left fighting for their lives after our unnecessary war.

On the tenth anniversary of 9/11, I was down near the World Trade Center site performing an act from a play I wrote about Iraqi refugees. Within minutes of taking the stage in front of City Hall, I started to get harassed by passer-bys. “America, baby!” shouted one man with a taunting smirk. “Bang! Bang! Shoot ‘em all," railed another. There were other remarks, too violent and vulgar to repeat.

This is not the America I thought I knew.

We can say these were freak events, isolated incidents, not representative of the whole. And I don’t think they are representative of the whole, but I think they are more common than we’d like to admit. These were “real” Americans, some of them even in uniform, speaking their minds. The anger and ignorance startled me. Why does defending our country mean de-humanizing another? Since when do patriotism and bigotry go hand-in-hand? Distinct from what popular media might have you believe, Iraqis are people too.

Over 4 million Iraqis have been displaced since the 2003 invasion, a war that would not have taken place without the Bush administration's violent overreaction to 9/11. That's 4 million people; about 1 in 5 Iraqi citizens have been displaced. After travelling across the country to perform my play, I've learned that most Americans don’t know this. And at least 100,000 Iraqi civilians have died since the invasion. 100,000. These are big numbers.

Almost 3,000 innocent Americans died on 9/11, a tremendous loss. Yet the carnage in Iraq is far greater, and the 100,000+ innocent lives lost in Iraq in the wake of our invasion get scant attention, if any. These people were real mothers, sons, and daughters. What day commemorates the Iraqi father shot on the street? Or the kidnapped and beheaded uncle? Or the murdered Iraqi child?

Most Americans don’t know these numbers or the stories behind the numbers, because it doesn’t fit the narrative we tell ourselves about our war of "liberation," or what the news media told us about Iraq. Mainstream media continues to fan fears about the "other," regularly churning out false and nefarious information about Islam. They would have you believe anyone different from you is bad, and if they are Muslim, watch out! This is evidenced in the xenophobia and fear-mongering that led to the resistance to building mosques in New York City and around the country. Our law enforcement agencies are guilty too. It was recently reported that anti-Islam material was part of FBI-training and NYPD training. Really? This is not who we are as Americans, or at least who we were. Have we lost all common sense due to this exploited fear?

While researching the plight of Iraqi refugees in Syria, Jordan, and Lebanon, I was touched by Iraqis' boundless generosity, especially from those who have lost so much. Each one burrowed deep into my heart. I expected to tell their stories of heartache and anger, but miraculously in all their stories, I found love, and the story I ended up writing was a love story. It may sound naive, but I think if every American could meet an Iraqi, sit with them, share tea, and see that most of them are just like us, with the same hopes, fears, dreams, and hearts, they might forget the hatred and fear-based nonsense and once again welcome the stranger, the neighbor.

We are a nation of immigrants. We were all “them” at one point. We were all the “other.” When did our hearts get so small? If this is the end result of 9/11, then the terrorists succeeded in dehumanizing us, making us forget who we are, making us look at the loss of human lives and human suffering as merely ‘collateral damage.’ We are so much more.