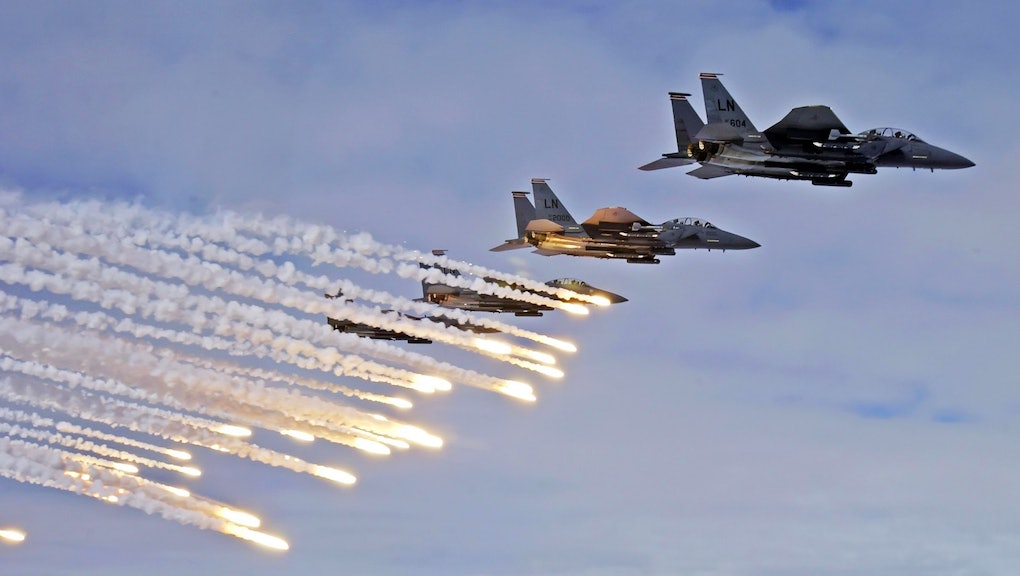 America Spends $931 Billion Every Year on Defense, For a Simple, Ugly Reason

The idea that the United States has to be the police force of the world is no longer affordable, and it was never constitutional. With Fitch recently issuing a warning about a possible downgrade of the United States' credit rating, especially on the heels of a 2011 downgrade from Standard and Poor's, it should be clear just how unstable the financial situation of the country really is. One of the most expensive parts of our national government is our Defense Department and all other spending that relates to national defense. It is absolutely necessary for our foreign policy to be reformed, both for financial reasons and for constitutional reasons. So why are lawmakers so quick to increase defense spending, and loath to cut any of it? If we follow the money trail of the country's largest military contractors, we'll arrive at our answer.

When we look into the real numbers of defense spending, we must examine beyond the Pentagon's base budget, as this does not include war funding, as well or other programs that are considered vital to national security. The 2013 base budget for the Pentagon, which only consists of the money spent on the military, is $530 billion, but that is just the beginning of what really is being spent. When we include war funding, nuclear facility maintenance, weapons programs, Homeland Security spending such as the Transportation Security Administration, and other federal agencies, we come to an enormous $931 billion per year in defense spending.

In the past, operations such as the Iraq War have resulted in the United States becoming involved in other areas of the world with the aim of spreading democracy and eliminating dictatorial regimes. The wars in Iraq and Afghanistan cost the United States roughly $1.5 trillion, and what's more, these wars were undeclared, meaning Congress never officially took up a bill recognizing them as actual wars. The last declared war the U.S. fought was World War II. And after all that was spent in Iraq, many analysts believe things have gotten worse there.

Every year, we see Congress increase spending and manufacturing expenditures for our military. Even when the military branches do not want increases, Congress finds an excuse to do it. Senior Army officials have told Congress that they do not need any more Abram tanks, for example, but Congress decided to go through with it anyways. These tanks cost the taxpayers roughly $7.5 million each.

With our debt growing and top officials saying they do not need increases in spending, why are lawmakers so eager to jump to an increase?

If we look into the money trail of lawmakers' campaigns, we can find the answer to our question. One of the many pro-military lobbying groups is Northrop Gurman. Northrop Gruman is "the fourth largest defense contractor and the world's largest builder of naval vessels as of 2010," as reported by OpenSecrets.org, a website that deals with campaign finance transparency. In 2012, Northrop Gruman spent more than $3 million in political campaign contributions, and $17.5 million in lobbying efforts.

Another big-time donor is Boeing, which manufactures military drones in addition to airplanes. In 2012 Boeing spent a little under $3.5 million in campaign contributions, but spent over $15 million on lobbying efforts. Over 10 members of Congress hold shares in Boeing as well, some of whom hold shares in Northrop Gurman.

With every passing day, the United States keeps digging a financial hole for itself and is making it harder to get out of debt. With the national debt now well over $17 trillion, the United States must look into cutting its military spending. Lawmakers keep increasing military and defense spending because it is profitable for the companies that are invested in it, and for the lawmakers invested into the companies. But ultimately, our government is spending money it does not have. In order to fix this problem, and avoid any more financial damage, we need to understand that it is absolutely necessary to have real military cuts on the table. After all, the biggest threat to our national security isn't a foreign power — it's our own national debt.