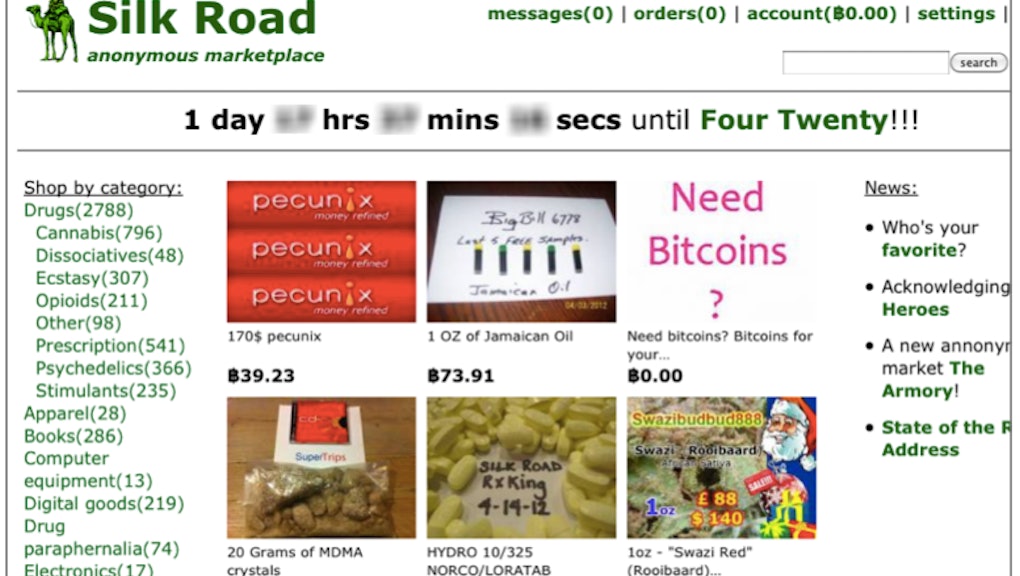 Welcome to the Silk Road: An Inside Look At the Darkest Corner Of the Internet

Reuters wrote, "According to prosecutors, Ulbricht aided in the trafficking of controlled substances from January 2011 up until last week. The authorities say that the narcotics moved through the Silk Road site include one kilogram of heroin, five kilograms of cocaine, 10 grams of LSD and 500 grams of methamphetamine."

They operate their business anonymously, through virtual tunnels and encrypted browsers, beneath layers and layers of the internet’s surface. They run a marketplace for sellers who advertise items ranging from books to Afghani black tar heroin. Welcome to one of the darkest corners of the underground web.

“Silk Road” does not refer to the ancient trade route between Asia and Europe, through which silk and other goods were hauled. This new Silk Road runs along one of the internet’s back alleys — the goods are narcotics, the caravans are modern postal services, and the currencies are digital crypto codes. It’s the web’s black market, where new cutting edge currency can buy you anything, but where drugs are the product of choice, delivered straight to your door through everyday mail services. It’s peaking in the age of online sales and communication, exponential booms in technology, and during a time that people are particularly primed to guard their digital privacy. Silk Road might just be the clandestine Amazon for druggies and dealers, but it also has broad and major implications for what the future could look like for virtual currency, online privacy, and even the international drug trade.

Nicolas Christin is intimately familiar with Silk Road, not because he is a patron, but because he wrote the first comprehensive analysis about it after conducting a six-month research crawl on the site. Christin, the associate director of the Information Networking Institute at Carnegie Mellon University and researcher at the University’s Cybersecurity Center, was surprised by what he found. “To me, the most surprising thing was how normal, when you set aside the goods being sold, the whole market appears to be,” he said. Of the operators who control the site, he said, “Silk Road is interesting because people view them as drug dealers, and they're not. They're essentially selling insurance to people who sell and buy drugs … clearly not what people think Silk Road is making money from.”

This past week, Forbes released the first-ever extended public interview with the site’s anonymous operator, Dread Pirate Roberts (DPR). During the conversation — which was, of course, conducted and routed through Silk Road’s encrypted messaging system — DPR said, “What we’re doing isn’t about scoring drugs or ‘sticking it to the man,’ it’s about standing up for our rights as human beings and refusing to submit when we’ve done no wrong.”

DPR’s identity has never been discovered. His Silk Road site is only accessible via the hidden browser Tor, the self-described “network of virtual tunnels” that enables internet anonymity to its thousands of daily users through 3,000 volunteers who triple bounce bits and pieces of information all over the web so that identity and activity of the user cannot be traced. Considering that Tor hides the user’s digital footprints, and monetary transactions are only acceptable using Bitcoin — digital, unregulated, and decentralized currency — it’s not surprising that the site attracts illicit activity. In the Forbes interview, DPR said, “Bitcoin and Tor [have come] together to spark the revolution that is Silk Road.”

Beyond that, though, he refused to answer anything about the site’s total sales, rate of growth, numbers of users and sellers, or profits. So what do we know about Silk Road’s numbers, exactly?

At the time of his site crawl, Christin calculated slightly over $1.2 million in revenue per month for Silk Road sellers, which corresponded to $92,000 per month in commissions for the Silk Road operators, who collect commission on every transaction. Specifically, they charge 10% for items under $50, 8.5% for items from $50 to $100, and so on. Christin does not know today’s exact sales volumes, but said that the number of vendors has doubled since the end of his measurement last year, and the number of items being sold has also more than doubled. “So, it stands to reason that sales volumes have also increased significantly,” he said.

In the Forbes interviews, DPR only “half-jokingly” said he would not consider selling the company for less than a billion dollars. Christin added that the emergence of competitor sites — such as Black Market Reloaded, Atlantis, and Sheep Market — tends to indicate the market as a whole has grown.

Senator Chuck Schumer (D- N.Y.) has been pressuring the Department of Justice and the DEA to shut down these sites for some time. In an interview with PolicyMic, Schumer said he’s made six calls to the DOJ and the DEA in the past year, but the agencies do not give out information on open investigations. The DEA has thus far had success shutting down two sites similar to Silk Road, with one of those shutdowns involving eight arrests. But those sites did not have the same cryptographic complexities that Silk Road has, Schumer said.

Christin examined over 24,400 publicly listed items and used the market data to characterize the items being sold and the seller population. His primary findings were that the site is “overwhelmingly” used as a marketplace for narcotics (as opposed to weapons or pornography), that most items are listed for less than three weeks, and that “the majority of sellers disappear within roughly three months of their arrival.”

During the time of his crawl, there were approximately 220 distinct categories of items, ranging from books and digital goods to prescription drugs and LSD. In Christin’s report, he wrote, “The four most popular categories are linked to drugs; nine of the top ten, and 16 of the top 20 are drug-related.” The site had more inventories for “soft drugs” like marijuana and hashish, which “presumably simply reflects market demand.”

In the Forbes interview, when DPR was asked about moral guilt “about selling highly addictive and dangerous drugs to users and even to dealers,” he responded, “On the contrary, I am proud of what I do. I can’t think of one drug that doesn’t have at least some harmful effects. That’s really not the point though. People own themselves, they own their bodies, and it is their right to put into their bodies whatever they choose. It’s not my place, or the government’s, or anyone else’s to say what a person does with their own body. Giving people that freedom of choice and the dignity of self-ownership is a good thing."

During Christin’s pilot crawl, there was a “relatively significant market” of sellers — a core of 112, and upwards of 1,200 sellers on the site at a given point. Others would come and go, or possibly “go stealth,” meaning that after the seller had developed a strong client base, he or she would no longer list items publicly on Silk Road but rather send the URL directly to the loyal buyers. Stealth sellers were impossible to track, as were exact buyer numbers.

However, he was able to determine where the drugs were coming from. The U.S. comprised almost half of the items’ shipping origins, at 44%. Sixteen percent of shipments were listed as “undeclared,” the U.K. was 10%, interestingly “a distant second” from the United States. The Netherlands was “strongly represented,” accounting for 7% of shipping origins, “presumably because they have easier access and just do arbitrage — go to the coffee shop, buy some weed, mark it up, resale it to the people in the U.S.,” Christin said.

In terms of acceptable shipping destinations, Christin was surprised to find that about half of the sellers were willing to ship worldwide, despite the nature of the products. “One would think that sellers may be reluctant to ship across borders. It turns out not to be the case, for a couple of reasons.”

Firstly, some sellers with established reputations require payment prior to shipment. Secondly, the quantities sold are generally small, and tracing the seller can be a “very difficult task” because they use courier services rather than local post offices. Christin explained, “Most quantities are fairly small which makes it relatively hard for customs or post offices to intercept them. They can't inspect every single piece of mail that goes through, especially when sellers are very ingenious at concealing what is inside the package.”

In addition, as he wrote in his report, “Economic incentives justify worldwide shipping,” because sellers can factor in their selling price, the risk of package seizure, and “accordingly offer loyal customers at least partial refund guarantees.”

This is where the money comes in. When Bitcoin is used as currency and not an investment, “Certainly one of the largest players is Silk Road,” Christin said, calling the site a “non-negligible” part of the Bitcoin economy. One finding stood out in particular. “Silk Road transactions correspond, in volume, to about 5% of all exchange transactions that are being carried out,” he said. In his analysis, Christin estimated Silk Road’s annual Bitcoin use at $15 million, which, in the scheme of things, is still fairly small percentage for Bitcoin considering that there are 11 million Bitcoins currently in circulation and about 60,000 Bitcoin transactions per day.

DPR said, “We’ve won the State’s War on Drugs because of Bitcoin … I think it will be looked back on as an epoch in the evolution of mankind.”

One could argue that the relationship between Bitcoin and Silk Road was evident from the start. When Gawker first broke the story about Silk Road in June 2011, four months after the site’s inception, Bitcoin’s value went from about $10 to $14 in 48 hours. Gawker’s next headline read, “Everyone wants Bitcoins after learning they can buy drugs with them.” As of late August, Bitcoin’s value hovers above $110. Though Christin’s research was from 2012, he said, “I don't think that long-term Bitcoin fluctuations really affect sales that much. They have an impact on the marketplace operators, but that is a separate issue. Short-term spikes on the other hand, do, which is why Silk Road provides hedging services.”

Actually, just days ago, it was revealed that state and federal officials have begun investigations into Bitcoin. (A few months ago, in an interview, a spokesman from Mt Gox – the platform in Tokyo through which Bitcoin trades are made — said, “U.S. dollars are the primary means of purchasing illicit goods and services … So should the U.S. government stop issuing dollars? Bitcoins are not predominately used for illicit transactions. We, Mt Gox, do not condone the purchase of illicit goods and services, but at the same time, we are not Bitcoin, just as the U.S. government is not dollars.”)

Bitcoin introduces a problem with anonymity for Silk Road, because each transaction has an IP address that can be tracked. However, there are computer scientists who are already exploring whether it is possible to have a truly anonymous digital currency.

In response to holes in anonymity, cryptographers behind ideas like Bitcoin have taken up the challenge and are adapting and creating deeper, more complex layers. A team from Johns Hopkins presented Zerocoin, the “anonymous distributed e-cash from Bitcoin” at the May 22 IEEE Security & Privacy Symposium, which Christin called “arguably the most prestigious venue for computer security research.” Matthew Green, who led the Johns Hopkins Zerocoin research team, said that reception was “very positive” and that they “got a lot of people who were interested.”

Christin said of the Zerocoin team, “These people are very smart, well-respected cryptographers who know what they are doing,” but he was sure to note that the Zerocoin team was not involved in any illicit activity and were not Silk Road sympathizers. Still, he added, “Seeing this ecosystem being built up is quite fascinating.”

Christin also acknowledged that the operators of Silk Road were clever cryptographers in their own right. “Setting aside what is being sold there, they are very successful entrepreneurs, with good engineering skills to run and maintain a pretty complex environment.”

“Remember,” he said, “If they make a single mistake, they could spend their lives in prison.”