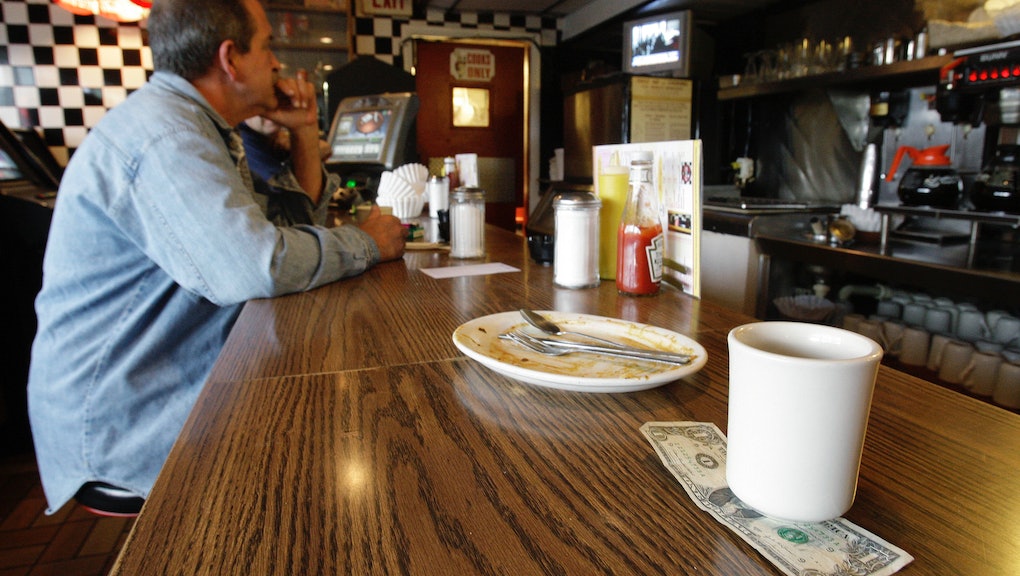 A Progressive Argument For Putting an End to Tipping

A groundswell is brewing in the American food service industry that many hospitality industry analysts have long predicted: the end of tipping. With an increasing number of restaurants moving away from the practice in favor of a basic service charge, and a growing resentment against tipping among consumers, the moment to rid ourselves of the need to calculate 18%-20% is fast approaching. The basic service charge (basically incorporating higher wages into the purchase price) could be the trend of 2014.

Everyone, progressives most distinctly, should be overjoyed. The dirty reality is that tipping is ... dirty.

Indeed, to many in the field, the emerging trend is fantastic news. "Tipping is a repugnant custom," vented Slate columnist Brian Palmer last year. "It's bad for consumers and terrible for workers. Tipping does not incentivize hard work. Tipping isn't even good for restaurants, because the legal morass surrounding gratuities results in scores of expensive lawsuits."

Wow, that bad? To the millions of us who unthinkingly embrace the custom, critical analysis of tipping is generally associated with the low-rent kvetching of cheap and ungrateful patrons.

We all know someone who reliably tries to welch on tips, either by quietly contributing too little money to a group check or by leading the table through an NFL combine-worthy rundown of a server's weaknesses. In the service industry, however, tipping has been a thorny issue for years. Now, many are suggesting it be simply done away with.

The custom of restaurant tipping arrived in the United States during the Gilded Age, when wealthy European émigrés brought their highly stratified notion of class to the nation's finer establishments. "To tip someone was as much about establishing a hierarchy between superior and inferior as it was about compensating a waiter, valet or servant," wrote history professor Stephen Mihm. "Giving a tip was a power play, and accepting one was a sign of servility."

It affronted the American principle of equality, many considered it an outrage. "I consider [tipping] degrading to the giver as well as to the receiver," wrote a New York Times reader in 1899. "The very shamefacedness with which it is practiced stamps it with the feature of blackmail and bribery. And the thralldom and yoke under which it puts its victim is truly sad to behold." Several state legislatures even outlawed it.

Tipping's re-emergence, theorized Mihm, came from American restaurants being more than happy to pass on labor costs to patrons. Thus, the practice endured.

It's easy to defend tipping. For one, the modern practice is largely stripped of its classist overtones. More than that, tipping is a charming enigma the likes of which Americans don't often see in our transactions. In a Walmart-ized landscape of anonymous debit card swipes and haggle-free pricing, spending the effort to determine the job that someone did for you is a small interpersonal relation. When you stand up and thank the server, you know what you left them. Your grade has been recorded. And this is satisfying.

But that satisfaction precisely roots the argument for getting rid of it. It's a power play, and it's unnecessary. Of course, you like the tiny smugness that comes with leaving a decent tip — that's why European elites began doing it in the first place. For the sake of that modicum of dominance, though, the service industry fields a constant barrage of legal issues stemming from the fact that it is difficult to institutionalize what is nominally an act of courtesy.

Automatic gratuities, for example, are a notorious indignation to many diners. "A predetermined tip is mighty presumptuous," wrote the Chicago Tribune in an editorial best read in a fed-up old man voice. "A server who doesn't have to earn his or her tips has little incentive to try, and the customer has no choice but to pay a premium anyway."

Actually, critics say, this is precisely the patronizing misconception that tipping perpetuates. "In any workplace, everyone is required to perform well, and tips have nothing to do with it," said restaurateur Jay Porter, who claims that instituting a "service charge" and accepting no additional tips at his restaurant led to an improvement in food quality, business, and server take-home pay. "Servers are motivated to do a good job in the same ways that everyone else is. Servers want to keep their jobs. Servers want to get a raise."

In that light, what's so crazy about the proposition that an employee will work for a normal paycheck just as, if not more effectively as hustling for tips? While putting servers on salary places the full onus of labor cost onto the business (an ordinary burden in every other industry), an automatic gratuity is easier to divvy up between cooks and servers, both of whom make about the same base pay.

Enough restaurants have moved to this model that the IRS enacted a ruling this January clarifying that automatic gratuities are to be considered a "service charge," thereby exposing them to payroll taxes and requiring restaurants to account for them. It will be an interesting test for the model: If higher base pay and equitably split gratuities really make better business, restaurateurs will continue to migrate to automatic gratuity, and tipping may go extinct.

That'll be good news to Cornell Professor Michael Lynn, who has written 51 academic papers on the subject of tipping. Not only does the reliable income of automatic gratuity help restaurant owners, he claims, it also overcomes tipper bias. "Consumers of both races discriminate against black service providers by tipping them less than white service providers," he reported in the 2008 study "Consumer Racial Discrimination in Tipping: A Replication and Extension." The difference was pronounced enough, according to Lynn, that continuing to rely on a tipping model may expose restaurateurs to unfair employment lawsuits.

Whether to thwart the many legal issues inherent in, essentially, half-hiring an establishment's customer-facing labor, or simply to ensure compensatory equality, proponents of automatic gratuity are dismissing the critics and encouraging an industry-wide migration. With the new rules taking effect now, it remains to be seen whether American eateries will adopt the hiring practices of their more intrepid fellows — and that of every other industry.