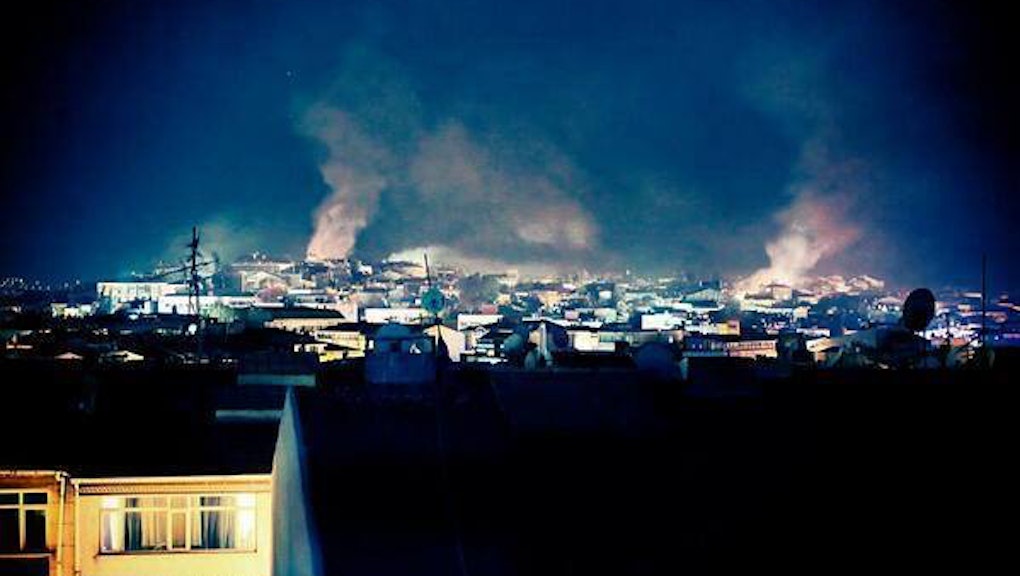 Turkey Protests 2013: This Cloud Of Tear Gas Says All You Need to Know

The image above depicts clouds of tear gas in one of the most residential areas of Istanbul, Kadiköy. Police forces have been using tear gas in the area since last week.

Kadiköy was also home Serdar Kadakal, the seventh person on the growing list of people who died due to police interventions in Turkey. Contrary to his predecessors, however, Kadakal was not a demonstrator and did not participate in any of the protests against the Erdogan regime. He simply had a heart condition and happened to be a Kadiköy resident. Friday night, he died of heart failure. Similar to prior Occupy Gezi-related deaths, the police forces denied any connection between the death and their riot-control activity.

This marks a new stage in Gezi protests, with documented proof that non-protesting Turks have become collateral damage. The documentation may prove to be insignificant in the longstanding tradition of denial and never-ending conspiracy narrative of AKP, Turkey's ruling party.

AKP congressman and VP of Political and Legal Affairs Samil Tayyar gave a speech on Sunday, describing the Gezi movement as a coup attempt. Contrary to his speech, I can personally speak for my immediate network and say that none of us were organized by outside forces or the shadow government. If you do consider us pawns led by forces seeking Erdogan's demise, perhaps your perspective could benefit from this reminder: All protesters were and are, first and foremost, citizens of the Turkish Republic. And to reduce your own constituents to chess pieces is poor governance.

Here are a couple of reasons why the behavior of Turkish citizens does not require a conspiracy theory:

-ODTÜ students who had protested Erdogan when he attended a satellite launch on campus last year were all sentenced to prison for six years, with pending charges of terrorism.

-Thirteen teachers in Adana were placed under investigation by the Adana Municipality Education Board on grounds of participating in the Gezi protests and instigating masses to join the protests.

The degree to which Turkey needs an administrative and governmental overhaul is so overwhelming that ithe real question becomes, where do we begin? Receiving renewed international interest and support could be a good stepping stone.

If hundreds of thousands of people have been physically and chemically assaulted by their own government, why is the world not pressuring Erdogan the same way it's been pressuring Putin and Assad? What exempts Turkey from the "benevolence" of the West? A military intervention would hurt the democratic process, but the lack of international pressure, which has been focused on Syria, is hurting the Turkish public.

Whether Turkey's chapullers get the international support they need, the country's immediate future looks as grim and nebulous as the tear gas clouds that are still hanging over its various cities.