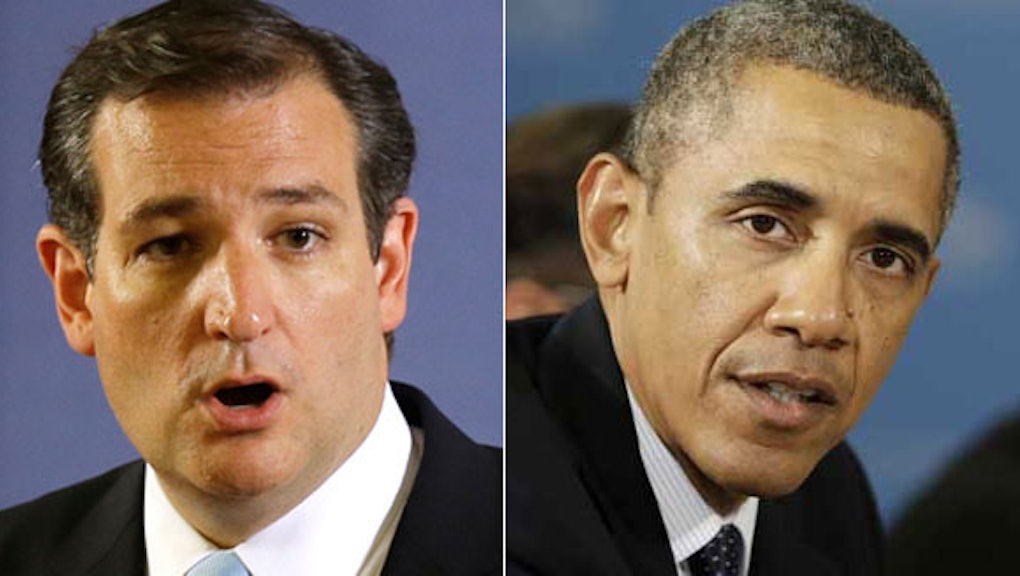 If the Tea Party and Democrats Don't Learn From History, We'll Fall Like Ancient Rome

President Obama's and Ted Cruz's feud has nothing on Gaius Julius Caesar's and Marcus Porcius Cato's from the tumultuous final decades of the ancient Roman Republic.

Recently, I wrote about the Republic's final century of implosion and its similarities to the U.S. Here, we'll examine a specific incident from the Cato/Caesar showdown that resembles our current political dysfunction, the lessons from which should concern anyone living in a democracy. Let's see if you can spot the Tea-Party-style extremism throughout.

Virtually all political reform in Rome in the first century BCE was obstructed for decades by the conservative, traditionalist optimates who dominated the Senate in their struggle against populist, man-of-the-people reformist populares. Extravagant, flamboyant, charming Caesar, not yet 40, was already famous and popular because of his exploits and as the nephew of one of Rome’s greatest generals and populares. In contrast was the severe, austere Cato, descendant of one of the most famously traditionalist Romans. Cicero wrote of Cato that, “In spite of his exemplary attitude and total integrity, he sometimes inflicts damage on the state, for he delivers speeches as if her were in Plato’s Republic and not in Romulus's [Rome’s founder] cesspit.”

Caesar, who was at this time already well into an affair with Cato’s married half-sister, first publicly clashed with Cato in 62 BCE in a nasty senate debate about whether to execute exposed conspirators who had planned to overthrow the government. Later, Cato became leader of the optimates and continued to block any meaningful reform.

As Caesar won military victories as a governor in Spain and was rewarded with the right to a triumph — one of the greatest, rarest honors the Republic could bestow — Caesar was also hoping to run for consul, Rome’s highest office, for the year 59 BCE. But Cato, using a Senate filibuster (sound familiar?), forced him last minute to choose between the triumph and running. Turning down the triumph, Caesar won the election; Cato’s son-in-law, Marcus Calpurnius Bibulus, came in a distant second, so the two would be co-consuls for the year 59.

Caesar began his term by immediately introducing a major land bill to the Senate. It would create an elected commission of 20 men to purchase farmland with surplus funds and distribute it to thousands of veterans and urban poor. Only Cato expressed an objection about timing, not content; even he admitted the bill was good. But then he then kept talking in an effort to filibuster the bill. Caesar uncharacteristically lost his composure and did what only a few senior officials could legally do, ordering his official ceremonial bodyguards (lictors) to detain and temporarily imprison Cato for deliberate obstruction. Debate continued, but after one senior Senator got up and left in support of Cato, all other Senators followed. No vote was taken and Caesar released Cato.

Soon after, Caesar called Bibulus for a hearing on his bill in the Forum. When Caesar and the crowd pressured Bibulus to support it, Bibulus yelled, “You shall not have this law this year, even if you all want it!” and marched off. Though Cato and Bibulus claimed to be defending the Republic, in reality, their opposition was shared with only a tiny (though senior) minority.

Going against custom but within his rights, Caesar brought his bill to a people’s assembly later that month without endorsement from the Senate. Supporters of Caesar, likely including some veterans, lined the forum as other citizens came to vote. Going against a custom of not opposing a fellow-consul, Bibulus, with his own consular lictors and attendants, showed up with Cato and their allies in the middle of Caesar’s pre-vote speech, intending to veto the proceedings or use Bibulus’s consular ability to declare “ill omens” to force a postponement of the vote.

Fighting broke out. Bibulus had a bucket of feces dumped on his head, the symbols of his office smashed, and his attendants roughed up (some injured), as he and the bill’s opponents were driven off. The bill easily passed. In this case, lack of customary restraint by one party encouraged the same in the other.

When unable to postpone votes by declaring public holidays, Bibulus issued a declaration of “ill omens” from his house every time Caesar called an assembly to vote. Caesar and the public ignored these declarations and didn't take them seriously, but once Caesar would cease to hold public office, those declarations meant he would be vulnerable to prosecution by his enemies, thus tying his political success to his legal security. As factionalism and obstructionism dramatically worsened, undermining over four centuries of republican governance, this would be a major factor in the outbreak of the civil war that would destroy that system 10 years later.

While no one is dumping feces on Senators' heads today, the legislative gamesmanship in this incident feels far too familiar. Like Cato and the optimates, Tea Partiers prize principles over compromise and accomplishments, constantly engage in hyperbolic and vindictive rhetoric, and embrace radical tactics that set new precedents for knee-jerk-obstructionism, including abuse of the filibuster, even when theirs is the minority view. This is the case with Obamacare, which House Republicans voted 42 times to defund/repeal/dismantle with no hope of those votes becoming law. They should remember that there is no going back once new ground is crossed.

I fear that it is just a matter of time before the debt ceiling is once again used as a last-minute political poker chip, and before even worse tactics are employed.

Hopefully, the Tea Party's willingness to defy custom won’t bring out the same from Democrats. Both parties should remember that the public’s patience with them and the government is not infinite and that no system is immune to self-destruction.