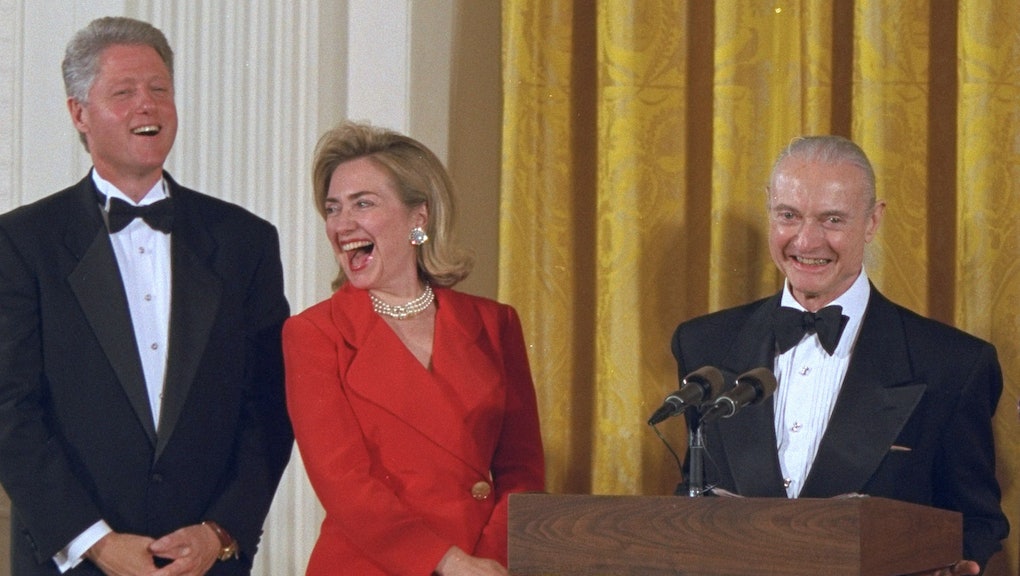 Why We Love Angry Men, But Hate Impassioned Women

Ever notice how anger helps a man command a room, but it often has the opposite effect for women?

While the former comes off as passionate, the latter is often remembered as emotionally erratic, an outcome predictable enough to make any woman angry. (Can someone say vicious cycle?)

But there may be a way out, if a new book by John Neffinger and Matthew Kohut is any indication. In Compelling People, the authors posit that what makes individuals captivating is their ability to communicate both strength and warmth, but they recognize that it's a fine balance — and that balancing act is trickier for women.

As a passionate feminist writer who covers gender in politics, this wasn't news to me. It's hard to remember in the wake of Sydney Leathers, but before Anthony Weiner went into complete and utter auto-destruct mode, he was highly regarded by voters for his audacity and unflinching boldness. I remember working in a non-profit organization in D.C. where my coworkers would huddle up at lunch to watch the emboldened congressman ripping Republicans to shreds on the floor over a law for 9/11 heroes, or women's reproductive freedom, or public funding for NPR. The more he lost his temper, the more he rose in stature to us.

When Senator Claire McCaskill showed half the amount of competitiveness and confidence during the 2012 general election, she was told that "she was very aggressive" that she used to be much "more lady-like." It was a similar story in 2008, when Hillary Clinton, a front-runner for the democratic presidential candidacy, was called "too angry to be elected president" by a prominent Republican. A look back at Clinton's years as First Lady and as a U.S. senator shows that she was met with even more vitriol for being assertive.

In their book Compelling People, Neffinger and Kohut cite a study that showed that Hillary Clinton "has been the butt of more jokes than any other human being, living or dead". Surprisingly, the woman nicknamed "Chillary" by comedians and politicians alike, climbed in the polls after the Lewinsky scandal "because a significant part of the public sympathized with her as an aggrieved yet loyal wife, even if she did not outwardly radiate warmth." This poll trend sends a troubling message about what it means to be a prominent, powerful woman. Could it be that the only way to get the public's sympathy if you're a strong woman is to be cheated on?

In the public's eye, anger doesn't look as appealing on women as it does on men. Although John Neffinger and Matthew Kohut argue that compelling people must exude strength and warmth to get respect and recognition, they explain that gender stereotypes make this role harder to navigate for women. Because strength is traditionally associated with masculinity, strong women are seen in a negative light.

Neffinger and Kohut's research explains why someone like Elizabeth Warren has been called "unnecessarily aggressive," with a YouTube that is actually titled "Why Is Everyone Afraid Of Elizabeth Warren?"

This double standard is even worse for women of color, who are already too often boxed into the category of the "angry black woman." For evidence, one need look no further than to Michelle Obama's rather neutral response to a heckler, which was grossly exaggerated in the media.

The media freely admits to this imbalance. On Morning Joe, Joanna Coles, Cosmopolitan's editor-in-chief, noted that sexism is obvious in the way that the media tells stories "Male congressmen, male senators are always described as ‘stating’ something in the House. Women senators and congresswomen are always described as 'complaining'. Women are emotional; men are somehow stoic," she said.

As Neffinger and Kohut point out, men who are angry don't only get more respect, status, and better job titles — they also get higher pay Despite the fact that men can use anger to achieve status, women may need to be calm in order to come off as rational. You know, so that people don't think they're PMS-ing, or whatever.

So, what's the solution?

John Neffinger and Matthew Kohut think it's not up to women to conform by replacing strength with warmth, but rather to increase their expression of both. They cite Oprah Winfrey and Ann Richards as masters of this fine balance.

Although our culture is still largely uncomfortable with angry women, there is some light at the end of the tunnel. For instance, we are becoming more comfortable with Hillary Clinton's impassioned speeches, like the one she gave at the Benghazi hearing. Even Elizabeth Warren's impatience with the government shutdown had seemed to at least correlate with her steady climb in the polls. In an interview, John Neffinger told me he is hopeful because Warren has an "ability to tear hypocrites's argument to pieces with a lilting folksy cadence and a friendly smile." All of the pictures being shared of her within her base "pointing angrily with her brow in full furrow" is a sure sign that she has managed to "appeal to everybody."

If Neffinger is right, maybe we've all calmed down about angry women. I certainly hope so, because as Elizabeth Warren well knows, there's plenty for all of us to be angry about. We'll need strong, warm, passionate women like her to help lead us out of the mess we're in.

What do you think? Can women navigate this emotional double  standard? Should they? Let me know on Twitter and Facebook

Compelling People is on sale at Amazon or at any local bookstore.

Is Newsweek's Explosive Tampons Feature The Most Sexist Cover Of The Year?

Some Idiot Told Jennifer Lawrence She Was Fat, Her Reaction Is Priceless